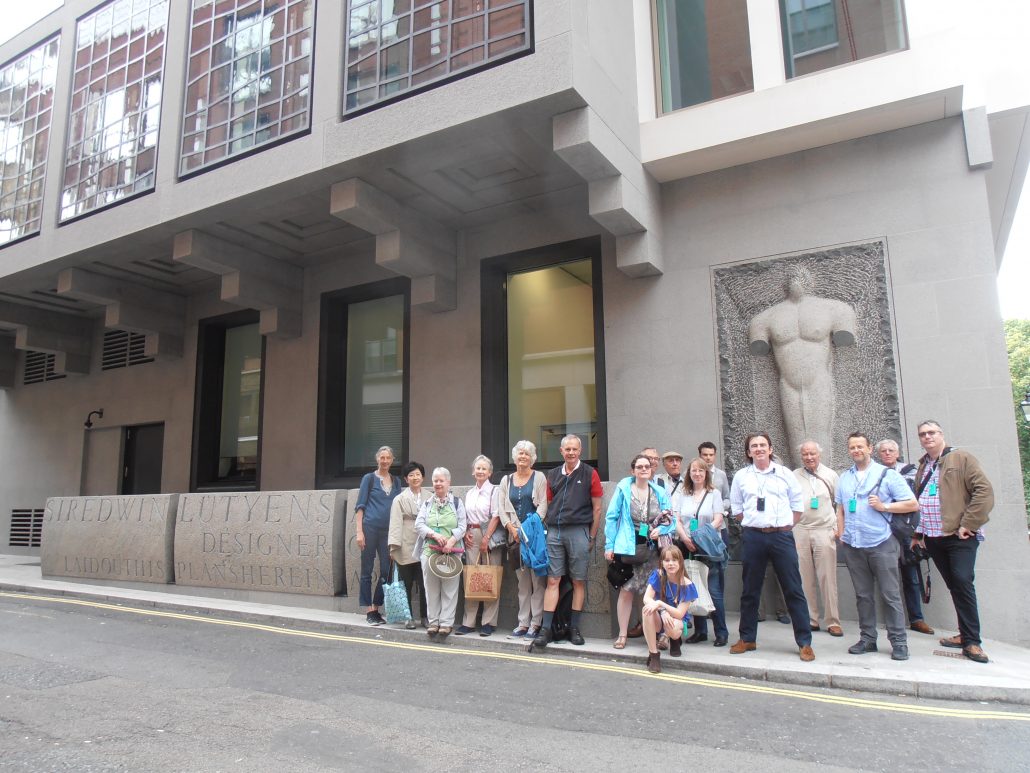 A group of over 20 of us met for a walk that was a repeat of one taken 20 years ago. The idea was to follow a random route from Westminster beyond Smith Square to Trafalgar Square and look at the wide variety of work undertaken there by Lutyens. By the late 19th century, the area around Westminster and south of St James’s Park had deteriorated into multiple-use buildings and slums. However, in the early 1900s, MPs were rediscovering the area’s 18th-century houses, so we saw three which Lutyens had renovated and modernised for people associated with Parliament. Two pre-World War II houses were renovations, the first for the Lyttelton family, who commissioned Greywalls. Then there were three smallish houses combined into one — a townhouse occupied by Lutyens’s brother-in-law, the Earl of Lytton, and later leased to Eva Lutyens, wife of Lutyens’s architect son Robert, as the premises for her exclusive dressmaking business in the 1930s.

We then saw a late 1930s renovation for Secretary of State for War Leslie Hore-Belisha and two very important conjoined new-build houses. The first was Mulberry House on Smith Square, built for Liberal politician Reginald McKenna, chairman of Midland Bank, and The Corner House, Cowley Street and 8 Little College Street, both designed in 1911 for Lady Norman and her brother, the Hon Francis McLaren, a Liberal MP. Opposite these were two houses designed in 1931 by Lutyens’s pupil Oliver Hill, called Gayfere and North Houses, which we also looked at. St John’s Institute, Tufton Street was designed by Lutyens as a parish hall for St John’s Church, Smith Square, where Archdeacon Wilberforce, a friend of Lutyens’s parents, was the rector. This was possibly Lutyens’s first work with an external design in his so-called “Wrenaissance” style. Before entering St James’s Park, we stopped at 15 Queen Anne’s Gate, home of Country Life magazine founder Edward Hudson, which Lutyens altered internally in 1906, and at No 17 next door, Lutyens’s own office from 1910 to 1931. And we passed 15 Catherine Place, designed in 1938 by Robert Lutyens for the Hon James Borthwick.

Crossing the park into St James’s, an area that remained a well-heeled residential neighbourhood throughout the 19th century, we saw Lutyens’s block of flats in Pall Mall built for Victor Behar, the large townhouse in St James’s Square created for the Farrer brothers and the Crane bathroom and plumbing showrooms, complete with
the first UK use of the Delhi capitals. From here we walked to the Lutyens memorial in Apple Tree Yard, designed by Stephen Cox RA, and into Trafalgar Square where we were unable to admire the memorial fountains to Admirals of the Fleet, Earls Beatty and Jellicoe, as the square was closed for a festival.

Encompassing large blocks of chequerboard council flats, house renovations, newbuilds of luxury houses, blocks of flats and high-rise offices, the walk gave a very good indication of not only the range but also the expanse of the work of Lutyens’s practice in a small part of London. I can’t wait to start on our research on his work in Belgravia.