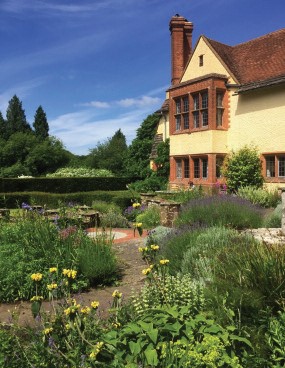 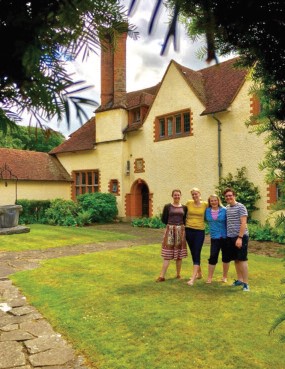 Rebecca Lilley (second from left) and SPAB scholars (from left to right) Lillian, Aoife and Kristian in the garden at Goddards. © Paul Waite

As one of this year’s Society for the Protection of Ancient Buildings (SPAB) scholars, I was delighted to get the opportunity to join the annual Lutyens Trust study day at Goddards and visit this wonderful house (pictured). The day began with tea organised by the lovely mother-and-daughter duo Helen and Rebecca Lilley. Martin Lutyens then gave us an introduction to the day, telling us about the house, commissioned by Sir Frederick Mirrielees as a holiday home for “ladies of small means”. The house was designed and built from 1898 to 1900 by Edwin Lutyens, and extended by him in 1910 to become a family home. The garden was created by Gertrude Jekyll.

Architect Ashley Courtney then talked us through the process for the recent restoration of two of the five original bookcases in the library — currently used by The Lutyens Trust as its office and for meetings. This was needed to provide space for the book collection and archive recently left to the Trust by the late author, journalist and one of its long-standing members, Michael Hanson. The two bookcases had been cut down some decades ago to provide the then owners with more space to play billiards. The restoration involved the intricate job of returning them to their original height to match that of the other three and the reuse of original Lutyens plinths and top mouldings (which had fortunately survived). The work revealed that the bookcases had originally been stained black and this finish has been reapplied.

Next, architect Michael Edwards spoke about the various Lutyens projects he had worked on including Orchards, Marsh Court, Little Thakeham, Ednaston Manor, Sullingstead, Chinthurst Hill and Folly Farm. It was fascinating to hear Michael compare the houses Lutyens created at different stages of his career and how Michael approached the projects differently according to whether they were repairs, conservation work or extensions.

After a delicious lunch in the garden, we headed to Forest House. Here we were welcomed with a cool drink and a wonderful tour given by the owner. The house overlooks Ashdown Forest and has the best example of a ha-ha I’ve ever seen. Forest House was built in the 18th century with Lutyens making minor alterations to it in 1897, then major ones in 1905. Inside is a double-height entrance hall overlooked by two balconies. The new owner is currently carrying out repairs and renovations, and it was wonderful to see the original fireplaces, for example, being returned to their former glory.

We, the SPAB scholars, were then lucky to return to Goddards where we had time to sketch, play skittles and explore the house. We would like to thank the Trust for a wonderful time and hope to revisit this beautiful setting.