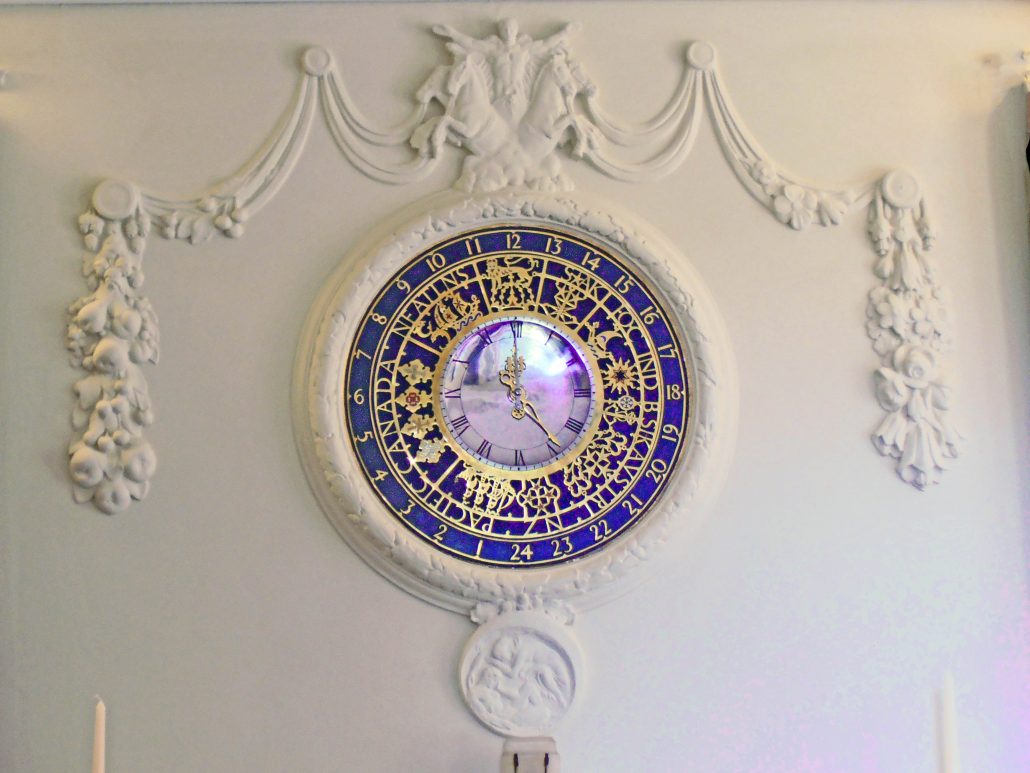 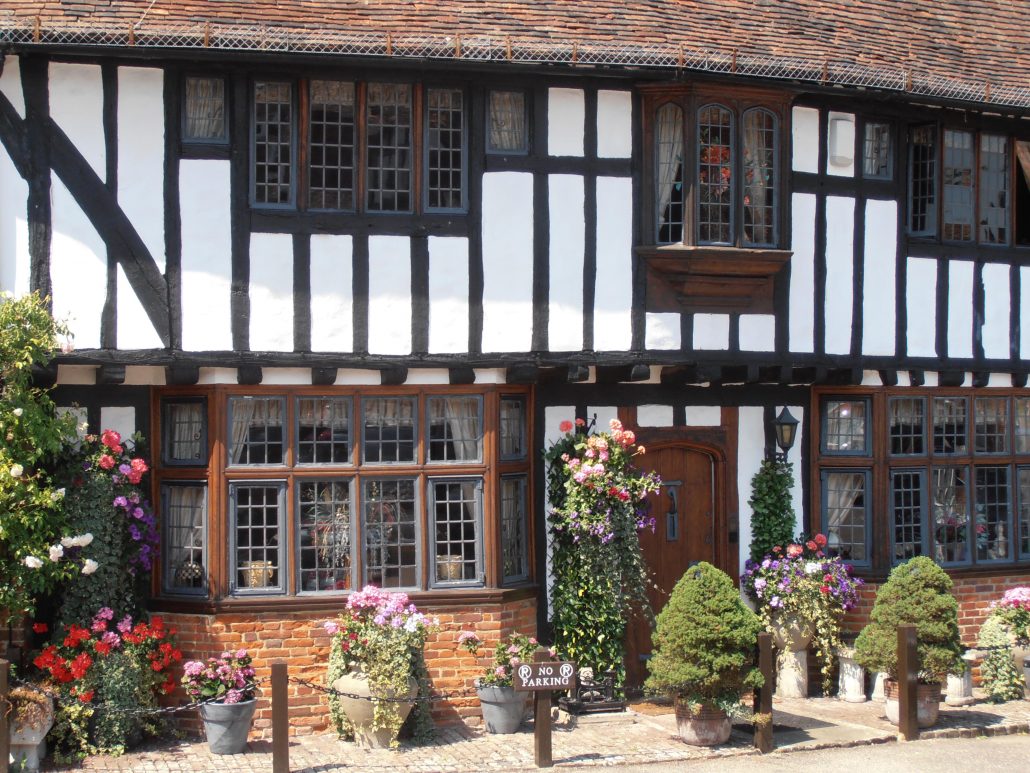 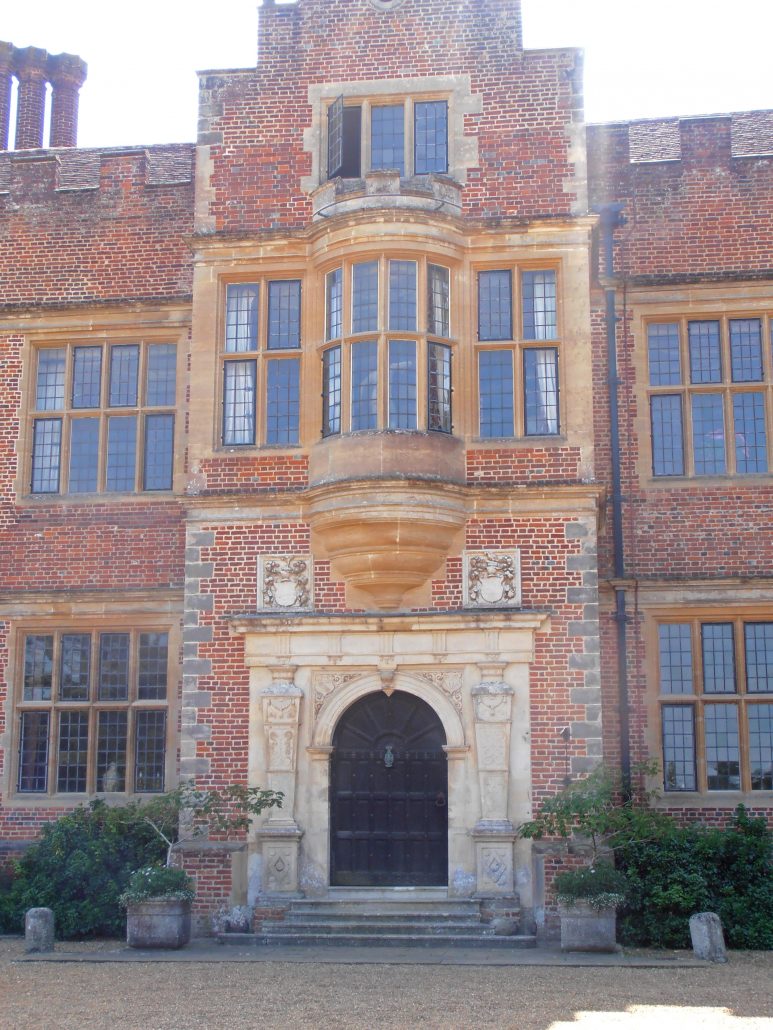 Visits to Herbert Baker’s own House, Owletts and to his Project Chilham Castle

Surely reminiscent of Sir Herbert Baker’s days in South Africa, our party of 11 were treated to a scorcher of a day from start to finish with 29°C and sunshine. We were greeted by David (great-grandson of Sir Herbert) and Bella Baker, the current occupants of the architect’s childhood home, Owletts, in North Kent. This Grade-II* listed 17th-century country house was built as a yeoman’s house and was first handed to the Baker family through marriage (to the Edmeades family of Nurstead Court). Herbert was born there in 1862, and in later life returned to the house, making improvements through additions and alterations. The house, which has been owned by the National Trust since his death, aged 83, in 1946, was full of delights and surprises. Michael Baker (Herbert’s grandson) and a volunteer guide entertained us with stories of Herbert’s exploits in South Africa, his early works with a young Lutyens (the two, we were told, frequently exchanged notes and ideas on their commissions), and his work for The Bank of England. The highlight of the sitting room, which was opened up to the entrance hall by Baker, was the beautifully decorated brass and blue enamel, world-time over-mantel clock (pictured, top left).

This innovative design by Baker, originally proposed for use in The Bank of England, features a brass plate depicting a number of key countries across the world which turns a full 360o daily to give the time in them in relation to England. Herbert’s idea was that it was important that an international institution should be aware of the time across the globe. Although the bank originally turned this idea down, his client later admitted its absence was an oversight.

The dining room emphasised the wit readers would be familiar with from Lutyens, but maybe not so much from Baker. The carver chairs surrounding the great table were topped with carved animals and other figures to represent various family members. Herbert is depicted as a great bear (“Bear” was his nickname), his wife is an “English lion” and his daughter (who could be both a learned young lady and a beast) is portrayed on one side as a sweet girl, nose buried in a book and on the other with her tongue sticking out. Owls were also a theme, and could be found carved into the furniture, cross-stitched inside frames and as ornaments in nooks and crannies. Further into the house was a library and magnificent wooden staircase culminating in stained-glass “oeil de boeuf” windows and a Baker ceiling which was awe-inspiring and full of symbolism.

Bella treated us to hot drinks and homemade cakes, buns and biscuits (shortly to feature in an Owletts-related cookbook) in the former workshop of successive Baker generations. All too soon it was time to leave Owletts for Chilham.

Chilham is a lovely, quintessentially English village, complete with a central square, Norman church and manor house (Chilham Castle). After a relaxing lunch — we could surveyor who has been leading tours of Chilham since 2003, came to meet us.

Michael explained how the village square — frequently a location for TV dramas such as Miss Marple and the 2009 BBC dramatisation of Jane Austen’s Emma — owes much of its current medieval appearance to Baker. The square is enclosed by terraces of houses and by the lodges of Chilham Castle. To the casual eye, the square appears to be a completely original medieval affair; indeed among the many houses are entire Wealden hall houses. However, with old photographs and historic sketches Michael illustrated that some black and white jettied houses (with overhanging second storeys) were Baker remodellings of Georgian and Victorian townhouses (pictured, middle left). This work had been carried out with such skill that even the villagers were unaware of the “cuckoos in the nest”.

The tour continued with an exploration of the geometry of the present Jacobean styled “castle” — Chilham Castle is actually a castellated house in the grounds of the older castle — whose keep is still intact. It was built for politician and diplomat Sir Dudley Digges in the early 17th century and, as Michael explained, had been subject to alterations since then. Successive owners had removed certain features (such as an oriel window and bow windows) only to have them reinstated as the house changed hands again. Baker’s work under Sir Edmund Davis (the owner from 1918 to 1939) included the creation of corridors to make the movement around the loosely hexagonal house flow better; the reinstallation of Jacobean-style windows and doors; the addition of panelling recycled from older (now demolished) buildings and the installation of further plumbing and electricity. There is no doubt in my mind that Baker successfully restored Chilham Castle to its original glory and modernised it in a way that has allowed it to continue to function as a family home in the 21st century.

Like Owletts, Baker installed great plasterwork ceilings full of symbolism — as seen in the first floor long room with its reinstated oriel window (pictured, bottom left). He added small extensions and made subtle adjustments to the castle’s many walls, which made the castle symmetrical in shape again, following early alterations by the Victorians under three generations of the Hardy family. Even the castle’s lodges were completely remodelled in the Jacobean style — a change from the Gothic-style twin lodges which were in place from 1800 to 1863, and the single castellated redbrick lodge of 1863 to 1922 which again disturbed the symmetry of the house and grounds. As a special treat for The Lutyens Trust, Michael gave a tour of the basement and service wings, including the wine cellars and “baronial hall”, which has a glamorous marble swimming pool — once covered over to house a special Battle of Britain exhibition. The day finished with a welcome drink in the former kitchen — a huge double-height semi-subterranean room, and a tour of the terraced gardens and kitchen garden.

On behalf of everyone who came, I’d like to thank the Bakers for their hospitality and superb refreshments, Michael for his informative, entertaining tour of Chilham and to Mr Stuart Wheeler for allowing us to visit his magnificent castle. In addition our thanks go to the owners of Castle Oak — a complete Baker cottage in the village — who allowed Michael and a few stragglers into their home.