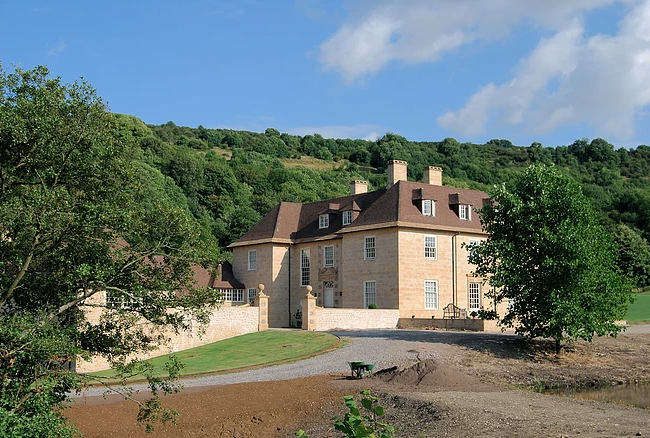 Following on from a visit to traditionally inspired new-build houses in Norfolk a few years ago, this was an entire day devoted to two new houses and one house extension — which doubles the size of the original building — created by Stuart Martin Architects. Originally working on conservation, the practice now is more involved in new-builds in the classical and vernacular idioms. The firm has worked all over England — from the Lake District to Cornwall, from Norfolk to Herefordshire. For us visitors, there was a convenient concentration of three new family homes in Devon to see. These were built in very diverse settings (one is as yet unfinished). All have been well-received, and one house will be featured in Country Life magazine later this year.

One of the great pleasures of visiting newly built houses is that not only is it very likely that the architect will be on a tour of this kind but that you get the opportunity to meet the clients, too. In this case, we met two of them, although all three gave us free rein to wander through both the house and grounds. Watching Stuart with his clients, it was interesting to think about how Lutyens must have been with his own, guiding them towards the designs he preferred. These days the relationship is obviously much more informal and cooperative. In all cases, the stonework looked were new — so it was difficult to reconcile this with the way that the buildings sat so well in the landscape and created such harmonious compositions. But in time, surely the landscaping will mature and the stonework mellow.

Some of the Lutyens-inspired work was so subtle that the connections with his work had to be pointed out. But there was much evident joy in the creative use of taking Lutyens as a starting point for the buildings rather than copying his work. Years ago, I remember Roderick Gradidge boasting that he had just photocopied a Lutyens door case design for a particularly difficult client but here there was a great sense of looking at Lutyens principles instead of combining a mass of copied detail. As with the exteriors so with the interiors: mouldings, ceiling plasterwork and above all fireplaces and staircases showed careful study of much of Lutyens’s work.

However, internal layouts showed how much was required that was different to Lutyens’s design in keeping with a modern lifestyle. Although there was still the procession in the formal spaces, each house had a large kitchen, dining and living room — and there was much greater importance given to children’s rooms and many, many more bathrooms than in Lutyens’s day.

Another obvious point of difference was the high level of technology in the newbuilds — to the point that one house had a room devoted to security, sound, temperature and other systems. I feel very privileged that we were allowed access to these houses. They were all a great joy to see and admire.

Visits to Herbert Baker’s own House, Owletts and to his Project Chilham...