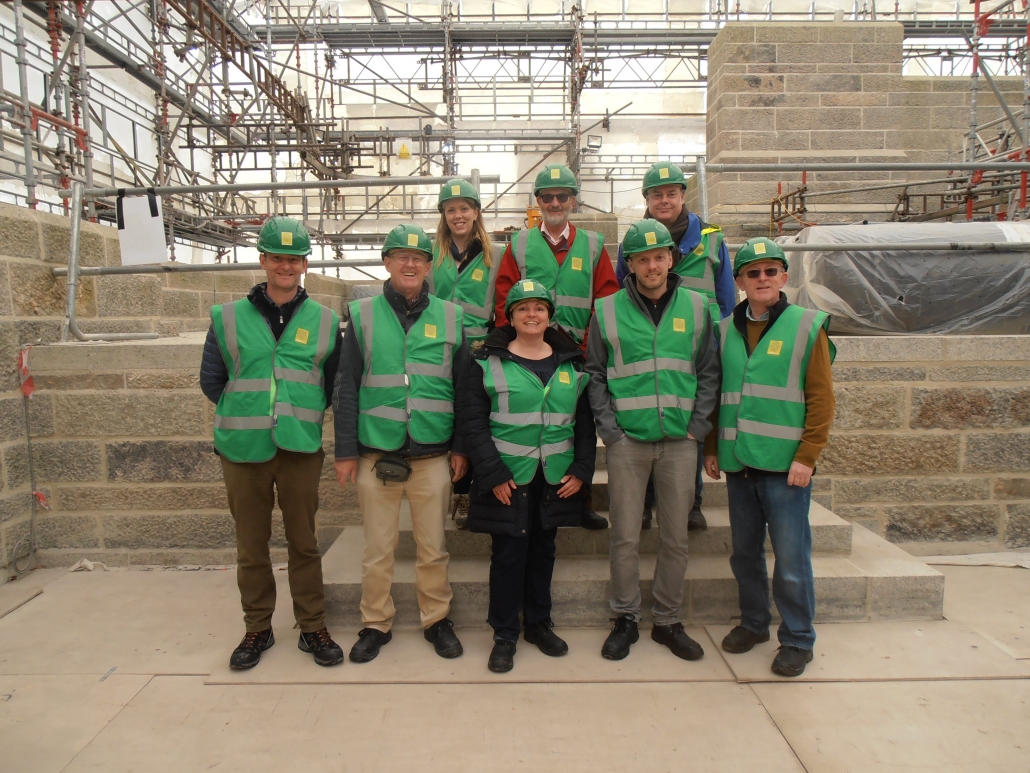 A group of Lutyens Trust members on the roof of Drogo. © Rebecca Lilley

By Peter and Yvonne Grant

There was a sense of déjà-vu when members who had signed up to the trip to Castle Drogo last October received an email from Rebecca Lilley, Trust Secretary, two days before this trip, informing them that it had been postponed from 27 April to the following day as the site would be closed due to another storm. As a result, some people could not make it but the reduced party enjoyed a fascinating, varied visit.

We began at Lutyens’s Castle Cottage, also known as Laundry Cottage. Nestled on a hillside just out of view of the castle, it was originally shared by the gamekeeper and laundry maids, although they had separate accommodation. We got a good feel for the limited space they lived and worked in, which, although compact, didn’t feel mean. By contrast the castle’s vertiginous façade is awe-inspiring. Lutyens often built on hillsides but in this case what a hillside, set high on Dartmoor with its desolate moorland and deep wooded valleys!

We were privileged to be shown round the castle’s private six-bedroom apartment by Charlie Johnstone, whose family has lived there ever since they gave Drogo and its grounds to the National Trust in 1974. It was Charlie’s great-great grandfather Julius Drewe who commissioned Lutyens to design Drogo. Despite the castle’s size and the grandeur of the setting, it provides homely family accommodation.

As has been reported before in the Newsletter, the National Trust, which owns the castle, has been undertaking a major project to stop the damage caused by water entering its roof, walls and windows. When the works started, all the contents of the castle had to be moved. Charlie showed us an example of these — a large chest of building bricks, temporarily stored in a stairwell, which he had played with as a child, not realising at the time that they had been designed by Lutyens.

Our tour of the rest of the castle included the drawing room, now open to the public, and the chapel with its particularly fine vaulted roof — a generously large space that nevertheless feels intimate. There was much that was familiar, including detailing shared with Munstead Wood and the cliff-like nature of the main façade, also a feature of The Red House at Godalming, designed by Lutyens. Although built as a castle, overall there is a feeling at Drogo of space and light, which characterises so much of Lutyens’s work, and arguably the circulation areas are the most successful spaces.

One highlight was a visit to look at the ongoing work on the roof — wearing boots and hard hats was essential. In addition to gaining an insight into the work being done and the building’s structure, this gave us the opportunity to enjoy the magnificent views of the surrounding countryside.

After a stroll through Lutyens’s gardens, we went for a very pleasant walk in the adjacent valley, along the river, to visit the turbine house, also designed by him. Apart from its characteristically stylish roof, it is a plain poured-concrete building which still houses the original turbines, but with new generators, and supplies power to the National Trust’s visitor centre. This concluded a long and interesting day and our thanks must go to Rebecca for her fortitude in persevering with the visit despite the bad weather.