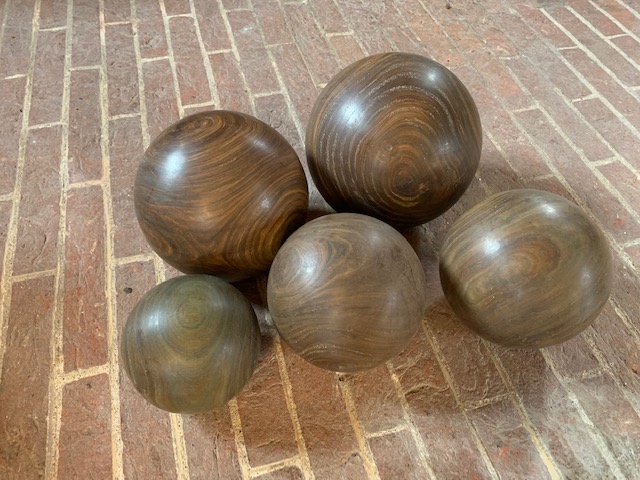 By Alastair Dick-Cleland, Project Development Manager at
the Landmark Trust

For 15 years, I had the great pleasure of being the surveyor at the Landmark Trust’s Historic Estate Department, responsible for the ongoing care and maintenance of Goddards, a responsibility that I have now passed on to my successor, Stuart Bacon.

But one of the last jobs I did in 2018, before taking up my new role as Project Development Manager, was organising the re-turning of the house’s wooden skittle alley balls. It had bothered me that on each inspection these seemed to be getting less and less round — more haggis-shaped than spherical! It was also quite a challenge to roll the balls in a way that they didn’t jump around and head off at odd angles.

While researching this online, I discovered that a woodturner named Steve Earis was based not far from Shottesbrooke (Landmark’s head office) at Burnham Beeches. Steve is a trained woodworker, who has discovered his calling as a woodturner (for more information, visit www.steveswoodenskittles.co.uk). His speciality is making the pins and balls for skittles. Pins come in all shapes and sizes often depending upon local tradition, and Steve can make them in any style you want.

Steve confirmed that all Goddards’ skittle balls are made of a wood called genuine lignum vitae, which I had understood them to be. Genuine lignum vitae, obtained from the tree Guaiacum Officinale, is a wonderfully heavy and densely grained wood, which is ideal for skittle balls but is now extremely rare and no longer available. Argentine lignum vitae has been used instead for these, but this too has become very scarce, so Steve now uses a timber called Angelim Vermelho.

Steve has re-turned every ball from Goddards so that they are now all perfectly spherical again, with a lovely smooth, shiny finish. He even managed to re-turn at least two balls that had suffered broken sections. They are inevitably a bit smaller now but otherwise look as good as new. What was also apparent is how lovely they smell. In fact, as Steve mentioned, lignum vitae has also been used as a perfumery ingredient.

Claire Hill thinks the balls may be the original ones, which makes them incredibly precious. Steve was very impressed by the size of the largest ones, which will have had to come from a tree that would be roughly 300 years old.

So the surviving Goddards skittle balls are rare and important. We should look after them, occasionally re-oiling them to keep them in good condition. I’m sure they will continue to give great pleasure to all those who have the opportunity for a game or two of skittles in Edwin Lutyens’s delightful skittle alley, about which he wrote, “We played a game of skittles in my alley. I like using the things I make”.