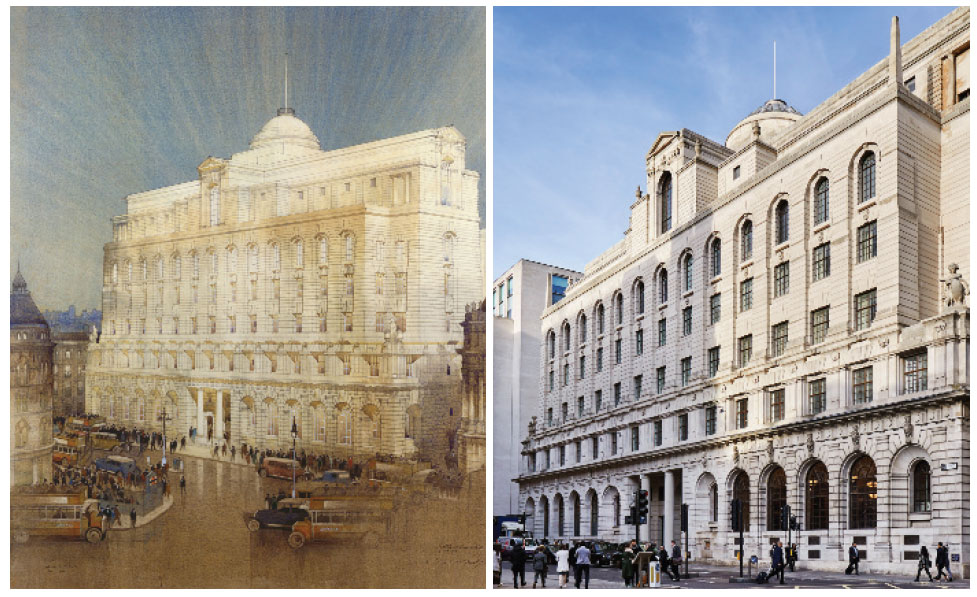 Left: Drawing of No 27 Poultry, former HQ of Midland Bank, by Cyril Farey. Courtesy of The Ned

Right: The building as it is today — its façade has recently been cleaned. Courtesy of The Ned 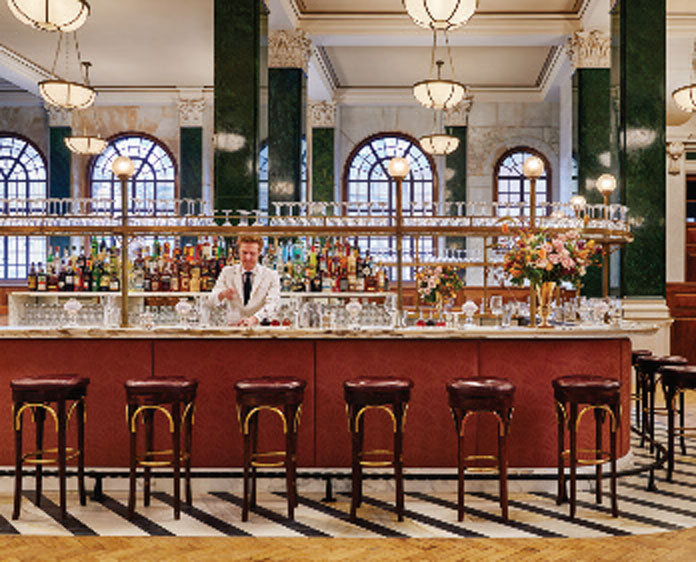 A bar in the hotel. Courtesy of The Ned

Visit to No 27 Poultry, former Midland Bank HQ, Now to be a Hotel called The Ned

Edwin Lutyens designed this Grade I-listed building in 1924 as the headquarters of Midland Bank in the City of London, returning to extend it from 1935 to 1937. Following Midland’s acquisition by HSBC in 1992, the building was vacated, stood empty for several years and was eventually bought by a private investment company.

This new owner has entered into a venture with Soho House and New York hotel developer Sydell Group to convert it into a five-star hotel with nine restaurants and bars, a rooftop terrace with a swimming pool and another pool and a spa in the basement.

These companies consulted The Lutyens Trust at several stages of the planning of this hugely complicated project. They also commissioned Candia Lutyens to supply lighting fittings and a replica of a Lutyens clock for the reception area. As a result of these commissions, Candia and I were invited to look round the building in early February.

On entering via its Prince’s Street entrance, we were equipped with high-vis jackets, steel-toe boots and hard hats. The need for these soon became apparent: the banking hall and the lower-ground floor, including the strong room, were alive with construction teams, equipment and materials. As we took all this in, it was a relief to find that considerable care was being taken to protect the banking hall’s great green verdite columns and other elements of the original design. We noted that the ceiling lights in the banking hall, which replaced the original ones at some point during Midland’s occupation, had themselves been replaced with others replicating the original design. The lower-ground floor was being significantly altered, with the installation of the pool and spa, though the great, round strong-room doors, marble staircase and safe-deposit corridor and boxes remain intact. We both thought, however, that the conversion of the lightwell in the banking hall to a platform for a piano struck an incongruous note.

Next, we were taken to the roof, where a terrace bar and the other pool are under construction, then down to the fifth-floor boardroom corridor and lobby and into the boardroom itself with its panelling and tapestries. Our tour was too short to investigate what role these grand spaces will play in the overall scheme but they are obviously not susceptible to change, and we were left with a feeling of relief that the new occupants have the sense and understanding to leave these spaces untouched, including Lutyens’s boxes for the former Midland directors’ top hats.

This enormous project is due for completion before the summer. But because of the huge amount of work that remains to be done, we shall have to wait until then to judge how well the proprietors have struck a fitting balance between conservation imperatives and the demands of a modern five-star hotel. However, our visit was encouraging as it left little doubt about how seriously they are trying to achieve both.

A Tribute to Charles Lutyens