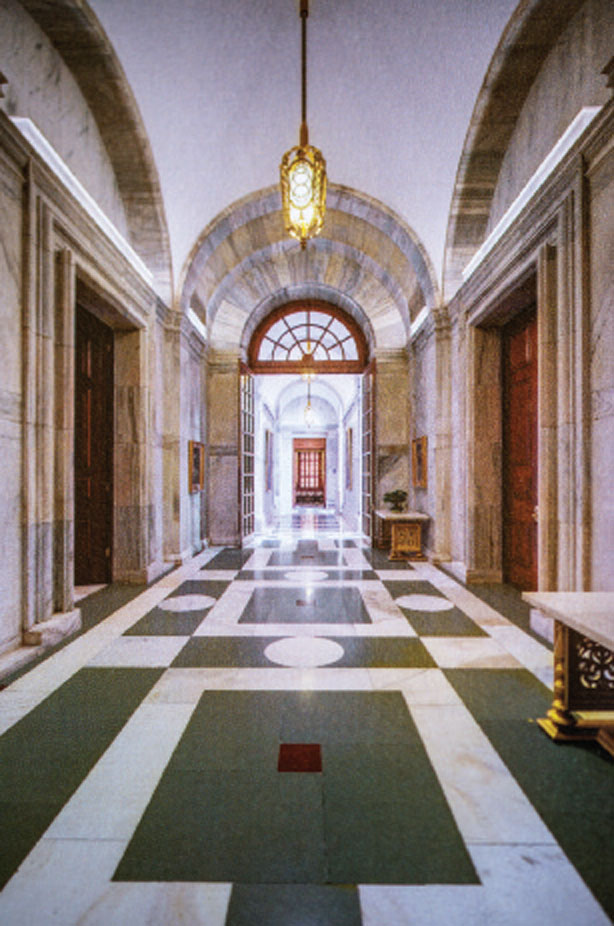 Images from The Arts and Interiors of Rashtrapati Bhavan: Lutyens and Beyond.
Above: A corridor in the house.
Below: A variation on Lutyens’s Delhi Order in its Durbar Hall. Photos © Joginder Singh 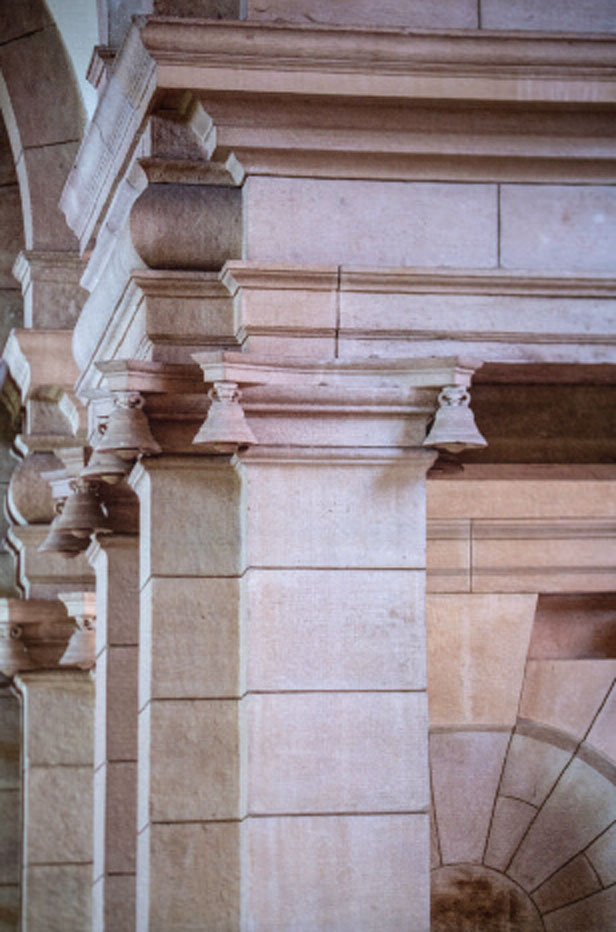 The Indian government has achieved a remarkable feat in its initiative to produce a seven-volume set of books, billed as an “encyclopaedia” of the history, design, politics and life in and around the Rashtrapati Bhavan, formerly Viceroy’s House and, arguably, the pinnacle of Lutyens’s achievements. The Secretariat of the President of India, Rashtrapati Bhavan and the Indira Gandhi National Centre for the Arts (IGNCA) in New Delhi commissioned Sahapedia (a not-for-profit society) to execute the project, and the present volumes were published by the Publications Division.

The set includes volumes on the Presidential Guard, dining at the President’s table and the gardens. All follow the same pattern of illustrated essays edited by different experts in their respective fields. It is a pity that the tremendously hard work that has gone into these volumes is not necessarily matched by their production values and that there is no consistency in terms of layout or even typeface across them. Eventually, I believe, all the essays will be available to read on an interactive web portal.

My review focuses firstly on the volume devoted to the house, its construction and the political and sociological history of how it came to be built and secondly on the volume on its interiors. Before saying anything about the second volume, I must declare an interest: I was involved in the project, albeit temporarily.

The first, called A Work of Beauty: The Architecture and Landscape of Rashtrapati Bhavan, is edited by Narayani Gupta with photography by Ram Rahman. I cannot write another word without praising the sumptuousness of the latter. It is extraordinarily good and, as a record of the building, the book is worth owning for this reason alone. It begins with a very thorough, largely complimentary — to Lutyens — essay on the historical context and political and architectural background of how the house came to be built. The second chapter, “The Struggles with Modernity 1870s-1920s”, by Amit Srivastava, is as important and good a summary and analysis of Lutyens’s work as I have read recently and looks at his “robust engagement with the questions of modernity”, drawing the conclusion that he was much more forward looking
in his embrace of the machinery of modernisation than many may have realised at the time and that the East/West question, though clearly apparent, was possibly a subservient issue. While others focused mainly on what style to use, Lutyens grasped what a modern government building and city needed to function well.

Less thought-provoking but equally important is Rajir Narain’s chapter, “The Architect: A Singular Clarity 1912-1931” — essentially a detailed walk through the building. Indeed, its painstaking attention to detail matches that of Lutyens, and it is a valuable study tool for those who have never visited the house and a great aidememoire for those lucky enough to have done so. The final chapter, “Some Reflections” by Benjamin Tindall, is a lovely homage to Lutyens and wraps up what is a well-executed, beautifully illustrated and substantial work that will appeal to professionals, students and amateurs alike. It also has a useful bibliography and nice set of graphics, one of which — entitled “Demystifying Styles” — represents a timeline from the Parthenon to the Rashtrapati Bhavan.

During my involvement with the second volume, I didn’t meet all the authors, but I can attest to their expertise in their respective fields. Entitled The Arts and Interiors of Rashtrapati Bhavan: Lutyens and Beyond, it explores the interior detailing, paintings, textiles and furniture in the house, dating both from the Raj and post-independence eras. It was co-edited by Naman Ahuja and Partha Mitter with photography by Joginder Singh. Sadly, the imagery doesn’t live up to the superb standard of the first volume but, to be fair, a lot of it consists of details of particular works of art and objects. A minor irritation with this volume is that Lutyens is occasionally misspelt “Luytens”.

Ahuja’s opening chapter on the language of design in “Lutyens-speak” is a very interesting study that looks at the two and three-dimensional dynamics and relationships between various volumes of space and planes of floors at the Rashtrapati Bhavan. It is well worth reading.

Less interesting is the very politically charged and — uniquely in the volumes I have read — anti-Lutyens stance from Mitter, who chose to write his chapter on the murals of Baker’s Secretariat buildings, oddly in a book about Rashtrapati Bhavan. Students of the early 20th-century, nationalist art movement, the Bengal School of Art, will no doubt find this fascinating.

Sadly, I struggle to find enthusiasm for the subject or the murals. I equally struggle to get too excited about the collection of pre-and post-Raj artworks and textiles featured, although students of both will enjoy the thorough detail with which this has been explored.

Originally, I was asked to write the volume’s chapter on furniture, which came to be written by Laura Ongaro. I cannot agree with its conclusion — described by Ahuja in his opening chapter as “startling discoveries” — that Lutyens always intended his furniture to be painted gold, gold leaf being out of budget. This is not backed up by any evidence. I will never believe that Lutyens intended any of his furniture to be either painted gold or gilded and I suspect that much of this happened well after his time.

All told, this is a superb effort to tackle what was a Herculean task. I suspect that a cherry-picking approach to buying these books is the way forward and these two volumes, plus the one on the gardens are probably those to go for. Certainly the volume on the architecture should be a must for any library on Lutyens. Sadly, purchasing these is for the moment only possible in India but I believe that The Lutyens Trust is seeking to open up possibilities to overseas buyers.