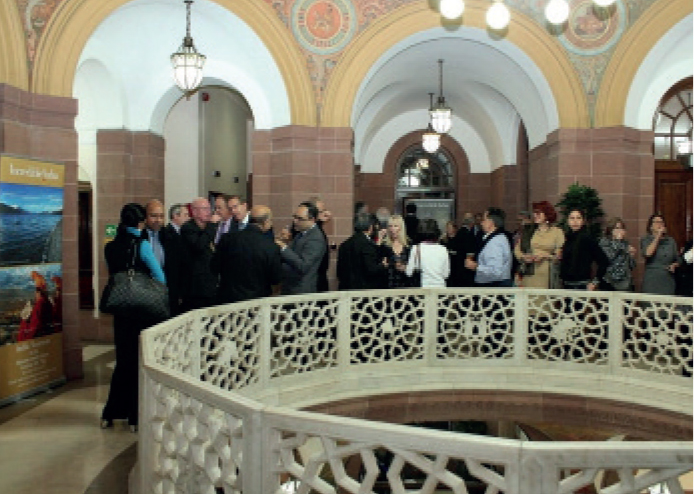 Nineteen very well-dressed Lutyens Trust members waited outside the Indian High Commission in Aldwych for me — rather nervously as we were slightly over its suggested limit on numbers — to check everything was in place for our tour. Going inside brought back many memories of previous trips to India and, in a way, also prepared me mentally for the upcoming autumn trip there next year. Indeed, the building felt familiar after the South African and Indian tours. Security at India House was tight but, once the staff had identified who we were, there were smiles all round and a wonderful eagerness to be helpful.

Proposed in 1925 by the Indian High Commissioner Sir Atul Chatterjee, the building was designed by Sir Herbert Baker and completed in 1930. Typical of Baker’s civic work, the seven-storey building is monumental, featuring modelled elevations with relatively small sculptural, decorative details of Indian derivation, such as Ashokan columns featuring stylised elephant bases and lioness finials at the front door, Indian jaali work and arcades. The principal interiors are dressed in red Agra sandstone.

Mr Niwas, the librarian, brought us into the entrance and gave us details of the subjects in the murals on the domed ceiling above the first-floor oculus gallery with its pierced-work balustrade, executed by Indian artists who also frescoed the dome. Baker, who made a point at New Delhi of using Indian artists for the murals at his Secretariat Building, arranged for them to be sent to London and Rome for special training in painting frescoes for India House.

We were also taken into the former reading room, then up the ceremonial staircase to meet 92-year-old Honorary Librarian Miss Travis, who had been working there since 1942 and had prepared notes for us on the changes to the use of the library — access to which had been previously severely restricted for security — during her time there. In fact, all the staff were very helpful, from the Second Secretary, Tara Pathak, who arranged the tour, to the people whom we met on the day. The afternoon was rounded off with a nice tea, during which the Acting High Commissioner, Ambassador Dinesh Patnaik, kindly broke off a press event happening there to chat briefly with us.

Visit to Peterborough Cathedral and Lutyens-designed Wing of the Bishop’s...