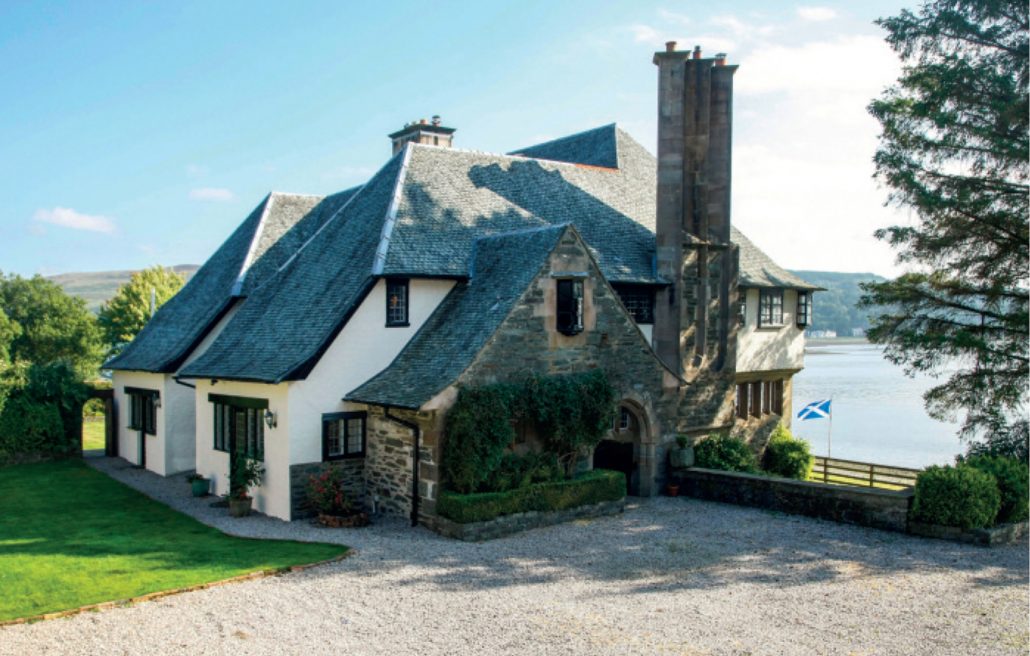 In 1871, HRH Princess Louise, the fourth daughter of Queen Victoria, married the Marquess of Lorne, later Duke of Argyll. He was Governor General of Canada from 1878 to 1883, she an accomplished sculptress, best known for her statue of Queen Victoria that stands outside Kensington Palace.

In the 1890s, they moved to the Marquess’s boyhood home, Rosneath Castle, near the tip of the Rosneath peninsula to the north of the Firth of Clyde (owned by the family since the 15th century). In 1896, the Princess acquired the nearby Ferry Inn on the shores of Gare Loch and, thanks to an introduction by Gertrude Jekyll, commissioned Edwin Lutyens, then 27, to alter and extend the building to create a dream cottage by the sea. The result was a spectacular example of Arts and Crafts thinking with Art Nouveau influences, described by architect and writer Harry Stuart Goodhart-Rendel as being where “we first feel there is magic in the air”. It is considered to be as architecturally significant as Charles Rennie Mackintosh’s Hill House in Helensburgh across the sea loch.

Lutyens’s addition to the house remains today, the original inn having been demolished, although the former ballroom was spared and is now a separate cottage. Built over two storeys on a raised basement, the house takes full advantage of its position overlooking the water. The south elevation has a huge stacked stone chimney to the side of the gabled entrance porch, from which at the upper level thin, vertical oriel windows wrap around the eastern elevation. These windows are in the same style as those at Le Bois des Moutiers at Varengeville-sur-Mer, designed two years later.

Princess Louise never lived in the house and in 1902 it became a home for soldiers wounded in the Boer War, then the Great War. It was later sold to the Government, forming an association with the military. During the Second World War, when the house was part of the American naval base at Rosneath, it is understood that Winston Churchill left from Ferry Inn to meet President Roosevelt at Potsdam and Yalta and Bob Hope and Dinah Shore stayed there while entertaining troops. By the late 1950s, the house was little more than a shell and was acquired in 1959 by a boatyard owner, Peter Boyle, who modernised it. The current owners have lived there for 11 years, have further updated the house and bought back the cottage.

Now Category A-listed, this fascinating house has four bedrooms, three bathrooms, a reception hall, three reception rooms, kitchen, breakfast room and utility room. The lower-ground floor includes a sitting room and bedroom. The Category C-listed cottage offers open-plan living space in a former ballroom, together with a kitchen and bathroom. The 5,000-sq ft property stands in four acres of gardens and grounds providing the most wonderful setting, including a private beach and sea-loch frontage. Available through Savills. Guide price: £795,000. 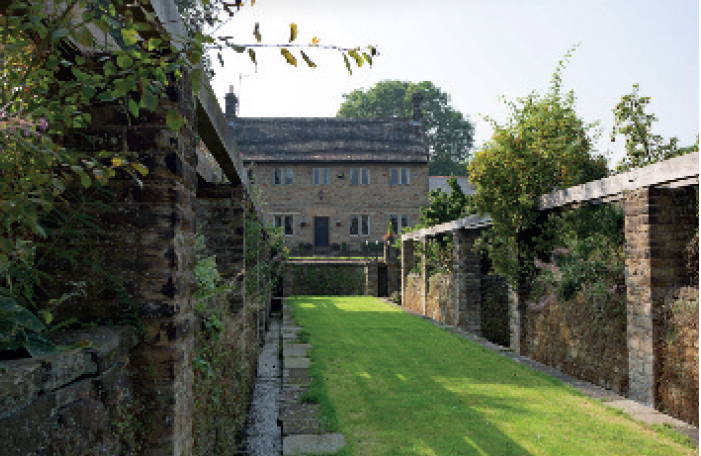 A property of intrigue has come to the market in Derbyshire. The Green is not a Lutyens house but an 18th-century sandstone building with a beautiful, restored, genuine Lutyens-designed formal garden, adjacent to the estate of Renishaw Hall, near Chesterfield. In 1908, Lutyens was the guest of Sir George and Lady Ida Sitwell at Renishaw Hall. Sir George was keen to engage the young architect for extensive works both at the hall and abroad. “They want me to do the garden, ballroom, great drawing room and dining room, etc,” Lutyens enthused. “Sir George wants to build a little water palace, one room, on the lake, which would be a delightful thing to do and build a house in Sicily which would be fun. He is going to take me to Italy!”

Alas, with the exception of the ballroom, these grand plans came to nothing. Sir George’s son, Osbert, later reflected, “Year after year, my father would regularly start a new hare to be coursed by the famous architect, but in the end would inevitably employ in his place a local architect, who would more readily fall in with his patron’s ideas”.

In this context it is remarkable that The Green’s garden ever came to be. Constructed in 1916 for Sir George and laid out in an Italian style, it is charmingly arranged with low coped walls and lawns. To the front of the house lies a water garden with rills at either side of a narrow lawn, which are fed from a pond within a semicircular apse flanked by stone piers supporting pergola beams. Another, larger lawn to one side is surrounded by low walls and yew hedges. In recent years, the Grade II-listed garden has been restored under the guidance of garden designer Alex Styan. The 4,700-sq ft, five-bedroom property is available through EweMove for £1.5m. 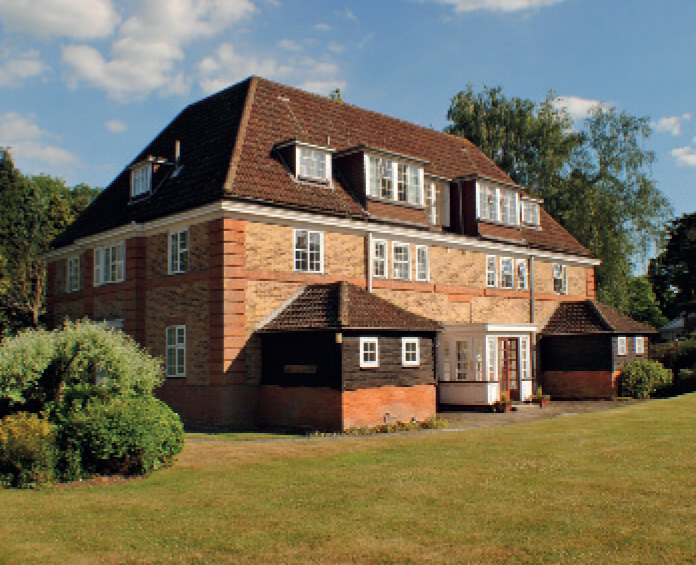 In its Edwardian heyday, Walton Heath Golf Club was not only the scene of first-rate golf but a social destination for political, media and society figures. Regular players included David Lloyd George and Winston Churchill. In 1905, a year after it was established, a group of investors, including Edward Hudson (founder of Country Life and a regular client of Lutyens) and Sir George Riddell, a solicitor and managing director of News of the World, bought out the founders. Riddell also acquired the surrounding land for its development potential. Through Hudson’s support, Lutyens designed one of the additional buildings, an annexe to the clubhouse, offering overnight accommodation for golfers, known as the Dormy House. This had 16 bedrooms and four bathrooms.

Architectural writer Lawrence Weaver described it thus: “The plan is a simple oblong, and the elevations are conceived in a spirit of symmetry and unaffected reticence. The big pantiled roof with dormers, the three bold chimneys, the whitewashed walls with base and quoins and string of red brick, the vigorous cornice and green jalousies make up a composition that is at once simple and pleasantly diverse.”

Unfortunately, the years have not been kind to the original design of this building, which has not enjoyed the protection of being listed. The chimneys have been removed, additional dormer windows inserted in the roof and the interior has been converted into apartments more suitable for modern living. Now one of these sizeable apartments, on the first floor, is for sale. Fully refurbished to a high standard, it features three bedrooms, two bathrooms, a 23-sq ft reception room and kitchencum-breakfast room. Available through Patrick Gardner. Guide price: £550,000.

Richard Page is marketing director for the London & Premier brands of Countrywide plc, and has advised on the sale of many Lutyens houses. Do please contact him with any Edwin Lutyens-related property news at rpage@countrywide.co.uk