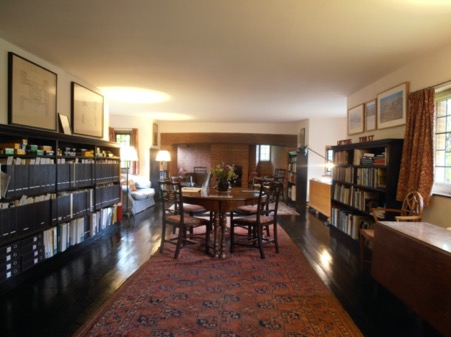 The library at Goddards. © Rebecca Lilley

Any of our readers who own an old property will be familiar with the pang of wanting to know more about the history of their home and its inhabitants. Luckily, The Lutyens Trust knows a great deal about the history of our headquarters – Goddards, designed by Edwin Lutyens between 1898 and 1900.

Most of this information, however, relates to its conception and to its time under our custodianship since 1991. Naturally, we have some information on its history under its successive ownership by the families of Frederick Mirrielees, Mr and Mrs Gibbs and, most of all, by Bill Hall and his wife Noeline. However, many details have got lost over time ­– not that all is lost. Should this happen to others wishing to trace the history of a house, I thoroughly recommend they visit their local archives for more information about it.

Recently, while indexing some donated papers in our archive, I came across a close-up photograph of Goddards showing a Building of Historic Interest plaque on one of its lime-washed walls. This was gifted by Surrey County Council and gave Goddards the building number 203. Sadly, no evidence of the plaque nor its position on the house remain. So, unable to resist solving this mystery, I contacted the Surrey History Centre in Woking and asked if I could view its file on Goddards. I was simply asked to submit a form to the Historic Environment Planning Department, requesting access to the file, and soon after my colleague Claire Hill and I were booked in for a visit.

The first documents in the file all pertained to The Lutyens Trust and to the work it undertook to the house’s interior, dating from 1910, when Lutyens extended the building. Of particular interest to me was a letter dated 1993 from Patrick Helme ­– very probably a specialist in historic paints – reporting his findings on the original decorative schemes. Today the walls are a creamy buff colour yet Helme’s letter revealed that the original colour was closer to white. For the library walls, he recommended the mid-tone, off-white colour No3 from Farrow & Ball’s National Trust collection. Most importantly Helme added that the external limewash had never been overpainted with synthetic paints as these would prevent the exterior of the house from ever being lime-washed ­– the appropriate finish for this type of building ­– without first stripping the entire house back to bare bricks. Quite the unenviable task!

Further into our research we saw correspondence between Bill Hall, who bought the house with Noeline in 1953, and various bodies, including English Heritage, Surrey County Council and Mole Valley District Council, which oversees this part of Surrey. In July 1970, Hall wrote to the chairman of the Records, Historic Buildings and Antiquities Committee at Surrey County Council (SCC). His letter highlighted Goddards’ historical importance and work he had already undertaken in rebuilding two chimneys and reroofing the nearby cottage. He then asked the council if it would provide a grant from its department, Historic Buildings Council, to repair the garage roof.

Space doesn’t allow for a full rundown of the correspondence thereafter. However, I can summarise that Bill Hall must have been very canny for he followed this letter with a request to have an “identification plaque” mounted on Goddards. Once approved and attached to the house, this would demonstrate the house’s importance and make it more likely that any further requests for grants for repairs and restoration would be approved. The plaque was indeed given the go-ahead for installation in October, 1970. Earlier in the year, in August, Hall had sought to have Goddards regraded from Grade III to Grade II and this too was approved in November. (Later correspondence suggests the building was Grade II*-listed soon after, too.) As a consequence of this, the council offered a grant of £35 in April, 1971 towards the costs of re-roofing the adjoining garage.

In 1985, Hall sought grants towards the costs of re-roofing Goddards itself ­– excluding the skittle-alley roof, which had been recently restored – with hand-made clay peg Swallow tiles. In his application letter, he wrote: “My wife and I are in our 70s and the cost to us is meteoric! But we wish Goddards to be preserved far beyond our time.”

This emotional plea obviously worked as the Historic Buildings and Monuments Commission (HBMC) awarded Goddards a grant of 40 per cent of an estimated £60,000 (for works undertaken over two to three years in four phases). Moreover, the Historic Buildings Section of SCC and Mole Valley District Council each awarded grants of £500 towards the first phase of the work.

One council member noted: “Mr and Mrs Hall have made the preservation of this Lutyens house something of a life work and have not been to us… for a grant before. The retiling and stone-slating of the roof will be for the benefit of posterity… and I feel we should offer a grant as well as HBMC.”

By May, 1985 the work was underway. However, Hall noted that one chimney that rises 45ft above ground required a complete rebuild owing to brick erosion and lightning damage. He paid for this work with money from his home insurance. By September, the first phase of re-roofing was completed, and Hall wrote to the Historic Building Inspector at SCC seeking assistance in again upgrading the listing status of the house, this time from Grade II* to I. This, he hoped, would help to give his application to The Treasury to set up a maintenance fund – “to support repairs and restoration of Goddards in future years” – more gravitas. What came of this isn’t known, but Goddards was never upgraded to Grade I and presumably work to the roof was completed as planned.

However, by August 1986 Hall was again looking for grants towards maintenance and this time he approached English Heritage (now Historic England). The grant subsequently awarded was breathtaking at £35,939. Among the largely standard grant terms was one that stated that Bill and Noeline would need to open Goddards for public viewing for at least 28 days in the summer, without the need for a prior appointment, and that this would need to be advertised on the roadside nearby using an English Heritage sign. This might have seemed an imposition but the terms were accepted.

The final entry in the file, prior to Goddards being gifted to The Lutyens Trust, is a copy of the planning permission application to install a wheelchair lift in the original kitchen (then a reception room) and bedroom above for use by Noeline, who by now was approximately 80. This must have been approved as the lift was still in place when Goddards was gifted to the Trust. The rest, as they say, is history.

Book Review by Janet Allen: The Edwardians and Their Houses by Timothy Brit...