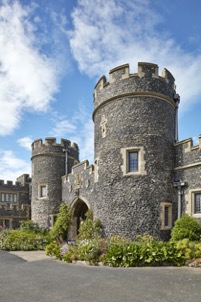 Kingsgate Castle and its restored entrance towers on the southwestern side. © Robin Forster, www.robinforster.co.uk

The Edwardians and Their Houses: The New Life of Old England (Lund Humphries, £45) is a very significant study of domestic architecture of the period when Edwin Lutyens was at the height of his career, and serious students of his work should read it. In recent years, there have been distinguished monographs of the most famous late 19th and early 20th -century architects, such as Lutyens, Richard Norman Shaw, Philip Webb and Ernest George. But with this book, Dr Timothy Brittain-Catlin, an architect and Reader in Architecture at Kent School of Architecture and Planning, has embarked on a sociopolitical investigation of the influence of a political class on architecture, which resulted in highly desirable housing.

The popular image of the Edwardian era is of social stability before the First World War. But in reality it was a period of radical political and socioeconomic change, driven largely by the Liberal Party, which was in power for much of the time from 1880 until the outbreak of war in 1914. Brittain-Catlin has a distinguished heritage – he is a scion of a great radical family, grandson of writer and nurse Vera Brittain and nephew of politician Shirley Williams, so he is steeped in the early traditions of the party and brings to his subject his professional training as an architect. He has delved into the archives of two significant political families, the Lubbocks and the Caringtons, in addition to those of the wider Westminster class, for instance David Lloyd George, the Tennants and Lytteltons, powerful press barons, industrialists and department-store owners. The period saw the emergence of municipal authorities as major providers of decent housing and of garden towns and suburbs. As architects’ clients, they were not only concerned with style and planning, which embraced modern convenience and the integration of old and new fabric, but also the wider issues of land tenure, rural poverty and city slums. The Liberals invested an immense amount of time, money and thought into housing for the whole population ­– rich, middle-class and poor – and this book provides the detailed background to Jane Brown’s more personal investigation of Edwin Lutyens’s relations with his clients.

The book is beautifully produced with specially commissioned photography by Robin Forster, which complements contemporary black and white photography from the Country Life archive, other publications and family snaps. The immediate impression is of “desirable properties” – in estate agent jargon – but sadly the names of most of the architects are less familiar to the general public. One example is WH Romaine- Walker, who was very successful and transformed Kingsgate Castle on the Kent coast for banker John Lubbock, 1st Baron Avebury. Similarly, Charles Wynn-Carington, 1st Earl Carrington from 1895, later Marquis of Lincolnshire employed William Hewson Lees to extend the farmhouse in Daws Hill, High Wycombe to house his family after he sold Wycombe Abbey.

Both houses are fine examples of blending the old and new, resulting in comfortable homes; at Kingsgate there was the new amenity of a motor house. Another innovation was the weekend “dormy” house – a building providing accommodation near golf courses, which spawned the estates of medium-sized houses like those near Tadworth, Surrey, for example Cliftondown (now Pinfold Manor) at Walton-on-the- Hill, built by newspaper publisher George Allardice Riddell for David Lloyd George. Nearby was Chussex, which was designed by Lutyens.

The Liberal government passed much land reform and town-planning legislation, which resulted in the clearing of slums and redevelopment of areas like Millbank, Westminster, where architect-designed housing and office accommodation were centred on Smith Square.

In the area of Gidea Park in Romford, Essex are fine examples of Edwardian domestic architecture where houses costing from £375 to £500 were marketed. The driving force behind this was two Liberal politicians – Lord Carrington and Herbert Raphael, a barrister – who both served on the London County Council.

This book does not just discuss style but explains why there was such a flowering of domestic housing in the early 20th century.

An article by Martin Lutyens from India Today, published on 23 March, 2020