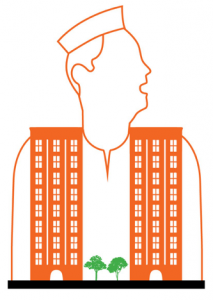 An article by Martin Lutyens from India Today

New Delhi ranks among the world’s greatest and most beautiful capitals. It is, therefore, no surprise that the Indian government’s plans to revamp its Central Vista have received a mixed response.

It is obvious that the government cannot manage with its existing buildings and that change is needed to accommodate increased numbers of legislators, civil servants and a constantly changing technology. The Lutyens Trust understands these pressures, but feels, like many conservation bodies, architects and urban designers in India, that the timescale for implementing these changes is too short and the process lacked both proper public consultation and study of the environmental impact. These questions are for the Indian government and other interested parties in India to settle. New Delhi, however, represents a vital part of Sir Edwin Lutyens’s heritage and The Lutyens Trust feels justified in respectfully contributing its views.

First, a word about Sir Edwin: commentators in India complain that he criticised Indian architecture. He was indeed critical but this needs context. Lutyens criticised all other architects and architectural styles and Indian architecture was no exception. He was under pressure to build New Delhi in a style – a strange Anglo-Mughal hybrid known as Tropical Gothic – whose pseudo-oriental borrowings he abhorred.

Although initially prejudiced against this and other forms of mock-Indian style (for example, the Indo-Saracenic then prevalent in Bombay and Calcutta), he soon came to appreciate the beauty and climatic value of many Indian architectural features and incorporated them into buildings, which nevertheless obeyed the rules of Classical European architecture. Thus Rashtrapati Bhavan incorporates chhajjas, chhatris, stone lattices, courtyards, fountains and water runnels, stone elephants (he was very fond of elephants) and the fine Buddhist dome.

This fusion of European Classical, Islamic and Buddhist ideas in a wholly original way is something that a person with a fundamental dislike of Indian architecture could never have achieved: and all this laid out in the grand manner on an axial vista, influenced by the National Mall in Washington DC and reflecting his belief that the principles of geometry were eternal and could be applied anywhere.

Secondly, images on the internet of the plans for the Central Vista include two rows of vast buildings flanking the Rajpath, Lutyens’s National Archives of India building surviving among them. The buildings are hollow squares, the exterior walls of red sandstone and interior walls of steel and glass. Official commentary claims that Lutyens “planned for structures along the Rajpath, so nothing new here”. Not so: Lutyens planned only four buildings, where the Rajpath and Janpath intersect, of which only the National Archives of India was built.

The new buildings do, however, have a respectful symmetry to them. It is also good that they are planned not to exceed the India Gate’s 139ft. Lutyens carefully scaled his buildings in relation to the tree-planting in the city and it would be wonderful if the new buildings followed his approach. But at even considerably less than 139ft, these buildings will dwarf tall trees, making the Rajpath more an urban canyon than a grand processional way. It is unclear how this will “reinforce the character that Lutyens imagined” as claimed for the scheme. Lutyens would surely have gone for lower buildings, set further back, including features – cchajjas, columns or other regular vertical accents and judiciously placed pavilions – to relieve these straight, monotonous rooflines.

Thirdly, it is good to see that some of the trees in the computer rendering are newly planted. But many trees in Delhi are nearing the end of their lives and will need replacing soon; one hopes in an orderly not piecemeal fashion. Though less spectacular than the Central Vista revamp, trees are critical to providing shade and lowering Delhi’s pervasive pollution. Sadly, in its haste, the government seems unlikely to pause for a proper assessment of the project’s heritage impact or change the direction of its plans. But a proper environmental impact assessment and strategy for replacing the original trees to secure shelter from the sun and lower pollution for future generations should surely not be controversial.

Book Review by Janet Allen: The Edwardians and Their Houses by Timothy Brit... Scroll to top
This website uses cookies to improve your experience. We'll assume you're ok with this, but you can opt-out if you wish.Accept Read More
Privacy & Cookies Policy