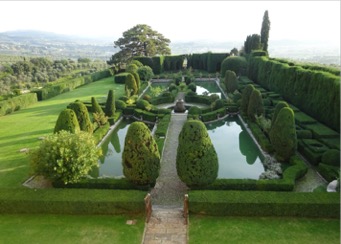 Over four days in October 2019, we visited 15 inspirational gardens in and around Florence. The earliest one we visited, Villa Medici in Fiesole, was built by banker and patron of the arts, Giovanni de’ Medici, son of Cosimo de’ Medici, between 1451 and 1457. It was considered the first example of a Renaissance villa –­ “a villa suburbana” located on the outskirts of cities. Its terraces with their wonderful Tuscan views, parterres enclosed by box and lemon trees in terracotta pots and fountains were to be recurring themes in our tour of Florentine villas. A long pergola led to the giardino segreto with its pond and magnolia trees.

This villa contrasted with Villa di Poggio a Caiano, commissioned by Lorenzo the Magnificent in 1480, and his favourite home. The avenues and vistas have been replaced by serpentine walks through woodland, following the 18 -century craze for the English natural garden.

When Cosimo I de’ Medici, great-grandson of Lorenzo the Magnificent, became Grand Duke of Tuscany in 1537 he employed Niccolò Tribolo to redesign the gardens of his childhood home of Villa Di Castello. He created a sequence of terraces with sculptural fountains. The first terrace has 16 parterres, the second a large citrus garden full of enormous terracotta pots. During our visit, the gardeners were moving them with forklift trucks to the limonaia (a room used for overwintering lemon plants). The grotto containing The Cave of Animals depicts in tufa (a limestone) many animals symbolic of hunting.

These gardens’ symmetry reminded me strongly of the Great Plat, a formal garden at Hestercombe House in Somerset, originally built in the 16th century. The terraces around it were designed by Edwin Lutyens with planting devised by Gertrude Jekyll from 1904 to 1907. The parterres are edged with bergenias – a favourite of Jekyll’s – rather than the box found at Villa Di Castello.

Cosimo went on to create grander schemes, such as the Boboli Gardens behind the Renaissance Pitti Palace in Florence. The gardens boast a huge amphitheatre excavated in the hillside, currently adorned with a bright red modernist sculpture!

We later saw Villa Schifanoia and Villa Salviati, both in Fiesole, with their predominantly green gardens, also a feature of Villa La Pietra bought by Arthur Acton and his American wife, Hortense Mitchell, in 1907. Soon after the couple joined the Florentine community of “culturally passionate expatriates”.

Villa Gamberaia in the hills of Settignano, just three acres in total, consists of a series of “garden rooms”. A 225-m bowling green leads from a spot with a view of the river Arno at one end to a monumental fountain at the other.

Adjacent to this is a parterre garden. Princess Jeanne Ghyka, sister of Queen Natalie of Serbia, bought the villa in 1895 and restored it, filling the parterres with water in 1896. She was rumoured to swim in them at dawn. Box, yew hedging and topiary have replaced her original flowers. Steps from a “rustic cabinet” – a narrow outdoor room with ornate stone walls – leads up to the higher level and the limonaia.

Another highlight of the tour was the legendary Villa I Tatti. In 1908, American art connoisseur Bernard Berenson engaged Geoffrey Scott and Cecil Pinsent to design a garden at his home in the spirit of the Italian Renaissance. Its steps descending the steep slope have beautiful pebble mosaics. The garden is also very green with its many yew and box hedges.

Scott and Pinsent’s next commission was for Charles Strong at Villa Le Balze in Fiesole in 1913. The long house has a narrow terrace, formal gardens and an elaborate grotto.

On our only wet day, we visited the largest private city garden in Europe, Giardino Torregiani, which contrasted with all the other gardens on the tour as it was in the style of an English “romantic park”. Otherwise, we enjoyed fantastic weather – complete with voracious mosquitoes! The tour ended with an enjoyable free day in Florence.

Tracing the History of your House – Learning from our Research into G...