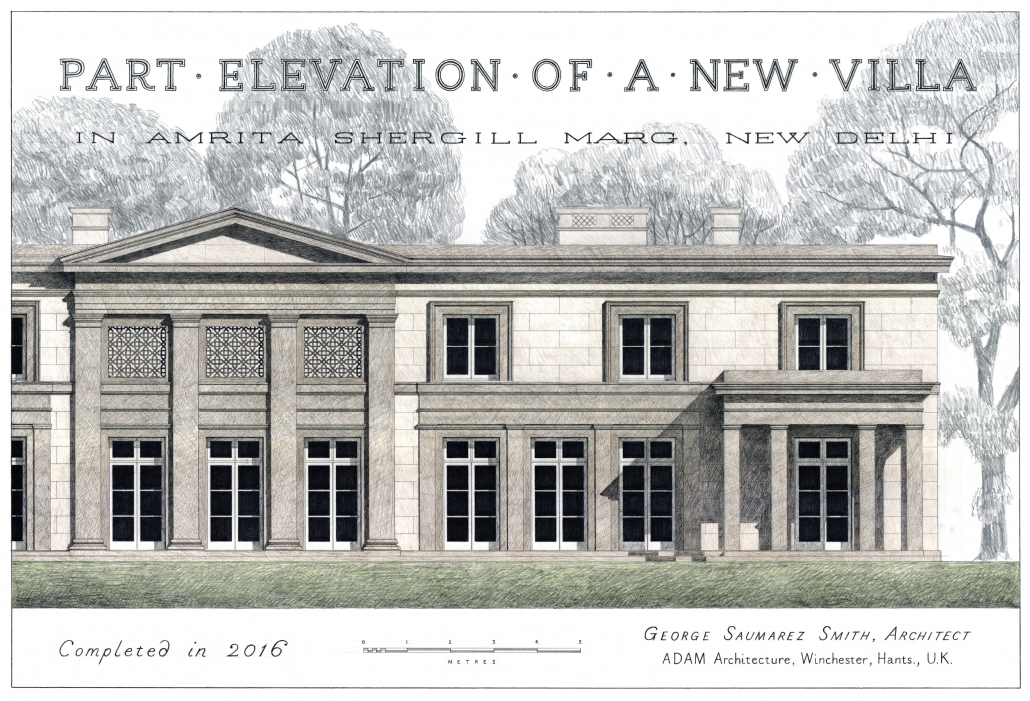 Homewood, designed by Lutyens from 1900 to 1903: The absent tympanum to the arch shows how Lutyens reinvigorated Classical detail. Photo © The Lutyens Trust Photographic Archive

An original Lutyens-designed fireplace and drawing were rediscovered behind panelling during restoration of Berrydown Court carried out by Peter Inksip. Photo © Peter Inskip

Over the course of a month, The Lutyens Trust hosted three lectures at The Art Workers’ Guild in London — the first half of a two-part lecture series that will continue later this year. The three talks explored different facets of Edwin Lutyens’s work locally and abroad, and how this was affected by different social and economic conditions. Each lecture presented an opportunity for the speakers — all architects — to give an insight into how Lutyens influences them and their peers today, with reference to their own projects.

The talks began with a two-part presentation by George Saumarez Smith, a director of ADAM Architecture. He set the scene with reference to the role Lutyens played in the design of New Delhi, then turned his attention to his own work in India. Entitled “Building in New Delhi”, his talk explored the work Lutyens undertook in conjunction with Herbert Baker and other architects. This focused on grand residential architecture, in particular Rashtrapati Bhavan (formerly the Viceroy’s House), and the audience was treated to rare black and white archival photos of its construction. George demonstrated Lutyens’s love of the vernacular and his gradual progression towards Classicism in the early 20th century. Lutyens considered Classical architecture a universal language and it was this, in conjunction with his use of local materials, which resonated with George in his own work many years later. The second part of his lecture shed light on a new house he has designed in a New Delhi that is vastly different from the one Lutyens knew.

The second speaker, Stuart Martin, a long-standing admirer of Lutyens, gave a talk entitled “Designing in the Light of Lutyens”. Stuart demonstrated Lutyens’s impressive knowledge of materials and craftsmanship by examining the finer details of his country houses. The audience was invited to consider his intricate use of materials, such as slate, wood, flagstones and herringbone brickwork in both his vernacular and Classical projects. Stuart concluded by pointing out how Lutyens had significantly influenced his work, which focuses on both conservation and, increasingly, new-builds.

The final lecture, “Conserving Lutyens’s Heritage”, was presented by architect Peter Inskip. He began by stressing the importance of thorough research and preparation prior to undertaking restoration work and by demonstrating how his renovation of Berrydown Court in Hampshire had been a great success due to the initial research conducted by his firm. This allowed them to identify original Lutyens drawings on walls as well as an original fireplace hidden behind the
1920s and 1930s neo-Georgian panelling. Thanks to its detailed research, the practice was also able to identify Lutyens’s intersecting levels and planting in the garden on which he worked with Gertrude Jekyll. Peter also covered the restoration of Castle Drogo, where he is its Project Architect, and concluded by enlightening us about his conservation work on Lutyens’s memorials and cemeteries in France and Belgium for The Commonwealth War Graves Commission.

It was interesting for many of us to be introduced to the wide variety of Lutyens-related topics discussed in these talks, which were informative both for those new to Lutyens’s work as well as for those more familiar with it. They also gave everyone present a greater sense of how his work is influencing architects today.

The second half of this series will look at Lutyens’s work in London and Italy, starting in October. For more details, see page 27. For updates on when these will take place, please visit www.lutyenstrust.org.uk.