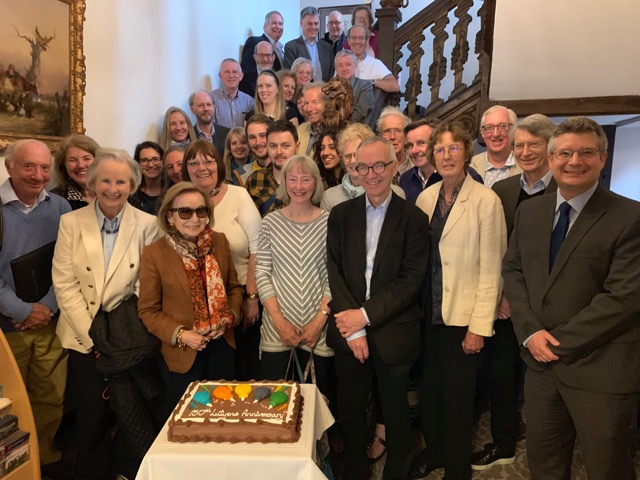 The Trust had asked me to give an illustrated talk on Edwin Lutyens’s use of brickwork, of which New Place is a fine example on a grand scale. New Place, Shedfield, in the New Forest, is a monument of brick architecture with chimneys that sail above the two main gables of the entrance façade, and even window mullions of brick. The bay containing the front door is decorated with projecting brick quoins and rustication in the manner of the Old House in Blandford Forum, Dorset. Lutyens loved brick. In 1903, he had designed Daneshill, on the other side of Hampshire, for Walter Hoare. Like New Place, this takes brick to an extreme, with broad masses of wall that are entirely uninterrupted except for little brick squares, each filled with tiles laid in a different pattern. This motif must have been inspired by the putlock holes that medieval builders left in walls that might later have been used for scaffolding: the holes provided anchoring for posts.

Lutyens, struck by the quality of the bricks he had seen near Daneshill, in Old Basing House, persuaded Hoare to open the Daneshill Brick and Tile Company. In 1905, an office was built to advertise the potential of the product, in terms of bravura bricklaying. Twelve workmen were employed to produce the narrow bricks beloved of the Arts and Crafts movement but previously only available from Holland. One building on which they were used was Marshcourt, with its twisted chimneys. New Place, built in 1906, must have put in an order for many thousands of them. For the Lutyens enthusiast, the interior of New Place is something of a curiosity, much of it having been imported from a 17th-century house in Bristol converted to a tobacco factory. When its owner died in 1884, his widow, Mrs Franklin, Lutyens’s client, inherited the factory and rescued its interiors when it relocated in 1905.

The day was at the invitation of the management of New Place, now a hotel, who gave Trust members a warm welcome, an explanation of the origin of the house, an excellent lunch and a tour of the building.