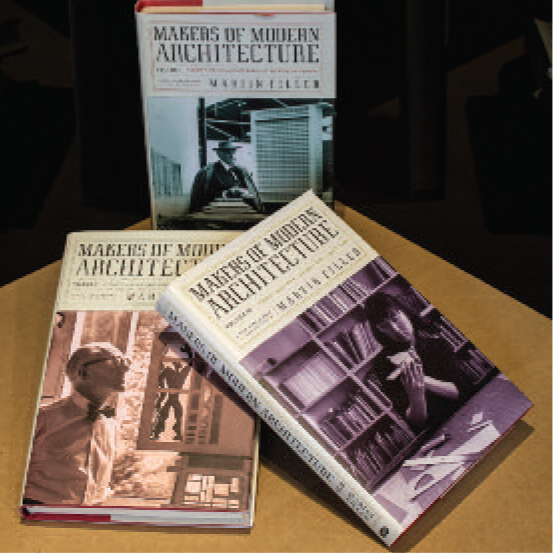 I have been devouring a wonderful trilogy that is a must for every lover of architecture and design. These three volumes by Martin Filler, entitled Makers of Modern Architecture, are individually named “From Frank Lloyd Wright to Frank Gehry”, “From Le Corbusier to Rem Koolhaas” and “From Antoni Gaudí to Maya Lin”. Filler has contributed long essays on artists and architects to The New York Review of Books since the 1980s. These volumes are new re-editions of a book featuring some of these essays originally published by The New York Review of Books in 2007.

Despite the “from and to” in the title, the volumes are less a chronology than a roll call of the greats from roughly the beginning of the 20th century to the present day. They are unusually presented for studies on architecture as each one is the size of an average novel and illustrated with very few photos. A welcome stride away from the overlarge, over-glossy coffee-table book, this format works tremendously well: with each essay being relatively short — between 15 and 25 pages long — the books are perfect for dipping into, and currently sit on my bedside table, allowing me to enjoy daily encounters with an architect or two.

My attention was drawn to Volume III as it contains an essay on Lutyens, who enjoys the company of Gehry, Gaudí and Renzo Piano in the updated version. As with all of the essays, this is beautifully written and, though relatively concise, covers both architectural and biographical detail accurately. He even mentions his furniture and gives my company a mention, which was very kind.

Filler’s conclusion is that while Lutyens was not a modernist, “he was most definitely a modern architect and a very great one at that. While he largely disdained innovative construction methods, he responded to the new needs of the 20th century with a restless imagination, as demonstrated by his up-to-date corporate headquarters, admirable workers’ housing and incomparable memorials to Britain’s victims of unprecedented industrialised combat during World War I”.