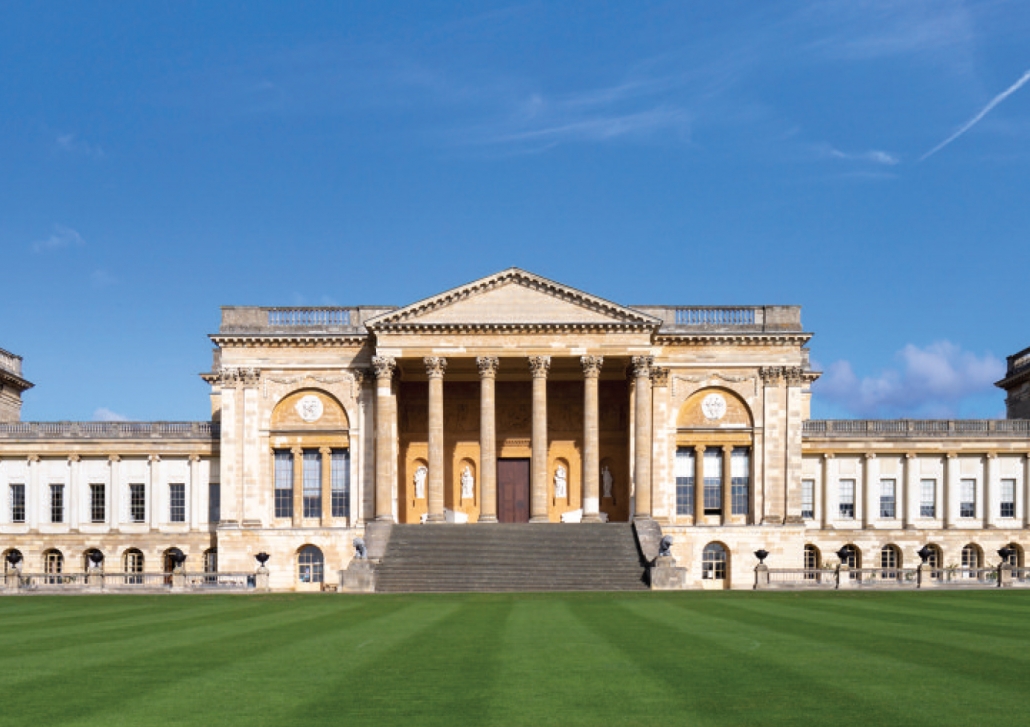 In 1922, Clough Williams-Ellis, architect of Portmeirion and a close friend of Edwin Lutyens, set in train a series of events that would ensure the survival of one of the country’s greatest estate houses. Asked by his father-in-law to write an article “on the place, its past, its present state and its possible future” in The Spectator, Williams-Ellis records his enthusiasm at seeing “exemplified Classical domestic architecture on the grandest scale set in a superbly contrived landscape…” The house was Stowe in Buckinghamshire, ancestral home of the Temple Grenvilles. Following the death of the estate’s heir in the First World War, the building was put on the market in 1922 and was acquired by an organisation seeking to build public schools.

Soon after his article appeared, Williams-Ellis received a call from the man behind this who appointed him the architect for the house’s conversion. Stowe School opened in May, 1923.

Maintaining a building of the size and age of Stowe House requires considerable resources. Neither house nor gardens could be rescued within the modest revenues of a public school. But in 1989, at the instigation of an anonymous benefactor, an agreement was signed to transfer the gardens to the National Trust for their care and restoration. Ten years later, the Stowe House Preservation Trust was created to raise funds for and manage the restoration and oversee the house’s opening to the public.

The Stowe House Preservation Trust has since been working through a six-phase restoration programme, aimed initially at securing the fabric of the building, restoring the external elevations and progressively working through the interior. The great library, the winter entrance, the State Music Room and Blue Drawing Room with its blue silk damask wallhangings have all been restored to their former glory.

In 2002 and 2004, the World Monuments Fund added Stowe House to its “Watch List”, a cautionary listing of buildings around the world deemed to be at risk from neglect, vandalism, armed conflict or natural disaster. A key advocate for that listing and subsequent publicity campaign to “do something” was Colin Amery, President of The Lutyens Trust, architectural historian, conservationist and journalist, who sadly died last year.

The restoration also tackled the North Hall, the mansion’s principal entrance. In 2014, William Kent’s magnificent painted ceiling was restored, removing years of grime from its gold mosaic depiction of Viscount Cobham. Analysis of layers of paint enabled the colour for the early 19th-century period to be matched and a decorative scheme for this was agreed. Research failed to identify the stone used for the hall’s floor but a suitable one was found to replace the inappropriate terrazzo laid in the mid-20th century.

Planning has already started for the next phase of the restoration, the State Drawing Room, State Dining Room and small dining room leading to the former State Bedchamber. These rooms are in use by Stowe School, so the restoration will mostly have to be managed with the school occupying them. All this work will cost a prodigious sum but the Stowe House Preservation Trust believes that, if the work is to show faithfully the appearance of the house and last another 200 years, it will be money well spent.

Prior to his work at Stowe, Colin’s enthusiasm for good architecture had seen him campaign for the preservation of Spitalfields Market, St George’s Church in Bloomsbury and Strawberry Hill House, Horace Walpole’s Gothick mansion in Twickenham. As a lasting tribute to Colin’s passionate advocacy, it was decided to raise funds in his name for this, the last major stage in Stowe’s restoration. Thanks to another, anonymous, donor every pound raised in Colin’s memory will be matched by the same amount towards the restoration of Stowe’s western wing. At a lunch at Stowe in July 2018, attended by His Royal Highness Prince Michael of Kent, who had known Colin well, a plaque was unveiled that will hang at Stowe to commemorate his love of good architecture and, hopefully, inspire the next generation of historians, conservationists and architects.