One of the lesser-known but no less interesting aspects of Edwin Lutyens’s work is the larger schemes he designed of which only a small part was built. We have previously looked at cottages on the Basildon Park estate in Berkshire, where in 1917 Lutyens designed a new village for James Morrison to include a school, almshouses and a substantial church. Only a small farmhouse and a pair of cottages were realised (see Spring 2016 Newsletter). In Eckington, Derbyshire, Lutyens had been courting Sir George and Lady Ida Sitwell for extensive works at Renishaw Hall near Chesterfield in Derbyshire. In the event, he designed the beautiful Italian-style formal garden near the hall (see Winter 2016 Newsletter) and the billiard room (a reworking of the ballroom anteroom) and converted a former coaching inn into a golf-course clubhouse and added a wing to this in the French style. 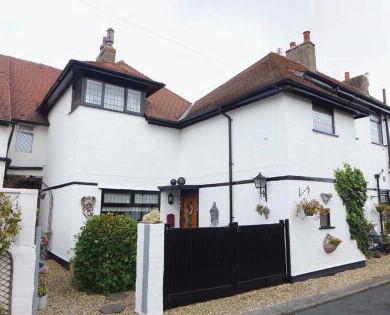 Ivy Cottage, a Lutyens-designed property which formed part of a much larger scheme at Cleveleys, inland from Rossall Beach and north of Blackpool in Lancashire, is under offer with estate agent Susan Eve. In 1898 the opening of a tramroad (light railway) connecting Blackpool to Fleetwood made possible the development of Cleveleys, which rapidly grew into a small town. Local architect and engineer TG Lumb, who had worked on the tramroad, was part of a consortium that acquired 2,000 acres and had visions of creating a new garden city at Rossall Beach. In 1901, Lumb enlisted Lutyens to design it; he drew up plans for what he described as “my new town”, designing a church, central buildings, classical pavilions and several houses. (Drawings for some of these individual designs are in the RIBA Drawings Collection.)

Ultimately, however, the Rossall Beach scheme proved too ambitious and only a small number of houses were built. Of these, Lutyens designed two groups of four cottages, including Ivy Cottage, which face each other across the road at Way Gate. The listing (Grade II) reads “Brick, rendered and whitewashed, with red-tiled hipped and swept roofs, in a free version of Arts & Crafts domestic style. Group of four ranges of buildings of two storeys, joined at their rear corners to form a quadrangle, with central courtyard approached by arches through the north and south ranges, the four dwellings ingeniously disposed with their front doors in the reentrants.” Another cottage, York Cottage, with three bedrooms and two bathrooms, is available through The Square Room. Guide price: £134,000.

No significant houses have come to the market so far this year, although a few remain for sale. Warren Mere, which Lutyens altered and extended in 1896 and again in 1909, is available at £4.5m through Knight Frank. Mulberry House at 36 Smith Square, Westminster, designed for Reginald McKenna in 1911, is available at £17m also through Knight Frank.

White Lodge, Roedean, Brighton, which Lutyens remodelled and extended for Victoria, Lady Sackville in the 1920s, has since been converted into apartments. One of these, a four-bedroom penthouse, is for sale through Brand Vaughan at £595,000. Nearby in Willingdon, Eastbourne, an apartment is available in The Hoo, an enlargement and remodelling of 1902 for Alexander Wedderburn QC in the Neo-Georgian style, which Lutyens considered “a great success – all windows!”. Now Grade I-listed, the two-bedroom, two-reception room apartment is for sale through Strutt & Parker at £315,000. In Rolvenden, Kent a fully refurbished three-bed property within the Grade II*-listed clockhouse entrance to Great Maytham Hall is available through Jackson-Stops at £529,950. In the Hall a two-bed apartment is available for £540,000 through Fine & Country. Great Maytham was designed by Lutyens in his “Wrenaissance” style for HJ Tennant from 1909 to 1912 and the grounds include a walled garden, the inspiration for Frances Hodgson Burnett’s acclaimed book The Secret Garden.