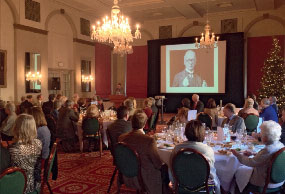 The Christmas lunch took place again at the Bloomsbury Hotel, Great Russell Street, London — originally designed by Edwin Lutyens as the Headquarters of the YWCA.

The 54 members attending the lunch were free to explore the building (sadly no progress had been made on reinstating the swimming pool), then gathered for drinks in the library and chapel before moving to Queen Mary’s Hall.

To mark the centenary of the outbreak of the First World War, the Trust had invited M Alain Petitjean, Directeur Adjoint du Conseil Général de la Somme, and his wife Evelyne as our special guests. In his address — and after reminding us that William the Conqueror had sailed from Saint-Valery-sur-Somme to conquer England — Alain explained the work of the Conseil Général and his own responsibility for roads, harbours, waterways and buildings in the Département.

His role includes working closely with the Commonwealth War Graves Commission, the Government of Australia, The Lutyens Trust (he paid special tribute to Michael Barker, who represents the Trust in France) and others in relation to the infrastructure surrounding many Lutyens cemeteries and memorials, especially those at Thiepval and Villers-Bretonneux (the town where Alain and Evelyne live).

He explained that his Département had negotiated the grant, at national level, of protection from development for 2,500 hectares surrounding Thiepval and was working with 12 other Départements and the Belgian Government to achieve UNESCO World Heritage Site listing for this and other First World War battlefields.

At Villers-Bretonneux, Alain had been responsible for a realignment of the road and creation of a discreetly sited car park, which have minimised the impact of traffic. He also outlined the Australian Government’s “awkward” intention to construct a new Interpretive Centre behind the memorial. (Note: while a visitor centre is a necessary development, The Lutyens Trust considers there is a more logical and less invasive place for it, and has made its view plain.) This site is also intended to be included in the application for World Heritage Site listing.

Alain then explained a French Government proposal to restructure the Régions and Départements in France. This would see the Région Picardie merge with the Région Nord-Pas-de-Calais, with an ensuing impact on the structure, role and budget of the Départements.

He concluded by urging members not to miss Stage Five of the 2015 Tour de France between Arras and Amiens on 8 July, which will pass in front of both Thiepval and Villers-Bretonneux en route!

The lunch continued with Paul Waite’s photographic review of the year’s events and the traditional quiz and raffle draw. As ever, the Trust is very grateful to Michael Neve, General Manager of the Bloomsbury Hotel, and his excellent staff; also to Paul for creating and presenting the slide show; to Ann Ledden and Fred Ledden and Nicola Donati for their fine work selling raffle tickets, and to those who provided prizes for the raffle and quiz.