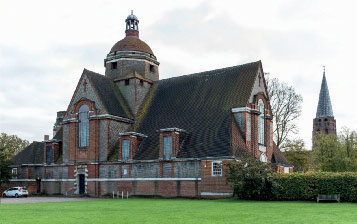 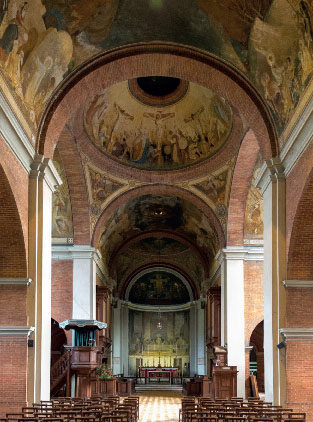 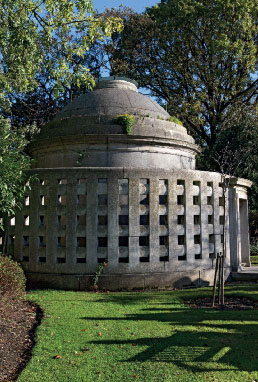 Hampstead Garden Suburb is, or so it seems to me, rather magical. Upon our arrival on the busy Finchley Road, I could not imagine that a short walk down a suburban road would lead me to this Arts and Crafts paradise. yet this is what awaited those members who joined Mervyn Miller and David Davidson on this tour on one fine autumn day.

Nikolaus Pevsner described Hampstead Garden Suburb as “the most nearly perfect example of that English invention and speciality, the garden suburb”. It was the brainchild of Henrietta Barnett (a great social reformer) and her husband Canon Samuel Barnett, and was founded in 1906. The masterplan was drawn up by Raymond Unwin and Barry Parker, and a number of eminent architects, including MH Baillie Scott, Charles Cowles-Voysey and Geoffry Lucas, were brought in to contribute to the varying house designs. Edwin Lutyens joined the group as a consultant and was responsible for St Jude’s Church and its vicarage, the Free Church and its manse, the north-west wing of the Institute and the houses built on the west side of Erskine Hill and in North Square.

Our morning was spent exploring the area surrounding Central Square and Willifield Way. It struck me that, although so many architects had worked to bring the suburb together and each house had its distinctive quality, the place felt seamless. The styles of Unwin, Lucas and Lutyens all fitted together to create a coherent whole. The highlight of the visit was seeing the Free Church and the Church of St Jude on the Hill. Designed by Lutyens, they share the same basic form, yet each has its own characteristics. The Free Church interior is clean-lined, and allows the architectural forms in their purest sense to define the space. By contrast, St Jude’s is packed with murals, stained glass, carvings and furnishings, yet is undeniably by Lutyens. This extraordinary demonstration of Lutyens’s ability to adapt a simple framework to reflect its function was truly an honour for us to see.

After a delightful lunch at The Hampstead Garden Suburb Trust, provided by David, we headed once more into the network of lanes, greens and woods to explore the area surrounding Temple Fortune Lane, the Heath and Golders Green Crematorium. Once again, this mixture of spaces came together and formed what must be a very pleasurable place to live. A special mention must be made of the staff of Golders Green Crematorium, who granted us special access to the Grade II*-listed Philipson Mausoleum (pictured left), designed by Lutyens between 1914 and 1915. This small stone structure is formed of a domed space, surrounded by Ashoka rails (woven stone railings inspired by the Great Stupa at Sanchi, India, which Lutyens used at Rashtrapati Bhavan). The resulting basin-like interior creates an acoustic quality that allows a visitor entering the space to fill it with song, even when singing at the lowest volume.

Throughout the visit, it was obvious that the suburb’s residents took great pride both in their homes and in the immediate environment. The scheme still provides homes, comfort and a sense of community over 100 years later. Thanks must be given to the staff of The Hampstead Garden Suburb Trust for all the hard work they put into conserving the area for future generations and ensuring that the integrity of the original design remains intact. It was a day that I, and I am sure the rest of the members, thoroughly enjoyed.

Tour of the North of France and Flanders