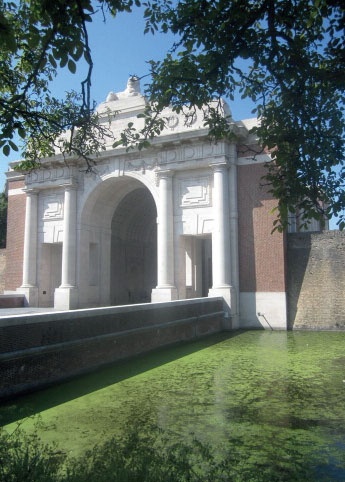 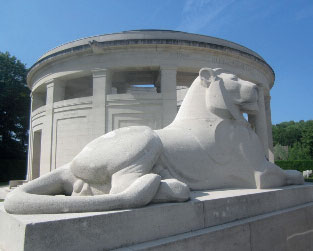 Tour of the North of France and Flanders

From Calais, in our comfortable minibus, we followed the spectacular coast road to Boulogne-sur-Mer with a glimpse of its ancient chateau before our first stop at Lutyens’s enormous Etaples Military Cemetery with its magnificent memorial. Then a stop at the picturesque small town of Rue for lunch in a jolly brasserie (particularly appreciated by those with early Eurostar starts) and visited its exuberant Flamboyant Gothic chapel, its turreted medieval belfry, its late neoclassical parish church and a rewarding small museum devoted to aviation pioneers, the Caudron brothers.

We continued to the small Chinese Cemetery at Noyelles-sur-Mer by Lutyens with a neo-Chinese gateway by JR Truelove. After a brief stop in Abbeville to visit its fine church of St Vulfram, much admired by William Morris and Edward Burne-Jones, we followed a pretty rural route along the Somme valley to Amiens for a two night stay. We visited its outstanding cathedral, after which we took a walking tour of the city centre, had cocktails in a building of 1893 by a pupil of Eugène Violletle-Duc and finally enjoyed a good bistro dinner.

The sun shone the next day as we visited a series of Lutyens’s cemeteries: Daours, one of the earliest, with Gertrude Jekyll planting, then the remote La Neuville with austere pavilions — Lut at his most elemental. We all noted the beautiful planting of trees, a feature of all the cemeteries. The highlight of the morning was the Australian National Memorial and Cemetery at Villers-Bretonneux, inaugurated as late as 1938. Standing
high up with wide views over Picardy, its entrance pavilions are among Lut’s finest cemetery works. Its tall, quite modernist tower was climbed by the intrepid.

We passed through the old town of Corbie whose abbey survived the battles which raged all around during the Great War to visit Corbie Communal Cemetery Extension, which owed much to Charles Holden. Our journey glimpsed the aerodrome of Méaulte founded in 1912 by aviation pioneer Henri Potez where the Airbus is now assembled, the 1920s demesne in the village built by Potez and the town of Albert, largely destroyed from 1915 to 1918 with its church of Notre-Dame de Brebières of 1884, rebuilt identically post-Great War, its gilded Virgin now shining in the sun. Then
we caught a glimpse of Ovillers cemetery on the slopes by Herbert Baker, after which we saw Pozières Memorial to the Missing and Cemetery by WH Cowlishaw to compare and contrast it with Thiepval.

At the Auberge de la Vallée d’Ancre at Authuille we enjoyed a gastronomic lunch before the main event of the day, first visiting the Thiepval Visitor Centre with its graphic displays of Lutyens’s career, Civic Memory, Remembrance and Reconstruction, and a temporary exhibition devoted to the inauguration of the memorial in 1932. This prepared us for Lutyens’s tremendous nearby Thiepval Memorial to the Missing, the largest British memorial in the world. Our day ended with Serre Road No 2, the second largest cemetery by Lutyens after Etaples. We also saw the nearby Serre Road No 1 by Noel Rew and a nearby French Military Cemetery to compare. After a glimpse of the portal of the church of Mailly-Mallet with its
marvellous Flamboyant Gothic sculpture, we returned to Amiens.

On another sunny day, we went first to Longueval with its South African National Memorial by Herbert Baker in Delville Wood (nicknamed Devil’s Wood). It now includes a museum built in the 1980s which was interesting enough. Passing through Flers — and catching a glimpse of Albert Toft’s bronze memorial to a soldier — we arrived at Warlencourt, one of the first cemeteries built by Lutyens, then at his Grévillers Cemetery with its New Zealand Memorial to the Missing. Next was Lutyens’s Croisilles Cemetery with its fine pavilion and mastery of a complex site. A
trip to Vis-en-Artois gave us the opportunity to visit JR Truelove’s excellent Memorial to the Missing with fine sculptures by Ernest Gillick.

After two more notable cemeteries by Lutyens at Monchy-le-Preux (including glimpses of Lady Feodora Gleichen’s fine bronze 37th Division Memorial and the bold bronze caribou of the Newfoundland Memorial) and Brown’s Copse Cemetery, we landed in the historic Flemish city of Arras, and lunched in one of its two magnificent squares.

On the outskirts of the city we visited the cloisters of Lutyens’s serene Faubourg d’Amiens Memorial to the Missing and Cemetery with its Royal Flying Corps Memorial by the sculptor Sir William Reid Dick. We moved on to the astonishing Canadian National Memorial on Vimy Ridge sited on the heights of Artois with wide views over the former coalfields. Conceived, it seemed, in a dream by its architect sculptor Walter Allward, it is a are blend of Expressionist architecture and sculpture.

Our day ended in the vibrant city of Lille, capital of French Flanders. After a short walking tour of the city centre we were treated to a gastronomic dinner at the restaurant Monsieur Jean.

On Saturday, we entered Belgium to visit the immense Tyne Cot Cemetery by Herbert Baker, mainly made using flint. Its modern Visitor Centre presented a moving introduction to the tragedy of the battles in the Ypres Salient. At Zonnebeke we visited the excellent church of 1925 by Huib Hoste, the first modernist church in Belgium. At Zillebeke we visited Lutyens’s Sanctuary Wood Cemetery, on a segmental plan. Then we entered the city of Ypres, which was almost blasted into oblivion by German bombardment. Reginald Blomfield’s superb Menin Gate was our introduction to a city bravely rebuilt in authentic facsimile as an act of faith — the cathedral an astonishing achievement. Blomfield’s church of St George of 1929 is a monument to memorialise the many fallen. In Ypres, we also saw the Belgian War Memorial by city architect Jules Coomans who rebuilt the Cloth Hall which now houses the impressive In Flanders Fields Museum. And so to our final stop: Chalton Bradshaw’s Ploegsteert Memorial — nicknamed Plugstreet by the Tommies — guarded by two splendid lions sculpted by Gilbert Ledward.