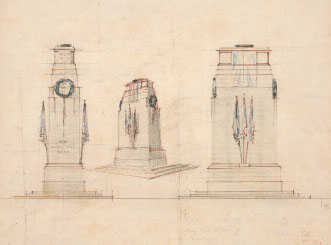 Three perspectives by Lutyens of The Cenotaph, of 1919. Courtesy of Imperial War Museums 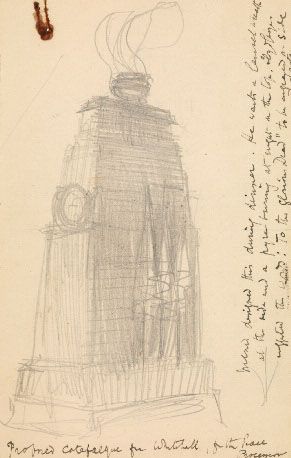 Another Lutyens sketch of The Cenotaph, with annotations by Lady Sackville. Courtesy of Imperial War Museums

For the first time ever, Imperial War Museums (IWM) will be touring a new exhibition — The WW1 Centenary Exhibition — around the world to mark the centenary of the First World War. Its world premiere will take place at the Melbourne Museum in Australia on 17 April, 2015, ahead of the centenary of the Gallipoli landings and ANZAC Day.

The IWM was founded in 1917 during the war to collect and record the stories of the millions across Britain and its former empire who lived, served and died. As the world marks this landmark conflict 100 years on, the show will comprise over 350 items from its internationally renowned collections to enable people across the globe to discover more about this war that changed the world.

Drawn broadly from the narrative of IWM London’s new First World War Galleries, the exhibition will tell the overall story of the war: how it started, how it was fought, what it was like for people at the time and its impact on their lives. Facsimiles of Edwin Lutyens’s drawings for the Cenotaph in London and a model of the original structure will feature in a section on the war’s legacy. Most of Britain’s war dead were buried overseas and the Cenotaph or “empty tomb” became, and remains, the focus for national remembrance. It was first made in wood and plaster for Victory Day in July 1919. Later, a permanent stone structure was unveiled by King George V on Armistice Day 1920. The show will also display objects — ranging from artillery shells and guns, military uniforms and work clothes worn by munitionettes to personal diaries, letters and artefacts — and art from IWM’s collection, including paintings by William Orpen, Christopher RW Nevinson, Paul Nash and others. In addition, the exhibition will incorporate state-of-the-art interactive and immersive spaces telling stories illuminating the experience of war.

Diane Lees, Director-General of IWM, says, “The First World War has come to the forefront in the last year. It cost over 16 million lives and affected the lives of many, many more. IWM’s collections bear witness to the ordinary and extraordinary stories of those affected by the war, and it is an honour to be able to share them with visitors across the world in this new exhibition.”

A book — The WW1 Centenary Exhibition, compiled by Samantha Heywood and Nigel Steel, due to be published on April 17 by IWM — will accompany the show, and will be available from the IWM shop and website (www.iwmshop.org.uk).