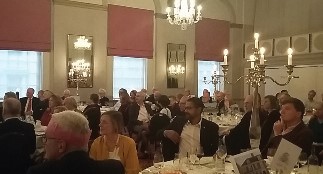 Another year has gone by and we found ourselves once again at the annual Trust Christmas lunch at the Bloomsbury Hotel, Great Russell Street, London, originally designed by Lutyens as the  headquarters building of the YWCA. Previous attendees have come to expect an afternoon of fine dining, great service and fun with friends old and new. This year didn’t disappoint, and the Queen Mary Hall was filled with a record number of attendees – 80!

Members were also able to look round the main rooms on the ground and lower-ground floors and new terrace restaurant, which have been refurbished by Martin Brudnizki and are well worth a visit.

A delicious meal of gin-cured gravadlax, roast turkey and lemon tart was followed by a highly interesting talk by Bryher Mason, the House & Collections Manager for Castle Drogo, on the “Saving Castle Drogo” project.

She summarised the gargantuan efforts made to construct the castle in the early 20th century, matched by the efforts of its team of restorers today. Bryher treated us to previously unseen photographs of the castle under construction, along with witty sketches by Lutyens.

After lunch, the various tables pitted themselves against each other for the traditional pictorial quiz to recognise Lutyens buildings. Plied with coffee and mince pies, we were treated to a review of the past year’s events and a raffle whose prizes included a pair of exquisite Lutyens-inspired salt and pepper mills (courtesy of Candia Lutyens) and a pre-publication copy of David Cole’s book Sir Edwin Lutyens: The Arts and Crafts Houses (courtesy of Michael Edwards). The lunch, much enjoyed by everyone, raised over £170 through the raffle.

As ever, we are grateful to Michael Neve, General Manager, for enabling us to hold this event at The Bloomsbury and to his efficient and friendly staff.