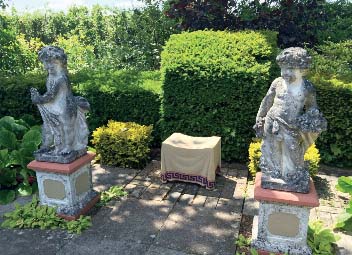 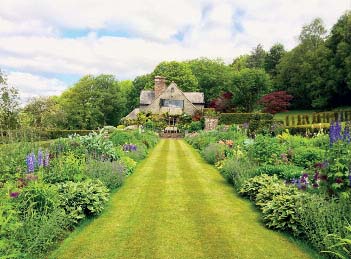 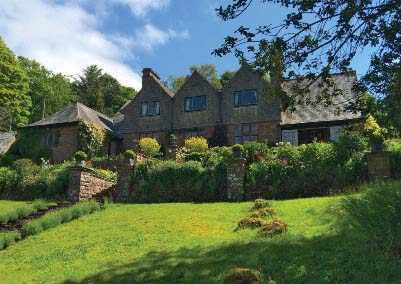 Although we visited Laskett Gardens after High Glanau, I have written about the former first as High Glanau turned out to be an even greater success. Due to a small take-up from members, there were only 10 of us. But this meant we had both gardens completely to ourselves — a rare treat. Laskett, in Herefordshire, is not a plantsman’s garden but a formal, architectural garden with a geometric structure — all angles, vistas, statuary and buildings. Its main feature is its topiary. All the avenues and garden spaces comprise yew and native hedges and trees clipped into orbs, dials and geometric shapes. Apart from some garden rooms, the overriding colour is green. Colour is confined to the rose garden, Silver Jubilee Garden and V&A Walk. I didn’t have many preconceptions of the garden but I imagined it to be fairly ornate, Italianate and to have one or two urns and statues. What I could not have imagined is how many urns and statues there turned out to be. Set over four acres, the garden was designed, built and planted by historian Sir roy Strong and his late wife, the designer Dr Julia Trevelyan Oman, over the course of nearly 40 years. However, since Julia’s death in 2003, the gardens have been apparently pruned and thinned out and some larger trees removed.

This is a very personal garden, conceived and planted by two very artistic people over a lifetime. It incorporates many objects with personal value but I couldn’t help feeling sometimes that it is not enough to create a garden without a real understanding of how garden design and planting need to fit together. It had many beautiful, interesting elements, but, for me, it was a case of less would definitely have been more.

High Glanau Manor, in Monmouthshire, was commissioned by Henry Avray Tipping (1855-1933), a wealthy architectural historian and garden designer. As Architectural editor of Country Life for 17 years, he made the magazine essential reading for anyone interested in Britain’s great country houses, their furnishings and gardens. Tipping restored Mathern Palace, a former bishop’s palace for himself and his mother, then built Mounton House, one of the last important country houses, where he entertained the great and the good of the Edwardian era. After the First World War, he commissioned his ideal “cottage”, High Glanau, built in the Arts and Crafts style from 1922 to 1923 by the architect Eric Francis. It became his country residence in his later life. Tipping, who had no family of his own, was central to the lives and work of such distinguished garden designers as William robinson, Gertrude Jekyll and Harold Peto. But he was also a garden designer, notably for Chequers and Dartington Hall. So, in his own properties, the garden always took precedence over the house.

Wonderfully restored by the current family living here and the subject of a recent book by them, High Glanau’s original features include impressive stone terraces with expansive views over the mountainous terrain of the Vale of Usk, Blorenge, The Skirrid, The Sugar Loaf and the Brecon Beacons. The garden also includes a pergola, an edwardian glasshouse, herbaceous borders, rhododendrons, azaleas, tulips, an orchard with wild flowers and woodland walks. We later took a tour of the house, which included a bed designed by Scottish architect Robert Lorimer and beautiful panelled interiors.