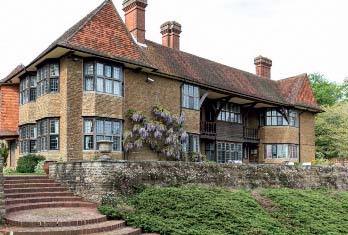 A last-minute opportunity arose to visit Fulbrook House and its garden and, despite this short notice, double the number of people who could be given access applied for tickets. However, the owners were kind enough to admit everyone and so two separate groups visited on the same day. This was extraordinarily generous, as the owners had also agreed that all proceeds from the visit should go to The Lutyens Trust: a welcome boost for our fundraising efforts. Gavin Chappell masterminded the comings-and-goings of the two groups with military precision and his usual charm, car-pooling members from a local pub in convoys since so many wanted to see the house and gardens.

Fulbrook was built in 1896-9 by Lutyens for Gerald Streatfield. It was extended to the north in the 1970s by Roderick Gradidge, who added an internal swimming pool building in the traditional style (which was altered in the 80s). The original house has an Arts and Crafts exterior and Lutyens’s first classical interior with Ionic order piers and columns found in the Great Hall and staircase bay. The grounds were laid out by Mrs Streatfield and Gertrude Jekyll, and are now lovingly maintained by the current owners.

Although rain had been widely predicted, the sun shone and the gardens looked magnificent. The owners showed the groups both the house and garden and, as one member said, “I can’t remember ever having met more welcoming and charming hosts. It was a wonderful day”.