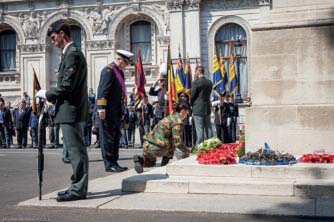 The Annual Belgian Parade at the Cenotaph, A Unique Honour

Eighty years ago, Belgium’s King Albert I died as a result of a climbing accident. Touched by the death of his nephew and, in recognition of the heroism and sacrifice of the Belgian Army in the First World War, King George V decided to bestow a unique honour on the Belgians never awarded to any other non-Commonwealth nation: a yearly Belgian Parade at Lutyens’s Cenotaph, the monument for the dead on Whitehall built from 1919 to 1920 at the request of the then prime minister David Lloyd George. Belgium is the only nation that is allowed to parade its troops in uniform and bearing arms in central London.

The parade took place this year on Saturday, July 11. The previous year, HRH Prince Laurent, representing the Belgian King, laid a wreath at the Cenotaph. The ceremony was also attended by the Belgian Defence Minister and UK Vice-Minister of Defence, various British and Belgian civil and military authorities and veterans as well as groups from military education establishments. This was followed by a military parade at Horse Guards Parade and a reception given by the Belgian Ministry for Defence at Wellington Barracks. Guests were also invited to lunch by Guy Trouveroy, Belgian ambassador to the UK, at his residence.

The Belgian Parade in London has taken place annually since 1934 on the Saturday preceding Belgian National Day. It is a strong symbol of the fraternity between the British and Belgian soldiers during and after both world wars, and confirms the close ties that unite both countries.