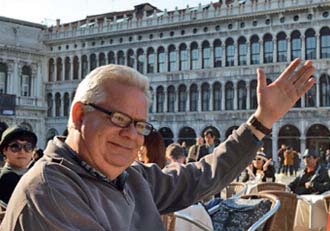 Paul Peterson was born, the third of five children, in New Jersey to a Danish mother and Swedish-American father. The latter worked for a succession of American multinationals abroad and, with his family, Paul left the US aged two and never returned to live there. His childhood was spent largely between Stockholm and Copenhagen.

When Paul was 13, his father was posted to Tehran, and it was decided that Paul would be better off in an English boarding school. So it was that he came to Surrey to spend the remainder of his childhood at Pierrepont School, which is less remembered for its academic prowess than for being housed in a Norman Shaw-designed building. Paul always claimed that his time at Pierrepont and in the Surrey countryside (a familiar story?) nurtured his interest in english vernacular architecture and that it was a natural progression for him to go on to study architecture. He trained at Kingston Polytechnic and graduated second in his year.

As an American — he only became British later — he was obliged to support himself while still a student and did so by working as a contract draughtsman. He established a reputation as a reliable and talented “pen for hire” and was never out of work. Once qualified, he realised that he didn’t want to be part of a firm in a conventional sense; instead he would be hired to troubleshoot where needed, then move on. This pattern suited him and he resisted all efforts by those he worked for to bring him into the fold. As a result, he built little of his own but, when working with Richard Seifert, was asked to become job architect for London City Airport. This experience dulled any enthusiasm he had for the practice of architecture, enthusiasm that was terminally wounded by the advent of CAD, something he detested and — wrongly — felt was doomed. His refusal to embrace new technology was reflected in later life as he never owned a mobile phone or email address.

Paul and I met while he was still at Kingston. He was already — unfashionably — a great lover of Lutyens and took pride in introducing me to his tutors. From them and from him, I learned more about my heritage than I ever had before.

It was when we bought our first home together that we decided we needed a pair of Napoleon chairs and thus began the journey towards our production and marketing of Lutyens’s furniture and lighting designs. Mary Lutyens allowed us to copy her own chair and, with her cooperation and support, we gradually learned about and discovered other designs and started the business. Paul was the driving force in the early days. He developed a very close relationship with Mary and they often spoke weekly on different aspects of what we were doing as she always took a keen interest. It is certainly true to say that, without Paul’s efforts, the fact that Lutyens was a very great furniture designer would not be as widely known as it is today. Indeed, it is also true that many admirers of Lutyens’s architecture — particularly from abroad — have come to his work through his furniture rather than vice versa.

In latter years, as our business became more dominated by use of the internet, Paul took more of a back seat but was always there watching what I was doing, keeping a close eye on quality and detail and backing me up with his encyclopaedic knowledge of all things Lutyens.

Paul died suddenly on 8 February and is sorely missed by our two children and me. Lutyens’s legacy has lost one of its greatest supporters of all time.