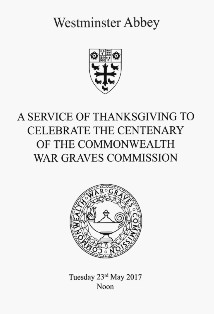 Cover of the Order of Service

“With the growth of the war, the Commission’s work naturally covered every part of the world where men of the Empire had served and died — from the vast and known cities of our dead in France and Flanders to hidden and outlying battlegrounds of a few score at the ends of the earth. These resting places are situated on every conceivable site — on bare hills flayed by years of battle, in orchards and meadows, beside populous towns or little villages, in jungle glades, at coast ports, in faraway islands, among desert sands and desolate ravines.”

From The Graves of the Fallen
by Rudyard Kipling (1919)

A service of thanksgiving to celebrate the centenary of the founding of the Commonwealth War Graves Commission (CWGC) took place at Westminster Abbey on 23 May, 2017. The service was conducted by The Very Reverend Dr John Hall, Dean of Westminster, in the presence of HRH The Duke of Kent. The packed congregation represented the governments and armed forces of the nations involved in the two World Wars and others connected with the origins and work of the CWGC, formerly named the Imperial War Graves Commission and founded in 1917.

The music and singing were provided by the Westminster Abbey Special Service Choir; the Sub-Organist Daniel Cook; the Band of the Scots Guards, and the Countess of Wessex’s String Orchestra.

After testimonies by representatives of the CWGC in India and South Africa, there were readings by Defence Secretary Sir Michael Fallon and Vice Admiral Sir Timothy Laurence, respectively Chairman and Vice-Chairman of the CWGC. The address was given by HE The Honourable Alexander Downer, Australian High Commissioner to the UK, who spoke movingly about the CWGC and the sacrifices made by those whose work it commemorates, as well as about the influence of Edwin Lutyens on the origins of the CWGC and the conception and design of the graveyards and memorials in its care.

Towards the end of the service, Ngāti Rānana London Māori Club gave a haunting rendition of a hymn, which had been sung by the men of the 28th (Māori) Battalion before the Battle of Chunuk Bair, Gallipoli and at the battle’s end.

The service was magnificent and did full justice to the CWGC and its fine work. I felt fortunate to be connected with the Commission through Edwin Lutyens and honoured to have been invited there to represent The Lutyens Trust and its members.

Lutyens and Lytton Families Reunited for a Lunch at The Ned, former Midland... Scroll to top
This website uses cookies to improve your experience. We'll assume you're ok with this, but you can opt-out if you wish.Accept Read More
Privacy & Cookies Policy