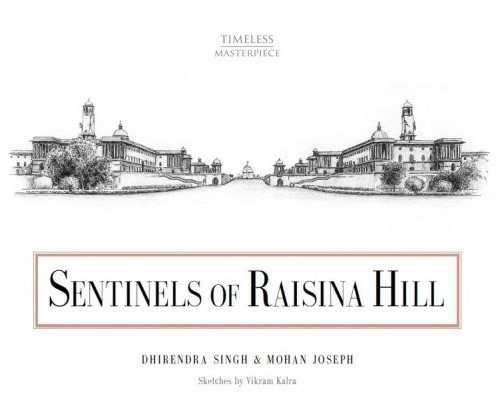 The ‘Sentinels of Raisina Hill’ are of course the Secretariat blocks designed by Herbert Baker, which stand guard alongside the controversial ramped approach to the Viceroy’s House by Edwin Lutyens, the very heart of New Delhi, and since Independence known as Rashtrapati Bhavan, residence of the President of the Republic of India. However, the authors cast their net far wider, beginning with the unpopularity of the partition of Bengal, six years earlier. The account of this momentous event is rich in detail, but as elsewhere in the book precise sources are not cited (nor is the book indexed). This is a pity, as we need authoritative accounts of the origins of New Delhi, and its expression in urban planning, architectural and social terms from an Indian perspective.

The second part of the book contains a fascinating account of the emergence of the Indian Civil Service, which burgeoned after the disbanding of the East India Company, which had been granted its Charter by Queen Elizabeth I in 1600. However, this is peripheral to the stated theme of the book, and a third of its length has elapsed before ‘The Hill at Raisina’ brings us back to the account of the post-Durbar haste to get things moving. This takes an unfamiliar perspective in which the Viceroy, Charles (later Viscount) Hardinge took a more pro-active role in determining the composition of the Delhi Town Planning Commission and the choice of the southern, Raisina site for the new Imperial Capital. The first task was to bring the land into direct government control, and out of the hands of states which might have proved obstructive. This followed the model of the Federal District of Columbia for the development of Washington, and was being adopted for the construction of the new Australian Capital at Canberra, which was contemporary with New Delhi. The choice of Lutyens to serve on the Planning Commission does not possess the sense of inevitability as in Hussey’s classic account in the ‘Memorial’ biography (an omission from the authors’ bibliography).

Hardinge, with whom Lutyens had an uneasy relationship is seen, not as holding out for the ‘northern site’ on The Ridge, but as favouring the ‘Malcha’ site south-west of Old Delhi, for which Henry Vaughan Lanchester provided the layout (this is chronicled in detail in Robert Grant Irving’s classic Indian Summer, New Haven, Yale 1980, which is impeccably sourced and has not been superseded), and then choosing the site of Raisina Hill and turning the axis of the processional way (Kingsway/Rajpath) towards the Purina Quila and the Jumna. The architects are shown as vacillating – the civil servants are said to have drafted the reports, which were sent to Hardinge at Simla to sign off. The well-known criticism of Indian architecture by Lutyens in what were originally private letters to his wife, Lady Emily are aired, and Baker is given a far more sympathetic coverage for his public statements on the virtue of including Indian detail (which he had set out in his well known 3 October 1912 letter to The Times, his pitch for inclusion in the Delhi team – and proudly reprinted in his memoir ‘Architecture and Personalities’ (London, Country Life, 1944)). The authors state that ‘differing from Lutyens’s adamant insistence of European classicism, Baker considered it inappropriate to adopt, unaltered, the English classical style’. This does less than justice to both architects. Lutyens certainly did not impose western classicism in an arbitrary manner, but subtly integrated Indian forms and detail such as the chujja cornice and chattri pavilions, which are precisely the elements that the authors commend Baker for using. And Lutyens’s ‘Delhi order’ with its temple bells is more subtle than the animal heads included in Baker’s ‘Indian Corinthian’ order.

The ‘Bakerloo’ defeat due to the steep angle of the ramp up to the Raisina acropolis gets another airing, of course. Without wishing to take sides in a dispute that has run its course over the best part of a century, I consider that the Secretariat buildings are not only great architecture in themselves, but also form a worthy setting for Rashtrapati Bhavan, in terms of building form, urban space and, particularly, silhouette. It was Robert Byron, writing for the Architectural Review in 1931, who first described the counterpoint of domes and campaniles, which framed the great dome and Jaipur column, centre stage. Standing in Vijay Chowk (the Great Place of the Imperial plan) at sunset, one of the world’s greatest city-scapes is seen in elemental glory. The authors’ account of the architecture of the Secretariats misses the magic of such transports of delight, and does not analyse the architecture in a manner which does justice to Baker’s achievement. Strangest of all is an ‘autobiography’ of the buildings themselves, which again seeks to uplift what is described as Baker’s vision of ‘not only the stones of empire, but also the fibre of a nation’ contrasted (using a quote from Baker) with Lutyens who ‘concentrated his vast talents on the abstract and geometrical qualities to the disregard of human and national sentiment’. The illustrations do not help the authors’ case either, as they consist mainly of sketches by Vikram Kalra, which coarsen the form and detail of the buildings.

This is a worthy book, but unfortunately it presents neither a powerfully argued and supported case for its objective at redressing the recent neglect of Baker’s achievements, nor does it convincingly present the buildings themselves.

A Glimpse of Empire