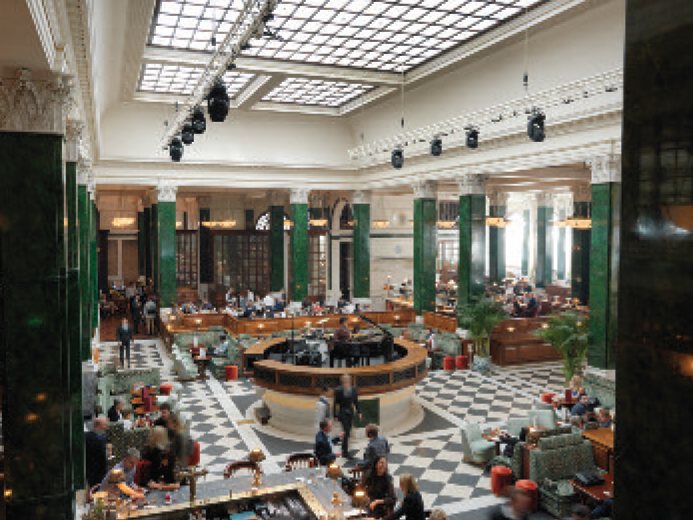 The former banking hall at Midland Bank’s HQ at No 27 Poultry, London, now occupied by restaurants at The Ned. Courtesy The Ned

Architect of the Year Award 2019. The refurbishment of this Grade I-listed Edwin Lutyens-designed building was a joint venture between developer The Sydell Group and Soho House. RIBA notes that the extensive repurposing of the building’s interior has been sensitively undertaken by EPR Architects.

This is all the more commendable given the complexity of the transformation: 13 restaurants and bars now occupy the ground-floor banking hall, while the former plant rooms in the basement were removed to provide a spa, swimming pool and library. The original safe-deposit boxes and vaults are now a cocktail bar. A roof terrace and outdoor pool have also been added. The bank’s former boardroom on the fifth floor is now an events space called the Tapestry Room whose walls are lined with original tapestries.

A statement announcing the awards on RIBA’s website includes the following comments: “This is an extremely successful reuse of a complex site, carried out sensitively while retaining the character of the original Lutyens design. Extensive research and analysis have been undertaken, as well as fine-tuning of various possibilities and options in order to find the right solution. The close relationship with Historic England, Soho House, several stakeholders and consultants through all stages of the project has been rewarded. Structural interventions where needed as well as introduction of extensive new services were carried out in an extraordinarily unobtrusive manner. Exceptional attention to detail ensured the building seamlessly settles into its new role…

“The 250 hotel bedrooms are as you would expect of a 5-star hotel but it is the inventive reuse of the basement banking vaults, the 5th-floor former senior management meeting/dining rooms and the rooftop which impress the most. A high percentage of the original materials have been either retained in place or reused elsewhere in the building.

“The project… breathes new life into a very important building as well as its surrounding area. Completed within an 18-24 month period on site (handed over in phases) it is testament to the team that there are no signs of compromise given the speed of construction.”

The Lutyens Trust congratulates The Sydell Group and Soho House on these prestigious RIBA awards, which this ingenious and successful conversion richly deserves.