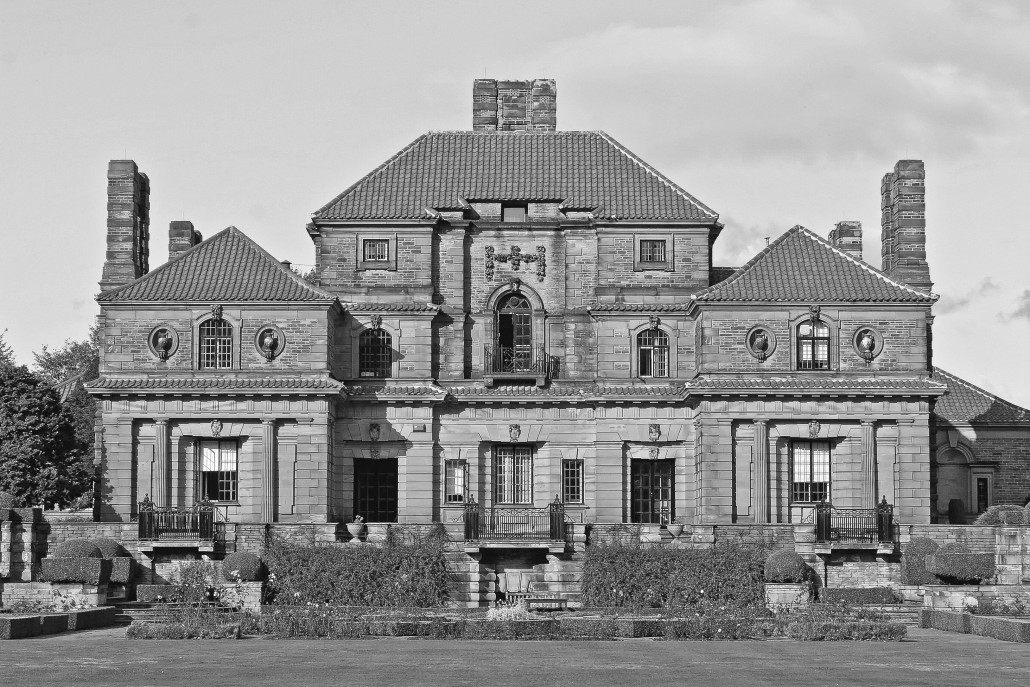 Heathcote, Ilkley (1906-09) is one of Lutyens’s best-known houses. After being occupied for 50 years by N G Bailey as their company offices, it is now for sale. Its architectural pomp and circumstance obscures the fact that it was built as a family home. Sue Birch, who now lives in Ashwell, Hertfordshire, is a granddaughter of Tom Walker, the general factotum of the original owner (and client) John Thomas Hemingway, and has special memories of the house.

“Heathcote” was probably one of the first words I learned to say. My mother and her two brothers were born in “Heathcote Cottage”, Kings Road, Ilkley in West Yorkshire. Their parents, Tom Walker and Edith Alice, were there from when it was first built and for most of their 50 years together and we lived just down the road and spent much of our childhood there.

My grandfather, Tom Walker, was responsible for the smooth functioning of Heathcote, the house itself.

He doubled up as the chauffeur and the cars were in his charge as well. He worked for the first owner, Mr. Hemingway, from the time when the house was being conceived. I should love to know if Tom needed to referee discussions his boss had with Edwin Lutyens. Yorkshire men usually know what they want, even if they don’t always achieve it – but then, I dare say, Lutyens knew too and certainly achieved it!

I suppose my earliest memories of Heathcote began in the 1940s. The cottage, along with the gardener’s, was discreetly hidden. To reach the large garage, where my grandfather had an anvil and a forge, we had to pass through impressively high iron gates and past large sunken, heated greenhouses (pure Beatrix Potter/Mr. McGregor). Behind the sideways sliding doors, which opened the front of the garage, were the Bentley, the Daimler and I think a Sunbeam Talbot convertible. The home was originally lit and served by its own generator. I remember thinking how important my granddad was looking after the biggest house in Ilkley.

The Waddilove family came to Heathcote after the Hemingways and I became best friends with Diddy, granddaughter of the family, as she grew up there. We had the freedom of the garden which included the “Other Side” as it was known, because that side of the garden was across Grove Road – an estate was built there later on.

I have idyllic and wonderful memories – swanning down the black marble staircase and through into the entrance hall with its scary suits of armour. We played endless games of dressing up in long nighties and high heels, and heavenly games of hide-and-seek outside. We sat on the life-size ornamental lions in the garden (later stolen) then the loo, which was up some steps on a platform, was our throne, the round greenhouse was our roundabout. We could always pester Erna, the German cook, in the huge kitchen and I, rather like Cinderella, having to be gone by 5.10 pm when Mr. Waddilove was back home, then tiptoeing down the back stairs past the dining room door, if I had left a bit late.

Despite the scary bits of my memories, Heathcote is still my idea of heaven, partly because it felt like another world. The house shone, was brightly coloured, especially on wet, grey days and was nothing like the typical solid, grey, stone houses with slate or tiled blue/grey roofs which are typical of the town and of Yorkshire in general. And you only have to look at the chimneys to know how special it is. It is a fabulous place and I have loved it always.

Note: Three volunteers from the Photographic and Archive Committee spent a total of eight man days in July at Heathcote, making a photographic record of the house for the Lutyens Trust Archive. This rare opportunity was made possible by kind permission of the owners, N G Bailey Group.