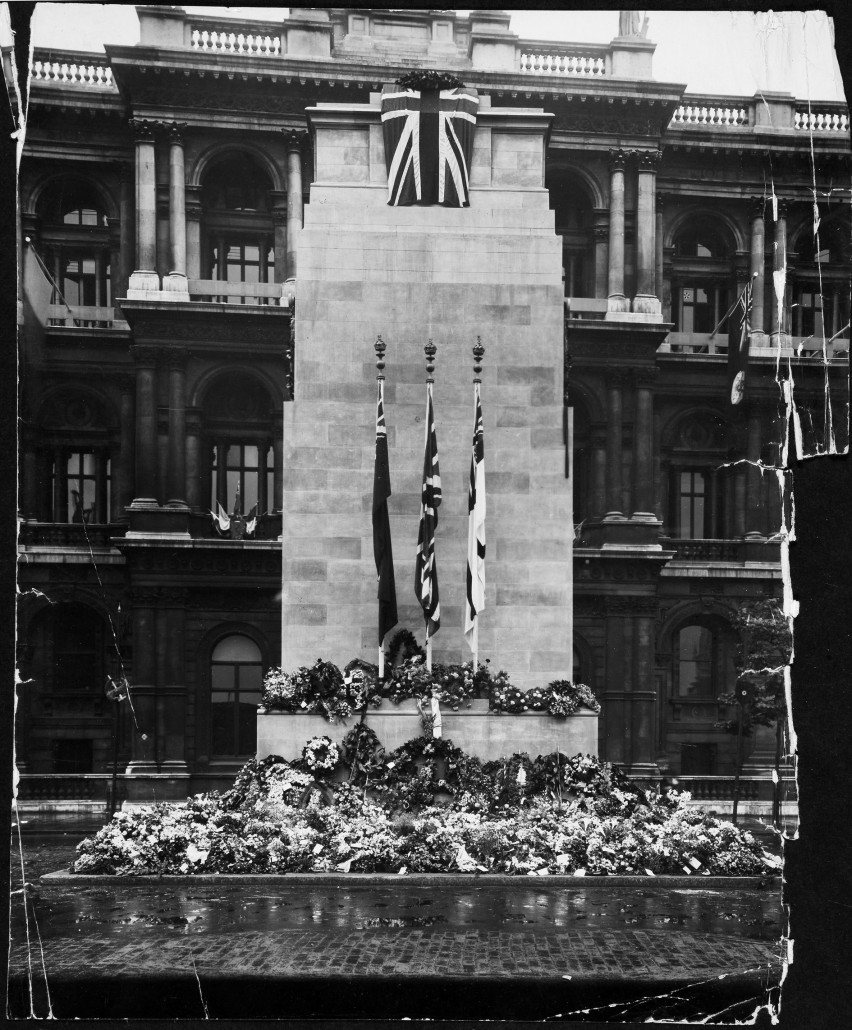 Part of the Wonderful Scene

Interest in the war was fading because the survivors wished to live in the present or the future. The popular M.P., Dr. Macnamara, said, ‘We must quickly use the vanishing emotion of the war.’ When I spoke of war and idealism at St. Martin-in-the- Fields or for Toc H. I was aware of that. But 1920 was the Cenotaph year. The Cenotaph and the Armistice silence were to arouse the fires of remembrance and we still believed that idealism would grow out of sacrifice into the peace. The Cenotaph in the middle of Whitehall and by the entrance to Downing Street was like a finger pointing skyward.

I went to Sir Edwin Lutyens to talk about it. He was an old acquaintance, for I had met him several times at Edward Hudson’s parties in Queen Anne’s Gate. Hudson was a director of Country Life, which specialized in portraying the architecture of the stately homes of England. He was a commercial man converted to art by his own paper. He bought the castle on Holy Isle off Northumberland and had Lutyens restore it for him. Then there were house parties there and the guests listened to my father read Border ballads to them. I spent a week there once just to get the feeling of the place when I was writing about St. Cuthbert. The place was lit by huge oil lamps and to get there you had to drive through the sea at low tide. It was more like a lighthouse than a castle.

The formal grandeur of the long drawing-room in Queen Anne’s Gate was very different and you’d never think Hudson could have any connection with Holy Isle. The conversation was mostly humdrum and there was no reading of ballads or reference to country homes. Lutyens did not ‘talk shop’. My impression of him was of a boisterous and facetious guest making unexpected sallies at Dr. Hagberg Wright and sometimes at me, pestering us to recite poems in Russian. The venerable librarian of the London Library would gaze into space and say: ‘I love you, believe me, When a gipsy tells you so!’ Lutyens laughed; he would have laughed more had Wright translated it, but he thought everything Russian must be funny. He got great pleasure in seeing or inventing the comic side of life. When making his jests and extravagant puns his moustache bristled like the whiskers of a playful cat.

But at his architect’s office, when I called there, he was a different man. His wide-set eyes took me in as if he were looking at a building and missing no detail. That middleaged facetiousness was absent and he was ready to talk seriously and without reserve. He told me we had narrowly missed having in Whitehall a catafalque with a rostrum for speakers, something for the Mark Antonies to mount – Lloyd George’s idea. But as something preferable he had submitted a plan for a simple obelisk, a cenotaph. It is likely L.G. had to look up the word and found it meant a monument erected to the memory of dead buried elsewhere, and that was exactly what was required.

‘But the Cecils, etcetera, were very much against it,’ said Sir Edwin. ‘They wanted a weeping Jesus, or a great cross or a sanctuary of some kind. I objected that it had to be in memory of the dead of all creeds. Even Confucianism and Hinduism. It must not exclude anyone. There was some horror in Church circles. What! A pagan monument in the midst of Whitehall! That is why we have a rival shrine in the Abbey, the Unknown Warrior, but even an unknown soldier might not have been a Christian, the more unknown the less sure you could be. There are lots of mistakes. You know the Americans are having their dead exhumed in France and the coffins are stacked up on the quay at Dieppe. One day a pile of those wooden boxes capsized, emptying out corpses which were shoved back anyhow. The boxes were waiting to be dispatched to the States by a forwarding agency, each addressed to the next of kin, but there have been some surprises at the other end. A widow opening up a coffin to have a last look at her husband uncovered a Chinaman. A man in the Middle West received his own corpse!’

Sir Edwin was not in favour of transporting the British dead to England, but he thought the innumerable wooden crosses of the battlefields should be brought over and put up in the appropriate British churchyards. Concerning the dead which the Germans had left behind, he said they ought to be transferred to mass graves in France and Belgium with a black marble monument for each.

But what the great architect has said is a small matter by comparison with the genius expressed in the Viceroy’s palace at Delhi and the Catholic Cathedral at Liverpool. He gave us the Cenotaph, of rare simplicity and beauty though now passed by without a bow, the symbol of remembrance of The Glorious Dead, the only jewel which London wears.

In 1920 a traveller could see the battlefields much as they were on the morning of peace, and I had the idea to go and walk across them. It was a last chance to view the whole wilderness of war before Time and human hands had restored Eden there. I went by myself and almost my only conversations were with the searchers for the lost dead. The Challenge of the Dead, the book I wrote, is largely a collection of word pictures. I imagine myself an artist and try to reproduce in the reader’s mind a picture and an emotion similar to my own, a task which involves literary alchemy.

Here are a few lines of picture of the destroyed city of Albert, which no one will ever see again as I saw it one evening in 1920:

Here is a house that died simply of shock. But its neighbour was hit by some striding giant with an iron fist. Rows of houses are seen cowering, as if they had their hands up trying to ward off the dreadful fate which stalked above them. Houses lie killed as it were in the action of flight, veritably in the act of treading on one another’s heels in a frenzy to get away. There are houses which are abased, houses which have fallen foremost on their faces, houses which have fallen backwards, bottom over top into confusion and debris behind, houses with their sides torn off as men’s sides were torn off in the war, exposing for one instant beating hearts. There are houses were simply the life-breath has gone out – dead, blind, empty and desolate.

I made the journey from Zeebrugge to Maubeuge through horizon after horizon of fantastic upheaval and destruction, pausing at the actual spot where on November 11th, 1918, I intercepted the brigade runner and read his message Hostilities will cease as from 11 o’clock. I was there on the anniversary and walked a few miles to be in time for the Mass for the Poilu Inconnu at the fortress church of Maubeuge. This was my third Armistice Day. The first was when I got the news; the second was on a boat in the harbour of New Orleans where, instead of silence, every ship sounded its blast or its siren and all the Negroes in the port struck iron upon iron. And on the third I was here in the cathedral of Maubeuge, wedged against a pillar by a grand crown. My eyes, wandering, rested upon an inscription, the one nearest me, on the cathedral wall: N’oublie, pêcheur endurci, que c’est pour la troisieme fois que Jésus est tombé’ – ‘Do not forget, hardened sinner, that it is for the third time that Jesus has fallen.’