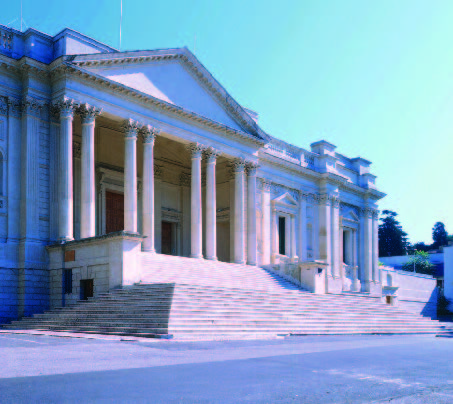 The British School at Rome. Courtesy of ADAM Architecture

Continuing its lecture series held in May this year, The Lutyens Trust hosted two talks at The Art Workers’ Guild in London. These further explored different facets of Edwin Lutyens’s work locally and abroad. Each lecture presented an opportunity for the speakers — all architects — to give an insight into how Lutyens influences them today with reference to their own projects.

Aimée Felton, Associate Director at Donald Insall Associates, set out to explore the rich and varied work Lutyens took on in London, from the restoration of Britannic House on Finsbury Circus to the more detailed insight into the extraordinary Page Street flats with their checkerboard-pattern facades in Pimlico. Those in attendance were given an insight into parts of Lutyens’s work in London that are perhaps less well documented, presented from a fascinating perspective of how these buildings are used today. Aimée concluded with an in-depth assessment of a current project at the former YWCA — now the striking Bloomsbury Hotel — which has involved uncovering lost depths in the basement, where the management hopes, one day, to reopen the original swimming pool.

The second speaker, Hugh Petter, a Director at ADAM Architecture, whose work has often sought to integrate some of Lutyens’s more canny craftsmanship, spoke of Lutyens’s designs in Italy, in particular at the British School at Rome (BSR). Hugh’s talk was entitled “In the Footsteps of Lutyens: The Story of the British School at Rome”. A former scholar himself, Hugh had the opportunity not only to study at the building but also to carry out sensitive extensions and
alterations that allowed the building to grow and then adapt to current requirements. He provided historical context with a fascinating insight into the challenges faced during the 1870s and the setting out of the expansion of Rome, such as problems with the budget, the brief and political meddling. Hugh fascinatingly demonstrated examples of the humour that Lutyens would have become familiar with — and amused by — when designing the BSR as found in sculptures that adorned buildings such as the Palazzo delle Belle Arti (Palace of Fine Arts) designed by Cesare Bazzani, and completed in 1915. The palace’s statues, with their contrasting styles of adornment, high above the entrance, spoke to different generations while Rome was being modernised. Hugh set out in careful detail — through sketches, extracts of letters and explanations of seminal figures — the challenges faced during and after BSR’s construction. Hugh concluded with an explanation of his own alterations and additions to it, including the library to the northwest and extensions to the southeast, such as a gate that drew precedent not only from Lutyens but from one of his main inspirations — Christopher Wren.

We hope that in the New Year Dan Cruickshank will complete this lecture series with a talk on Lutyens’s memorials. The date is still being finalised and we hope Trust members will keep a keen eye on the website, www.lutyenstrust.org.uk, for further details. The series thus far has given a rewarding insight into the way architects today continue to be inspired by Lutyens and are working so carefully to restore and work with many of his fine buildings across the world.

Lutyens’s Work for the CWGC