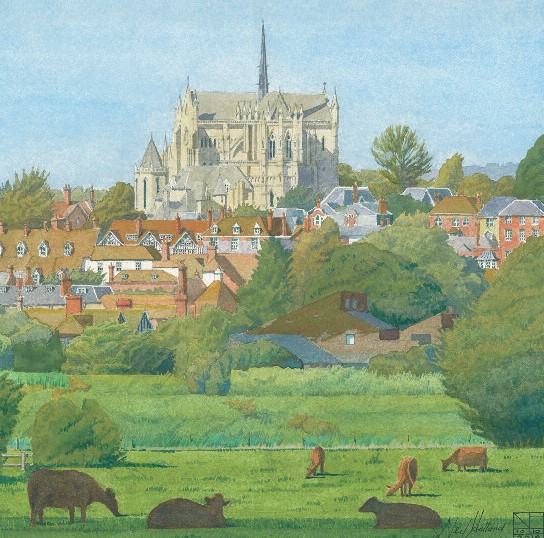 An Arundel Landscape, a watercolour, painted in 2019 by Neil Holland RIBA.

By Victoria Holland and Sue Marsh, co-organisers of the festival’s series of talks, Conversations in Private Houses, 19 August, 2019

Each year, Arundel in West Sussex holds a mixed-arts festival, which includes a programme of talks in private houses. This year, the organisers were delighted when Martin Lutyens agreed to deliver an illustrated lecture on the evolution of Sir Edwin Lutyens’s architecture. It took place in a converted barn, itself the home of an architect, on the South Downs just outside Arundel. Using carefully selected images, Martin showed how his great-uncle’s early country-house designs had been inspired by the Arts and Crafts movement, then by Neoclassicism — a body of work that led
to him being commissioned by the British Government to design the Rashtrapati Bhawan and associated buildings in New Delhi.

This lecture recalled one delivered in 2018 by Jody East, Creative Programming Curator at the Royal Pavilion & Museums, Brighton & Hove, in which she described the experiences of the wounded Indian soldiers of the First World War who were hospitalised in the building. Indeed Martin’s 2019 lecture completed the circle and further delighted the organisers of this aspect of the Arundel Festival.

Since Martin’s talk, the Indian government has announced a massive “Revamp of the Central Vista” of New Delhi, as described in the article “The Latest Developments at the Lutyens Bungalow Zone, New Delhi”.