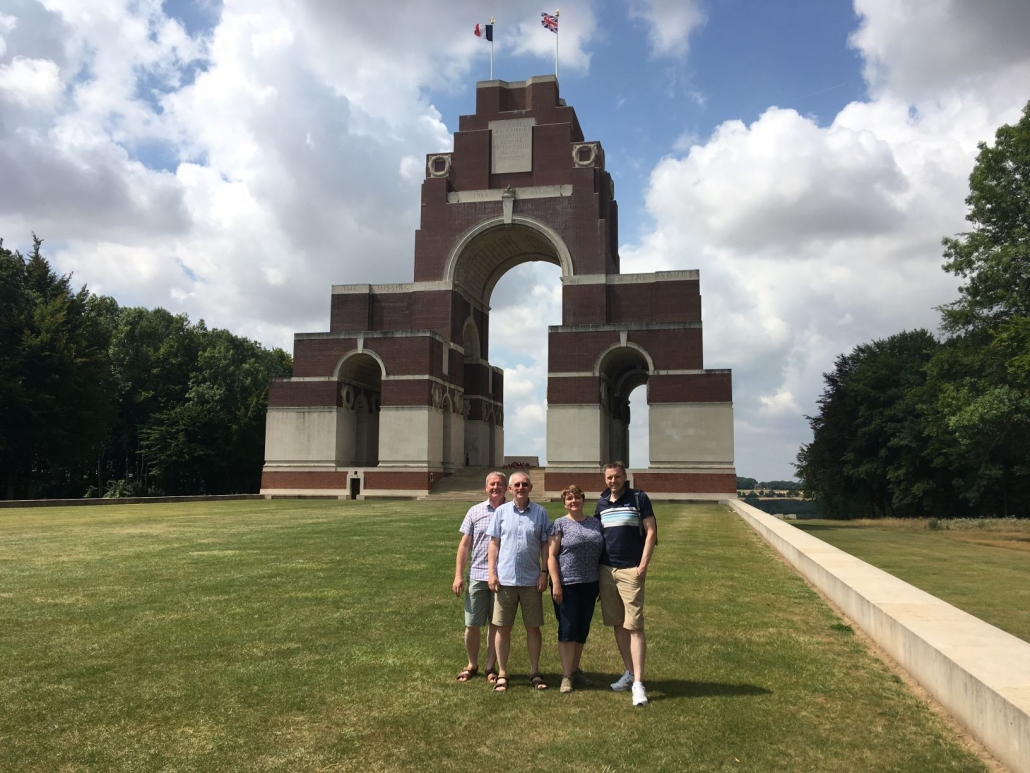 In early August, four of the Trust’s members made an easy journey to Arras in northern France by Eurostar and SNCF. Three of our party had been inspired by the Trust’s visit to the war graves of Flanders in May, 2019, during which Gareth Hardware, Head of Horticulture, Western Europe at the Commonwealth War Graves Commission (CWGC), suggested that he could arrange a tour from “cellars to roof” of the Thiepval Arch. This was an offer too good to miss!

After picking up a hire car for the day, we started off at the new CWGC Experience visitors’ centre in Beaurains on the outskirts of Arras. This gives an excellent, free introduction to the hands-on work done by the Commission, from producing new headstones and repairing metal gates and woodwork to overseeing the signage and horticulture of each site. An informative interactive audio guide sheds light on the discovery of artefacts and even the reburial of remains. Workshops arranged with large glass windows around a courtyard allow visitors to see examples of completed objects and items being worked on. I can only guess that in the little time since the centre opened, those in the workshops have got used to being, as it were, on display like this, and many gave us a smile and a wave.

We were then met by Julian Blake, Horticultural Supervisor, CWGC France, who led us in convoy to Thiepval. This was the highlight of the trip, made all the more interesting by having Julian as our expert guide. My great-uncle’s name is inscribed on Pier 16C, making this pilgrimage particularly special for me. After walking around and experiencing this open, cathedral-like space, we entered a door at ground level and began the internal tour. The undercrofts were primarily designed to deal with the drainage and run-off from the structure and some of the sluiceways were reminiscent of the sewers in the film The Third Man. We then ascended stone, spiral steps and crossed through “rooms”, continuing upwards on a metal spiral staircase to emerge on the roof. This has access to flagpoles and is like a lookout tower with its great views over what were once battlefields: a real treat. The descent was much easier, with Lutyens having reversed some of the directions of the spirals to prevent too much dizziness.

Julian then left us and we travelled a bit further south to see the Lutyens-designed Villers-Bretonneux Military Cemetery, where Lutyens later added the Australian National Memorial with its distinctive watchtower. A gentle walk up the immaculate lawn of the cemetery slowly revealed the wide base of the memorial (Raisina Hill in New Delhi all over again) and entrance to the tower. The wide public stairs make an easier ascent this time and the viewpoints are marked by a labelled compass plan in the centre of the “room” at the top. It is only when looking down from the back of the tower that you realise there is a large turf-roofed building hidden behind. This is the new Sir John Monash Centre, a museum built for those interested in learning about the Australian war experience. To be honest, to appreciate the interactive media screens here fully you need to opt for the available headsets, which we didn’t have time to do.

From here it was back to town where we planned to see the Arras Memorial built along one side of the Faubourg d’Amiens British Cemetery. This sees Lutyens in a most Classical vein with many colonnades and changes of direction, eventually leading to the Arras Flying Services Memorial, topped by a winged globe, sculpted by Sir William Reid Dick. The colourful, rhythmic planting along the lines of the headstones was particularly impressive here.

All in all, it was a busy and very uplifting day with a completely different feel from what we’d seen in Flanders. We would recommend anyone interested to make the effort, using Arras as a convenient base.