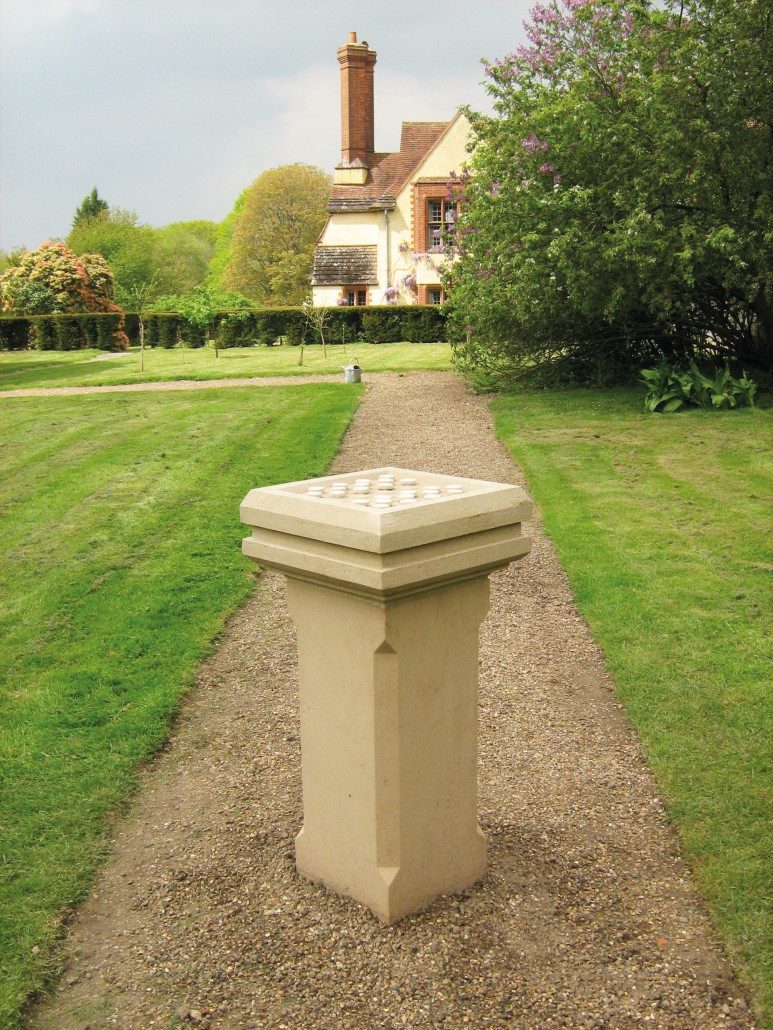 Probably for the first time in its life the Edwin Lutyens-designed house Goddards was at the centre of a television competition in early 2014. Gardener, TV presenter and former jewellery designer Monty Don made a series for More4 called Monty Don’s Real Craft, which followed the efforts of groups of young people at the start of their careers learning a particular craft. The fourth programme in the series was about stonemasonry and charted the progress of three trainee masons — Stephane, Sam and Jo — working under the tutelage of Master Mason Brad Steel. The project was initiated in late 2013 when the production company Ricochet made contact with the Landmark Trust, which leases Goddards from the Lutyens Trust, for advice on an appropriate building for the trio’s main challenge. We at Landmark immediately thought of Goddards, both as a building which epitomises craft excellence and as a place on a scale and with a setting which could accommodate the finished work. The programme was broadcast on April 28 at 9pm.

The challenge, as it was framed, was for the three contestants to create a new piece of stone sculpture for Goddards which would incorporate water. We thought this could mark 100 years since the death of shipping magnate Frederick Mirrielees, who  commissioned the house. Once the contestants had visited Goddards and imbibed its magic, they had three weeks to create the work, which I, as Director of the Landmark Trust, then judged.

The challenge was considerable, as, from the outset, we were clear that we would only agree to take the winning design if we felt the piece was genuinely good enough.

The contestants spent the day at Goddards in January. None of them had been there before or, dare I say it, heard of Lutyens! But they were all instantly interested, and we spent time inside looking at the library of books on Lutyens’s work in England and India. Three weeks later, in front of the cameras at a workshop in Shropshire, the judging took place. The winning design, a stone column by Stephane Rouget (pictured), inspired by one of Goddards’ chimneys, is a genuinely handsome piece topped with a draughts board. It now stands in the house’s orchard — a happy  addition to a place which already has a playful streak.

Ten Years on Exhibition – An Update