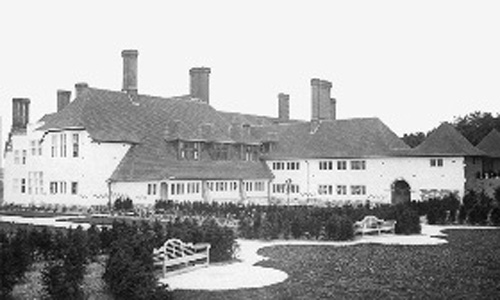 An image from James’s book on Marshcourt, courtesy of Old Bakehouse Publications

Marshcourt in Hampshire is one of the most magnificent houses, among many, which Edwin Lutyens designed in that golden period of country-house architecture before the First World War. Francis James’s book (Old Bakehouse Publications, £16) is an affectionate memoir of Herbert Johnson (1856-1949) — who commissioned Lutyens to create the house — as well as of its subsequent owners. It is a roller coaster of an account, too, of how 20th-century socioeconomic history affected the building’s fortunes. Perhaps Marshcourt is known locally as “Marsh Court”, hence James’s spelling of it, though it’s generally written as one word.

James was a close family friend of Johnson. Given Marshcourt’s importance, James rightly feels that Johnson has not been given enough attention, often being cursorily referred to in Lutyens-related literature merely as a “jobber”. James explains that a “stock jobber” operates on the stock exchange on his own account, unlike a “stockbroker” who acts for clients. In fact, Johnnie Johnson — a name he acquired when working in the City — made several fortunes! His childhood was partly spent in South Africa, for which he always retained a great affection, returning later to hunt big game. He was educated at Cheltenham College where it became apparent he was a gifted mathematician. Instead of a military career, Johnnie joined a broker in the City where his mathematical skills — he worked out his own set of mathematical tables — enabled him to play the markets advantageously. Weekends were spent Hampshire, trout-fishing on the river Test and hunting near Stockbridge where he acquired land. What he needed next was a suitable house to entertain his friends, so he turned to rising star Lutyens. Lutyens in turn saw Johnson as a dream client — rich, socially ambitious and ready to embrace his spectacular ideas for a white house, built of clunch (chalk) on the escarpment above the Test.

This book is not a history of the design and building of Marshcourt, which has been well-documented. Colin Amery, in the Arts Council catalogue for the 1981 Lutyens exhibition at the Hayward Gallery, described it as “full-blooded Tudor in style — there is a sense that the place was conceived as a great hunting lodge for a vigorous client”. Marshcourt’s brick chimneys recall Hampton Court, the gardens Italy and the interiors are a rich mixture of white plaster, walnut, oak and marble. It was built from 1901 to 1904, and life there was conducted in a grand Edwardian style, which James describes in some detail. This was interrupted by the First World War, but the 1920s saw the resumption of normal social life, and in 1924 Johnnie added a ballroom to the house to enable him to fulfill his duties as Master of the Hursley Hunt. Then his luck ran out: he was hit by the Wall Street Crash and the Great Depression and the lights literally went out at Marshcourt, which was put on the market. In the late 30s, the Marshcourt estate was acquired by speculators who sold it on to a Mr McPherson who lived there briefly. Johnnie died in 1949, aged 93.

Its subsequent history is similar to that of many a great house — it was requisitioned by the army in the Second World War. Its possible demolition was seen off when it was converted into a preparatory school in 1948 by an idealistic couple, Maurice and Mary Wright, who ran it until 1974. The school was then bought by Earle Broadbent, its owner until 1989. Lucinda Lambton photographed Marshcourt for the Lutyens exhibition where the image was displayed blown up. Once again, Marshcourt was put on the market and failed to sell due to an economic downturn, but rescue came in the person of Geoffrey Robinson MP, who already owned Orchards at Munstead. During his tenure, considerable conservation work was done. Subsequently, Marshcourt has changed hands twice. Since the 90s, its fortunes have greatly improved; it’s now a family home.

A minor quibble: it’s a shame the book’s illustrations aren’t captioned. But James has performed a great service in describing the swashbuckling creator of Marshcourt’s way of life and its subsequent owners for those who are curious about people as well as buildings.