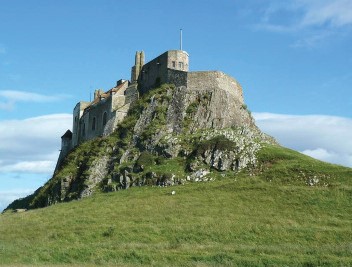 At 16, Edwin Lutyens, keenly observant of building structures and materials, went briefly to South Kensington School of Art, and by the age of 20, in 1889, was already in private practice. Dr Miller related some domestic details of Lutyens’s life before focusing on Northumbrian examples of his work. The earliest, dating from 1893, was the well-crafted reredos in the early classical Church of the Holy Trinity in Berwick-upon-Tweed. One of his last was at Meldon Park, a house designed by John Dobson in a severe classical style, where Lutyens replaced his iron staircase with an imperial one in timber.

Lutyens idolised Richard Norman Shaw, designer of Cragside near Rothbury and herald of the Arts and Crafts style, which encouraged Edward Hudson, founder of Country Life magazine, to commission him to design his country houses in Berkshire.

As owner of Lindisfarne Castle on Holy Island, Hudson then asked Lutyens to redesign and add to the building. The work was completed in 1912, and ranged from external work, such as the beautifully cobbled ramp, to major structural interior work — vaulted ceilings, arches, the use of different levels linked by steps and carefully installed fireplaces and cupboards. Already it’s Lutyens’s use of materials — slate, wood, flagstones and herringbone brickwork — that stands out. By now, Gertrude Jekyll had a working relationship with Lutyens, combining her planting schemes with his structural garden designs, and it is her walled garden that stands close to the castle. Also on Holy Island is a simple cross created by Lutyens, a design he used many times, including at Hartburn in Stockton-on-Tees.

Further good examples of his gardens can be seen at Angerton Hall, also in Hartburn, and Whalton Manor near Morpeth, which demonstrate his love of playing with levels, steps, slip paving, cobble patterns, slabs and hedging. He remodelled Whalton Manor in 1908, including the gardens, which display those characteristic features alongside stone structures such as gateway columns, a pergola, a tiny gazebo and pavilion with Tuscan Doric columns. In 1924, his daughter Ursula married the 3rd Viscount Ridley and, from 1926 to 1938, he significantly redesigned the formal gardens at Blagdon Hall. Dr Miller described the lime walk there as “a remarkable example of architectural landscaping”, using millstones, slate slip paving, obelisks, the (now) enormous hostas which soften and integrate the design of walls and steps and the circular pond with its happy arrangement of circular and diamond-shaped slabs. His front garden includes a paved terrace and an 850 ft-long canal, tapered to look even longer, ending in a circular pond, known as the “sky mirror”. In 1948-49, Lutyens’s son Robert carried out alterations and restoration work on the house after a fire there in 1944.

Lutyens and Lytton Families Reunited for a Lunch at The Ned, former Midland...

Chancel Screen to be Reinstated at Busbridge Church – and a look at other... Scroll to top
This website uses cookies to improve your experience. We'll assume you're ok with this, but you can opt-out if you wish.Accept Read More
Privacy & Cookies Policy