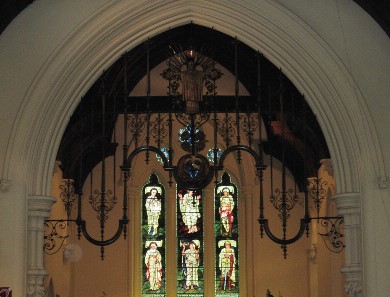 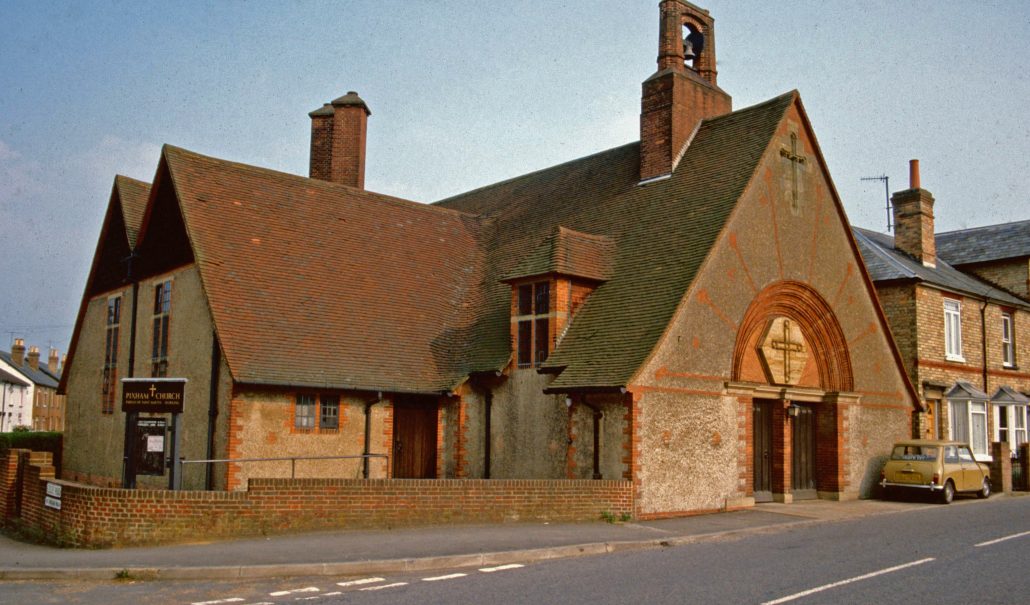 Mary Lutyens, Edwin’s mother, was a devout evangelical Anglican. The family attended the Thursley parish church of St Michael and All Angels when in the country and St Paul’s, Onslow Square when in London.

From 1886 to 1893, when Lutyens set up his first office, he worked from the family house, 16 Onslow Square, and had 41 commissions. In 1897, the year of his marriage, he had 26 commissions in progress, including a new chancel screen for Busbridge Church, originally called St John the Baptist Church, in Godalming (pictured, right).

Almost all these commissions were for sites and buildings in Surrey; his clients there were drawn from connections through his mother, father and brothers and started with his boyhood sketches of St Michael’s Church, Thursley. A number of his Surrey clients were Liberals with socially progressive and philanthropic leanings. The interrelationships of these clients is not well-documented but some of them would have attended Busbridge Church.

Of particular interest in the Trust’s casework this year is the Busbridge chancel screen which Lutyens designed at the invitation of the vicar from 1897 to 1898. It has low walls in green Cipollino marble and filling the chancel arch above is a wrought-iron screen with a central figure of Christ Triumphant (with arms raised high) standing above a dove symbolising the Holy Spirit.

The lower walls were removed and set aside by the parish in 2015. This was done for a sound evangelical reason — to link congregation and priest — which Lutyens would have understood. However, the removal of the screen — which cleverly allows the altar to be visible, while separating the chancel area as a special place — constituted the loss of an original Grade II*-listed Arts and Crafts ensemble comprising a William Morris altar frontal and Edward Burne-Jones east window. But, following representations from The Victorian Society and The Lutyens Trust, the low walls will now be replaced. This work will be part of a reconfiguration of the church for which the parish is currently seeking Diocesan consent, and the Trust hopes this will be carried out in early 2018.

In 1892, Lutyens had worked on the east end memorial chapel for Alexander Dalison in Plaxtol Parish Church in Kent, thanks probably to his brother Rev William Lutyens’s connection to Rev Mayo, its long-serving vicar.

In 1903, Miss Mary Mayo, Rev Mayo’s granddaughter, of Pixham outside Dorking, commissioned Lutyens to provide a new church for the village, St Mary’s (pictured, left). A daughter church of St Martin’s Church in Dorking, it was designed to house a multiuse village hall, too, and has a fireplace, Byzantine domed chancel and altar.

In 1910, Lutyens was commissioned by William to design a new parish hall for Otford in Kent. That hall is substantially intact today and incorporates a multi-use space with a stage and large kitchen serving 100 people. It has a splendid timbertrussed roof although this is regrettably concealed by a suspended ceiling installed in the 1960s. The Trust is working on having this removed to reveal the hall and obtain its listing.

Here Lutyens adhered to the Arts and Crafts aesthetic by avoiding pointed arches and Gothic Revival details in favour of a Byzantine style promoted by architect William Lethaby and others. Whether this was to avoid conflicts between High and Low-Church clergymen we do not know, and Lutyens did not say!

Lutyens in Northumberland – a lecture given by Dr Mervyn Miller