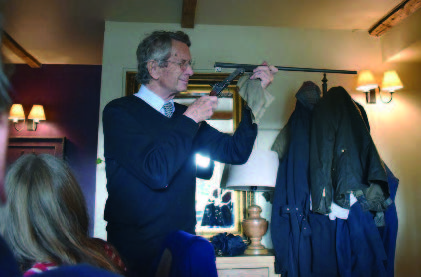 Martin Lutyens with the .410 shotgun his father used at Thursley © Robin H Prater

Thousands of photographs taken and numerous sketches drawn, but what lingers most is a memory of warm welcomes, fireside chats and a feeling that this trip was important in so many ways.

First, a brief background. Seventeen members of The Lutyens Trust America came together for the first annual “Lutyens Intensive”. These are to be three-to-four day tours which focus intensively on some aspect of Lutyens’s work. This year’s tour concentrated on Lutyens’s Arts and Crafts designs in Surrey, with Goddards as our home base. Each day we visited various works, returning in the evening to Goddards for a fireside discussion followed by delicious dinners in the Common Room. Discussions were led by Clive Aslet and myself, with topics ranging from “The Relevance of the Arts and Crafts Movement Today” and “Lutyens’s Architecture in Relation to Other Architects of his Time” to “Lutyens, Jekyll and Garden Design”. We were fortunate to have Lady Alexandra Wedgwood, Frances Edwards and Sarah Dickinson as special guests for these discussions, along with Charlotte Lockhart and Andrew Barnes.

At dawn each day, a group met to sketch various scenes at Goddards before breakfast. In the evening, after dinner, a skittles game was likely to break out.

From the inception of The Lutyens Trust America, there has been a warm and supportive relationship between our organisation and The Lutyens Trust in the UK. This was demonstrated time and time again both during the planning for this trip and our week at Goddards. Martin Lutyens, Rebecca Lilley and Paul Waite were instrumental in shaping our itinerary. Claire Hill was a tremendous help prior to and during our trip. Clive was with us for the entire week with Martin and Candia Lutyens joining us for various tours. We received as warm a welcome here as at the Lutyens anniversary dinner at the RIBA, which amply testified to the developing friendship between our two organisations.

We were also made to feel very welcome at each place we were fortunate to visit. Our tour began where Lutyens grew up, at Thursley. We were greeted with tea, coffee, biscuits and smiles. Our walking tour of Thursley included the home Lutyens grew up in, his local church and several early works, such as the Institute and the Corner. We finished with a delightful pub lunch at The Three Horseshoes and a special talk by Martin Lutyens, who spoke about his father’s childhood in the village and came armed with a poacher’s shotgun on which his father and uncle (and Martin himself) had learned to shoot; his uncle’s WW1 dress sword and a very special pocket-watch, which had belonged to Edwin’s father. Space does not allow me to describe each home we saw in detail or the delicious refreshments we were served. But they included Crooksbury, Lutyens’s first commission after setting up his practice in 1888.

There we saw Lutyens’s work over three phases of design. The second phase involved the addition of a Neo-Georgian facade, although Lutyens’s client later asked him to cover this with an Arts and Crafts elevation. At Tigbourne Court, the symmetry of the entry facade was married with more informal garden facades and beautiful detailing of the interior. Munstead Wood, Gertrude Jekyll’s home, was a very special treat — we finally toured a house we’d all seen images of and could visualise her sitting in her nearby Lutyens-designed Thunder House, where she could watch the sky during thunderstorms, or walking down the lane to church. We were impressed by its head gardener Annabel Watts’s passion for Jekyll’s garden design. We were privileged to visit Jekyll’s Lutyens-designed cottage, The Hut, and see it being lovingly restored. At Marylands, we could observe Lutyens’s impact on the next generation of architects. Oliver Hill, for whom Lutyens was a mentor, quotes the older architect in his own work yet makes the design uniquely his own. At Chinthurst Hill, our group had a wonderful opportunity to roam through a house in the process of being completely redone, its exterior under scaffolding and interiors stripped of furnishings. We imagined the end result and hoped to see the finished project someday. At Ruckmans we witnessed Lutyens’s work in his Arts and Crafts vernacular style, then his later Neo-Georgian music-room addition. Seeing this building in person was so important since photographs tell only a partial story of the juxtaposition of the two styles.

The week not only offered a very special look at Lutyens’s early designs, but an interesting conversation between enthusiasts about his architectural legacy and the importance of passing the lessons learned to future generations. Thank you to all the owners who made these visits possible.