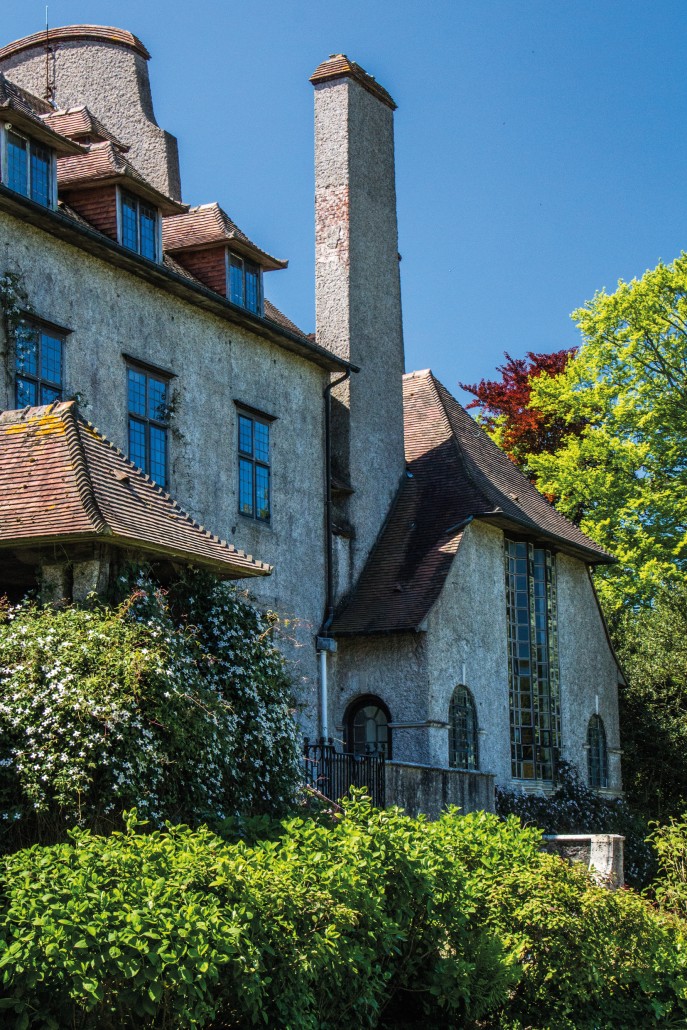 Our tour began with the hospital cemetery at Etaples, the biggest British war cemetery in the world. There are no unknown soldiers here as all the Fallen buried here died in the hospital at Etaples. No fighting took place in the area. The
memorial’s twin pavilions raised above the cemetery evoke the Cenotaph, and we all agreed that the stone flags, disallowed on Whitehall, were an important feature. We then paid a short visit to the Chinese Cemetery with an unusual gate designed
by Lutyens’s assistant JR Truelove.

Between Etaples and the Chinese Cemetery, we passed through the charming small town of Rue and stopped to look at its fine Gothic church. However, the more significant ecclesiastical treat was to come later when we arrived at Amiens, our
base for the next three nights, and explored its magnificent Gothic cathedral, the largest in Europe.

The following morning dawned bright and sunny and we set off for the drive which took us from Picardy to Normandy and the coastal village of Varengeville-sur-Mer, the site of two of the three Lutyens houses in France, all of them commissioned by Guillaume Mallet. We went first to the beautifully situated Norman chapel, perched on a clifftop overlooking the sea and the coast towards Dieppe. Georges Braque, who designed a fine stained-glass window in the chapel, is buried here. We then went on to Le Bois des Moutiers (pictured), one of Lutyens’s finest country houses anywhere. The house itself is absolutely stunning and looks at its best under blue skies with rhododendrons and roses in full bloom. A highlight of this visit was an invitation from the Mallet family to lunch at the house. We finished the day nearby at Lutyens’s small but perfectly formed Maison des Communes, built on a Y-shaped plan and with fabulous views.

The following day was dominated by visits to two more of the big four memorials, Thiepval and the Australian memorial at Villers-Bretonneux. At the latter, we were able to climb the tower to get stunning views over the somme. We also visited some smaller but important cemeteries, including La Neuville and Serre Road No 2.

Continuing the theme, the next very packed day took us to Lutyens’s first-built cemetery at Warlencourt and to Croisilles — the latter generally agreed by the group to be the finest of his small cemeteries. We also saw the last of the big four at
Faubourg-d’Amiens, which contrasts greatly with the other three in the pure simplicity of its classicism, free of the abstractions of Thiepval or the symbolism of the Australian and Etaples cemeteries. We also saw Herbert Baker’s sSouth
African memorial, felt by some to lack the “harmonic” of Lutyens (as in the harmonics of a musical note). And we visited the dramatic Vimy Ridge Canadian memorial. That evening, we attended a gala dinner where we were entertained by Tim skelton, co-author of the book Lutyens and the Great War. He gave an informative talk, which was followed by a lively discussion based on our experience of the previous days.
Our final day took us to Ypres and Reginald Blomfield’s extraordinary Menin Gate memorial via Tyne Cot cemetery, a finer example of Baker’s work than that of the previous day. This tour took in a lot in relatively few days, giving us all both a
fantastic appreciation of Lutyens’s architecture in Northern France and a moving encounter with the ravages of the First World War in this centenary year.

A much fuller account of each visit, accompanied by photos and architectural descriptions, can be found on the “hotspot” page at www.lutyens-furniture.com.