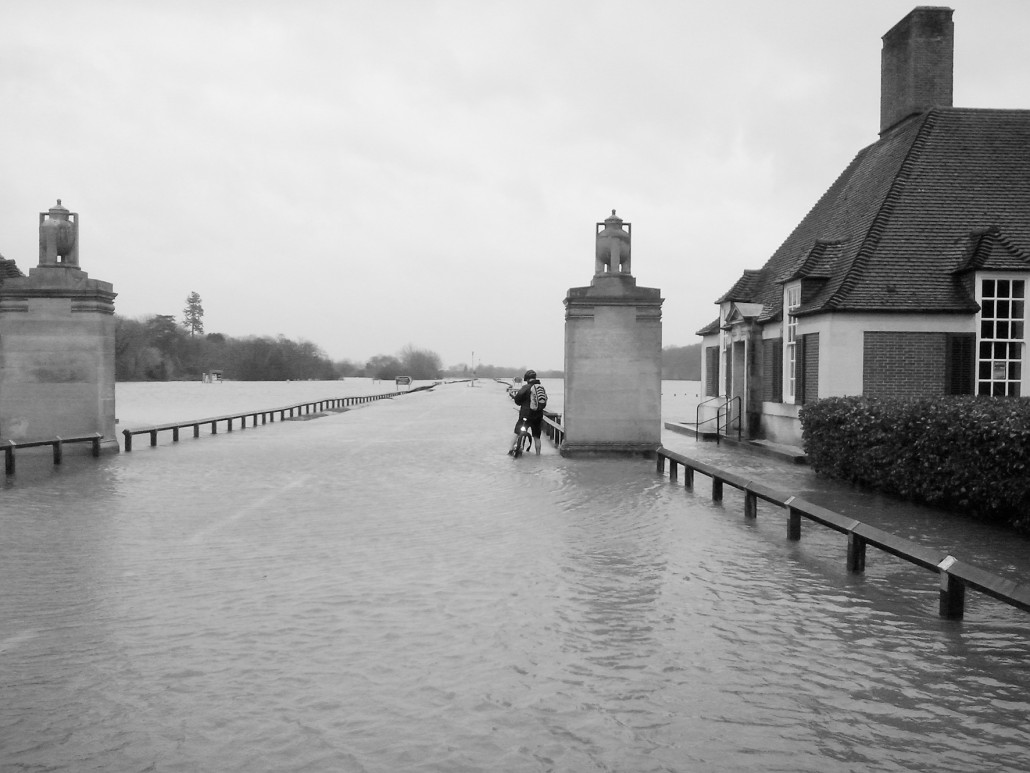 Runnymede in the flood

In 1929, Lady Fairhaven bought the 76 hectares (188 acres) of the Runnymede meads in memory of her late husband, the former MP, Urban Broughton. She also commissioned Edwin Lutyens to design and build a set of twin memorials. These stood across the road from one another, and consisted of large kiosks and posts or “piers” with stone blocks crowned with laurel wreaths and formalised urns (at the Egham end of the Runnymede meadows) and lodges and piers (at the Windsor end). She and her sons gifted the site to the National Trust in 1931.

The lodges show typical Lutyens design features — steeply angled roofs, large false chimneys and no rainwater gutters at the eves. Lutyens designed the monolithic gate piers in large Portland stones with fine joints. The overall appearance was of gate piers with a bleached white classical purity, with sharp straight edges. They are inscribed with references to the Magna Carta and Lord Fairhaven.

Originally intended as houses for the wardens of Runnymede, the lodges are currently in use as a café in the South Lodge and the estate office in the lodge opposite. The A308 road, which winds between the two gate piers and passes the Runnymede meadows, has now become an extremely busy and noisy rat run to the M25.

On January 24, 2012, the left-hand gate pier — near where you leave Old Windsor on the A308 Windsor road — was hit by a car which then burst into flames. This pier’s bottom five stones suffered different degrees of damage caused by the force of the vehicle hitting it, and by the fire. Portland stone, a limestone, withstands a temperature change of approximately 300°C. Above this, discolouration will occur as the carbonate of lime changes colour to red and, in extreme temperature, calcifies to quicklime. In this instance, the pier was badly fractured, blackened by smoke and, in parts, discoloured. Emergency personnel at the scene dismantled the taller element of the pier to make it safe with only the base plinth stone remaining on site. The rest of the masonry was taken to the yard of Cliveden Conservation Workshop on the Cliveden Estate at Taplow, near Maidenhead.

All the stones of the damaged pillar needed cleaning due to smoke damage. However, although the heat had damaged the stones the surface could be cleaned. The Cliveden team’s cleaning method involved using only a brush and water (under high pressure in some areas). No additives or grit were used due to the softness of Portland stone.

The lower stones were shattered so badly that sections needed replacing, though not the whole stones, new joints being formed through a wavy, not straight, line. The third and fourth stones up also required some new lettering to be inscribed. The remaining stones all needed cleaning up and reinstating. The only further damage was to the stone below the urn (the urn’s socle) which required some minor repair.

Although the stones were previously only held in place by their own weight, it appeared that the urn had been kept in place using a dowel although none was found. In view of this, a stainless-steel dowel was inserted between the urn and its socle when the urn was reinstated.

Once the stones had been cleaned and repaired, Cliveden Conservation were able to make a remarkably speedy reinstallation of the stones on site. On 7 November, in pouring rain and next to the exceptionally busy A308 road, the National Trust were delighted to see the pillar put back in its place. The cost of clearing up the site, removing stones and making safe was £2,000, while that of the repair and resinstatement was £18,000.

June 15, 2015 marks the 800th anniversary of the sealing of Magna Carta at Runnymede. Alongside an events programme for 2015, we are developing plans to use the 800th anniversary as a catalyst to tell the stories of Runnymede and Magna Carta better; improve the conservation of the historic landscape and buildings within it; provide a more comprehensive and considered learning offer in conjunction with our partners, and encourage more people to spend time at this unique place. A masterplan was produced in summer 2013 and we are using elements of it to pull together a bid to the Heritage Lottery Fund. One aspect of anticipated works centres on the Lutyens lodges and neighbouring Victorian Boathouse owned by Brunel University. We are investigating opportunities to create a unified visitor hub that will provide an exhibition space, visitors’ welcome area, tearoom, better visitor orientation and an education space. Watch this space for further news!

James Lees-Milne – Extracts from his Diaries