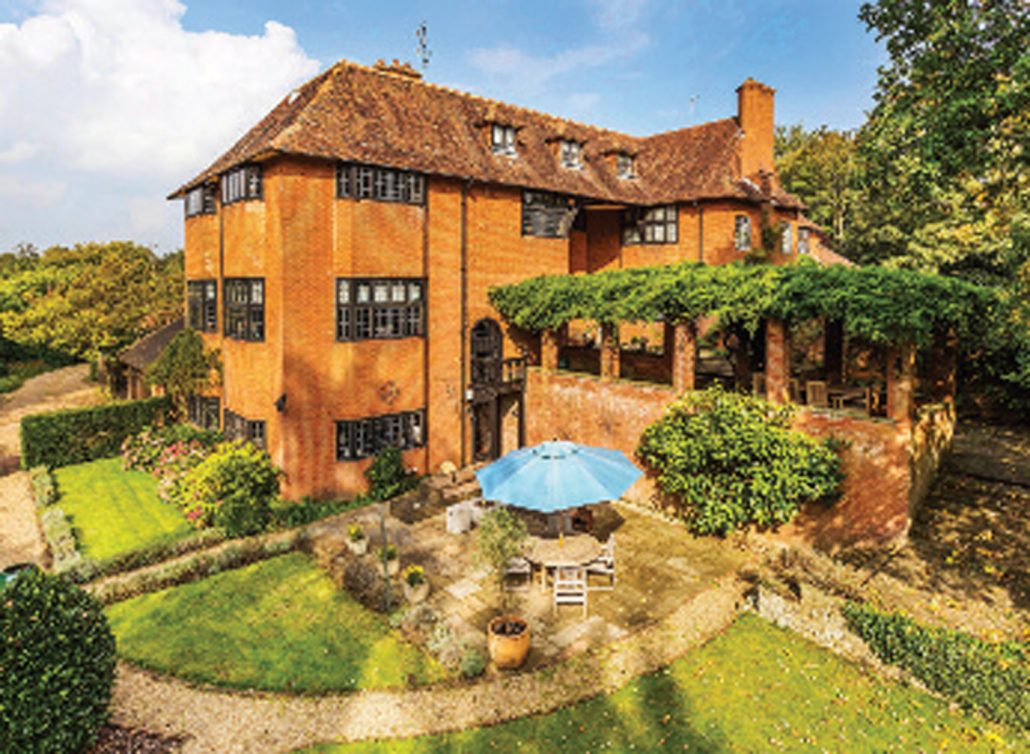 A distinctive red-brick Surrey vernacular house with a modernist twist, Fishers Hill was built from 1900 to 1901 for Gerald Balfour MP and his wife, Lady Elizabeth Balfour, Lutyens’s sister-in-law. It’s of particular note as Lutyens made use of the sloping ground to the west to create two tall, three-storey modernist bays, similar to those at the contemporaneous Red House in Godalming and forerunners to those at Castle Drogo and Penheale Manor. The house was divided into four homes in 1947 and later Grade II-listed. The property for sale is the entire 4,600sq-ft west wing, incorporating the bays and spacious, beautiful accommodation. It includes a 30-ft drawing room, sitting room, dining room, study, kitchen-cumbreakfast- cum-family room, utility room and pantry, large master bedroom suite, a further three bedrooms and two bathrooms. Outside is a wisteria-covered pergola and flagstone paving incorporating a pond, lawn and woodland beyond (1.75 acres in total). Available through Seymours. Guide price: £1.85m.
www.seymours-estates.co.uk 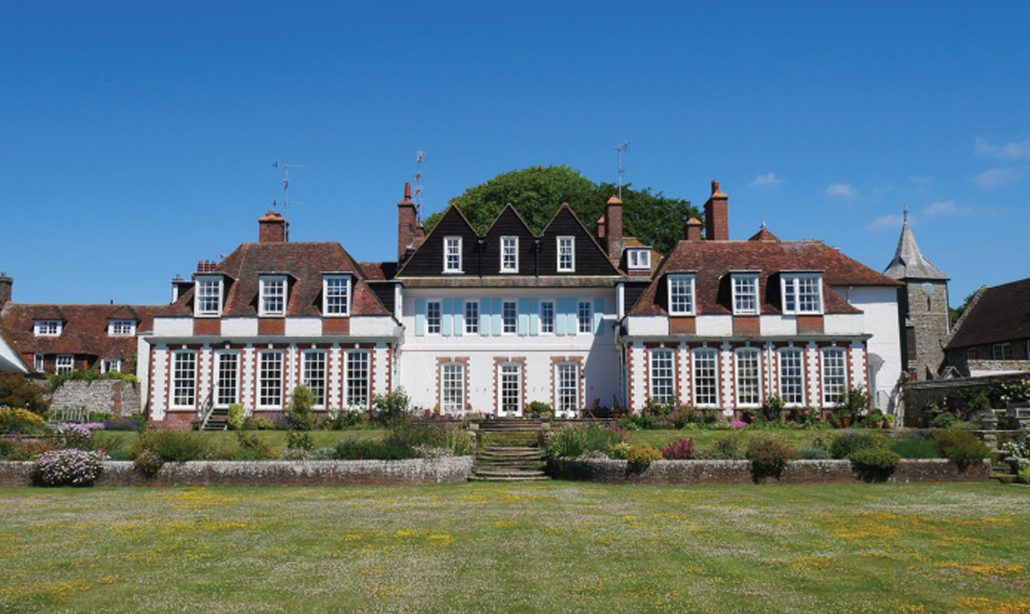 The Hoo is a fascinating, distinctive design of 1902 and one that Lutyens considered a great success. He was commissioned by Alexander Wedderburn QC to remodel and extend a small house with a long south-facing garden by the church in the village of Willingdon on the outskirts of Eastbourne. The house was transformed: the centre block of the symmetrical garden elevation contains the original building to which were added three gables over a coved cornice as well as new, substantial five-bay Classical wings to each side with tall sash windows and hipped roofs. The whole frontage includes plenty of the neo-Georgian motifs which were to feature so much in Lutyens’s later work. The house is built on the road opposite the church and this elevation contrasts with the rest of the building since it incorporates tall, narrow oriel windows like those at Le Bois des Moutiers at Varengeville-sur-Mer in northern France (also seen at Ferry Inn, Rosneath, near Glasgow). Its entrance is through an arch in a wall leading to a small courtyard with a gabled wing to one side.

The sloping garden was terraced, the main area of level lawn being bordered to the south by a parapet wall and central wrought-iron balcony flanked by a pair of Classical square gazebos in flint with red-brick dressings and quoins, each topped with a hipped tiled roof. These stand at the top of the steps on each side leading to a lower level. Set into the retaining wall beneath the balcony is a circular lily pool with a domed, red-brick hood.

Pleased with the result, Lutyens wrote to his wife in September, 1903, “I’m on the train on my way back to London from The Hoo. The Hoo is a great success — all windows! You must see it and I am treated with great deference as architect and all my jokes are much appreciated! So I am cheered.”

In 1955, after a spell as a girls’ school, the house was converted into 11 apartments and was Grade I-listed, while the garden, gazebos, steps and walls were Grade II*-listed.

The property for sale within The Hoo is a ground-floor, 953-sq ft, two-bedroom apartment. It faces south, with access from the sitting room to an area of private garden and the communal garden with gazebos beyond. Guide price: £365,000 through Rager & Roberts.
www.ragerroberts.co.uk 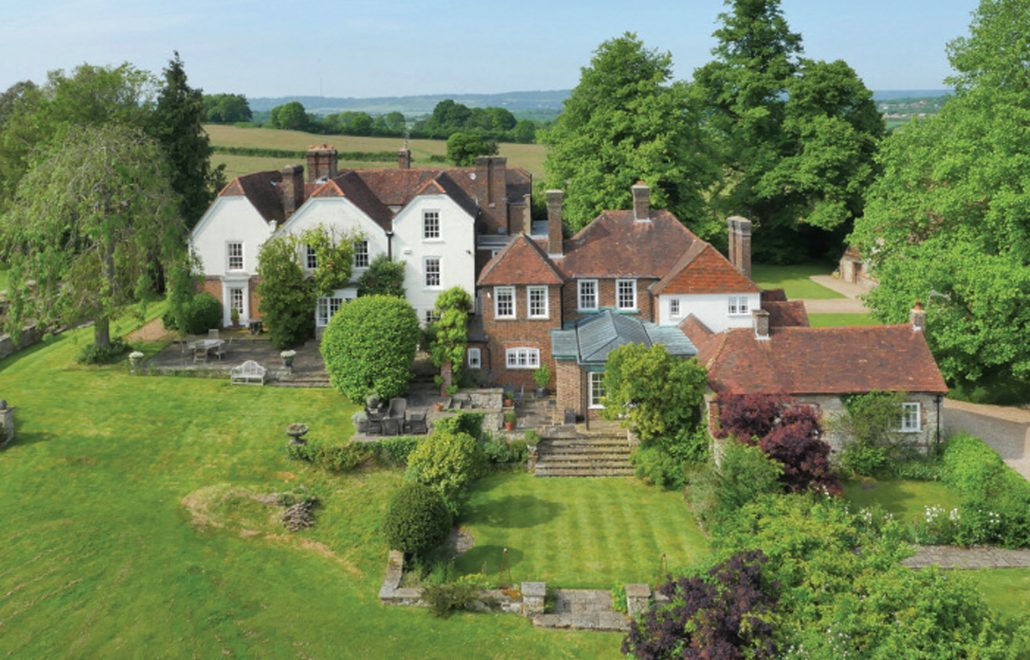 The attractive village of Plaxtol in Kent drew Lutyens on a number of occasions to undertake work for the Dalison family. He drew up proposals to rebuild the east end of the church as a memorial to Mr M Dalison (although this was not executed, a drawing of it survives in the RIBA’s collection, dated 1888). In 1926, the next Dalison generation called Lutyens in to remodel The Grange. With Elizabethan origins, the house had been refronted in 1702 in a Queen Anne manner described by Nikolaus Pevsner as “eccentric”. The Grade II*-listing makes reference to Lutyens remodelling the west elevation and incorporating the 19th-century stables and a cottage to provide more accommodation. Two years later, he provided a memorial cross flanked by two Dalison monuments at the north end of the churchyard, which Pevsner described as “an impressive composition”.