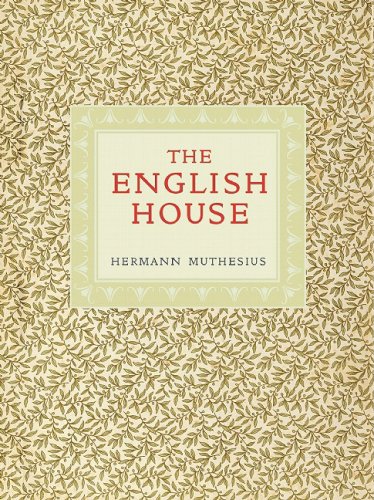 Lutyens and The English House

In Part I of my review of the superbly presented, three-volume facsimile edition of Hermann Muthesius’s The English House, I concentrated upon his appraisal of the early work of Edwin Lutyens, and his burgeoning collaboration with Gertrude Jekyll. This time I shall focus on contemporaries of Lutyens, across a wide stylistic spectrum. Although initially published in 1904, a second edition appeared in 1908, reflecting critical acclaim of both author and his subject. Writing from his home at Nikolassee, in the south-west suburbs of Berlin, the author explained that he had brought the text up to date, but any further editions would require more illustrations for ‘many new houses of exceptional quality have been built’. We can all speculate about what might have been included, but what we have is already chock full of delights.

Take Chapter IIB of Volume I. It opens with W. R. Lethaby’s imposing ‘Avon Tyrrell’ (1891), a commission outsourced through the generosity of Richard Norman Shaw, who had garnered a generation of younger Arts and Crafts architects in his office (but not Lutyens, who had longed to be one of their number). Lethaby despatched his robust country house efficiently, in Free Tudor style, with bold asymmetry on the entrance elevation. The more chaste Georgian revival of Ernest Newton brought up ‘Red Court’ (1894), Haslemere, about which Muthesius commented ‘recently, especially, Newton has moved steadily closer to the entirely undecorated, broad style with strong emphasis on the effects of material and natural
colouring’. I wonder whether Lutyens knew this house, with its welcoming countenance, and the arch headed sash windows and prominent keystones so typical of his Wrenaissance work.

A few pages later we meet Voysey, not in the Home Counties (although ‘Norney’ (1897), Shackleford makes an appearance in Volume III) but at ‘Broadleys’, Windermere (1898), always regarded as among his finest houses. Muthesius praises him for the unity of his architecture, integrating house, furniture, carpets, wallpaper and gardens, synthesising ‘work that had been the province of William Morris and that which had belonged hitherto to the architects’. Teutonic admiration of ‘the total artwork’ here shows its colours. He reproduces the famous view of the lakeside front, with three bow windows confidently almost independent of the otherwise encompassing hipped roof (its green Westmoreland slate covering for
once appropriate in a vernacular context). The mullion spacing in the centre reflects the full height living hall – revival of the mediaeval houseplace, so spectacularly used by Lutyens at ‘Little Thakeham’ (1903). The interior views of its drawing and dining rooms, showcasing Voysey’s furniture at its finest, reflecting that ‘the cottage is his [Voysey’s] ideal, even when he is building houses of a size and luxuriousness more appropriate to a palace than to a cottage’.

A few paragraphs on, and a couple of miles uphill, we come to the work of Baillie Scott (then resident on the Isle of Man), one of ‘the purely northern poets among British architects’. ‘Blackwell’ (1899), poised high on the eastern slopes above Windermere, is where ‘architect and interior designer merge, so that one is unthinkable without the other’: Muthesius also praised the ingenuity of Scott’s planning. The flamboyant studwork of the two-storey hall mutes its spatial complexity, particularly the snug gallery above the inglenook fireplace. By contrast, the drawing room is cool, sophisticated, all sweetness and light, particularly the inglenook, an enchanted woodland with its slender supports having carved foliated capitals, matched by the filigree metalwork of the ends of the firebasket, melding art and craft. The recent immaculate restoration of ‘Blackwell’ as an outpost of Kendal Museum is a ‘must-see’ for all Arts and Crafts enthusiasts (and contains some of the furniture collected by Roderick Gradidge).

On the Yorkshire side of the Pennines, Muthesius commends an excellent house ‘Banney Royd’ (1900-01) at Edgerton, outside Huddersfield, designed by Edgar Wood, a progressive and too little-known Manchester architect. Its plain, rugged stone exterior shelters a well-crafted interior, with excellent carved fireplace surrounds. There were many architects of this calibre – Muthesius discussed work by W.H. Bidlake, Cecil Brewer, Walter Cave ad Leonard Stokes to round out his survey, and, of course, the early work by Lutyens, which I flagged up in Part I.

Muthesius was already conversant with work by the Glasgow Four: Mackintosh, McNair and the Macdonald sisters, who had already exhibited at the Secession in Vienna. He became a close friend, and, according to Dennis Sharp, Eckhart Muthesius claimed Charles Rennie Mackintosh as his godfather. Mackintosh and Baillie Scott had also submitted high profile entries in the 1901 competition for ‘An Art Lover’s House’, promoted by a Darmstadt publisher. Muthesius drew the contrast between Voysey’s pastoral plainness and the Mackintoshes’ imagination led design, which borrowed ‘the idea that Whistler introduced into painting for the decoration of their rooms’. How close we are to Lutyens’s comment about the
Mackintosh-Cranston Tea Shops ‘as rooms where Whistler is worshipped and Degas deified’! The rooms Muthesius considered were in the Mackintosh flat on Mains Street, Glasgow, notably the white drawing room. Furniture and fittings were later transferred to their Southpark Avenue house, now reconstructed in the Hunterian Museum.

Significantly Muthesius distinguished between their stylised drawings ‘which always give a distorted picture’ (perhaps a wry reference to the Art Lover’s House portfolio) and their ‘real rooms, those intended to be lived in’.

Sadly only the plans of Mackintosh’s masterpiece, Hill House, Helensburgh; it is fascinating to see that the original name was ‘Blackhill’, perhaps a pun on the name of the client, Walter Blackie. We must regret that the revised edition with photographs of this, and much else, never appeared, although the earlier ‘Windyhill’ of 1900 made an appearance. But from Helensburgh, it is but a short boat ride across Gare Loch to Lutyens’s extended ‘Ferry Inn’ (1896), amusingly denoted as ‘Home for Sailors’ by Muthesius. Here the famous corner oriels made their bow, more boldly used at ‘Le Bois des Moutiers’, which has a number of Mackintosh characteristics. Muthesius presumably knew little of this house, ‘English-abroad’, but he did include ‘The Leys’ Elstree (1901), a fine design by George Walton, originally a Glaswegian contemporary of Mackintosh. Its finely detailed Living Hall shows awareness of the ‘Art Lover’s House’, but is not so different from Voysey’s work at ‘Norney’, illustrated with a choice selection of interiors in Volume III of Muthesius’s book.

As I concluded last time, this is required reading for anyone seeking to understand just why Continental architects and decorators were so excited by the remarkable flowering of British domestic architecture, and the way in which its philosophical basis paved the way for Bauhaus minimalist modernism in the 1920s.

Congratulations are in order for Dennis Sharp, and all concerned with every aspect of this superlative publication.