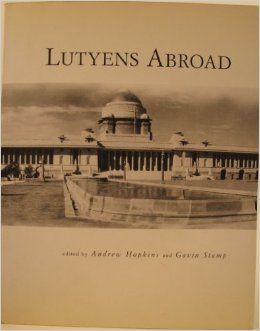 The Royal Institute of British Architects Drawings and Archives Collections house what survives of Lutyens’s archive. The nucleus was presented to the RIBA in 1950 and since the 1960s, the Institute has sought to acquire Lutyens material whenever possible. The most recent acquisition has been a group of 62 drawings for the British Embassy in Washington DC, USA, dating from October 1926 to March 1927. These are drawings for the Embassy as built and are therefore office copies, which complement the three autograph sketches for the building that came to the RIBA in 1950. They were presumably preserved in the Embassy as a working collection should the need arise and appear from slight damp damage to have been stored in the basement and forgotten.

A witty and revealing account of the whole project can be found in the article by Gavin Stamp and Allen Greenberg, ‘Modern Architecture as a very complex art: the design and construction of Lutyens’s British Embassy in Washington DC’, Lutyens Abroad: the work of Sir Edwin Lutyens outside the British Isles, edited by A. Hopkins and G. Stamp (London 2002). It does not confer much honour on the petty-minded bean-counters in the Treasury who still take such pleasure in blighting the lives of the artistically aware. It was Treasury penny-pinching that resulted in such an unwise reduction of the scheme that even before building was completed, it was blatantly obvious that the cuts had been too extreme. The occasional
awkwardnesses in the present building are the result of Lutyens having to put things back into the design at a late stage.

The idea for designing a new embassy was broached in April 1925 when Lutyens was in America to receive the Gold Medal of the Institute of American Architects. The site proposed was cramped and it dictated the form that the Embassy took, with the Ambassador’s residence at right angles to the Chancery offices facing Massachusetts Avenue. Characteristically, Lutyens turned the disadvantage to advantage with his dramatic bridge (doubling as a porte-cochère) linking the offices to the Ambassador’s residence and allowing him to build a particularly handsome double staircase rising from the drive to the ground floor. The sloping site gave Lutyens the opportunity to play with a complex arrangement of paths and stairs connecting buildings, gardens and driveways.

The style of the building is basically English Georgian but with several nods in the direction of American colonial architecture. Stamp and Greenberg, who knew of these drawings, regard it as the finest Embassy building in Washington DC and one of the very few that add architectural distinction to the city. The RIBA is extremely grateful to H.E. Sir David Manning, the British Ambassador in the USA who, on behalf of the Foreign & Commonwealth Office, presented these drawings to the President of the RIBA at a reception in the Embassy in October 2006.

The drawings have been catalogued and are now available in the RIBA Drawings and Archives Study Room at the Victoria and Albert Museum. Should anyone wish to see them, please ring 020-7307-3708 to make an appointment.