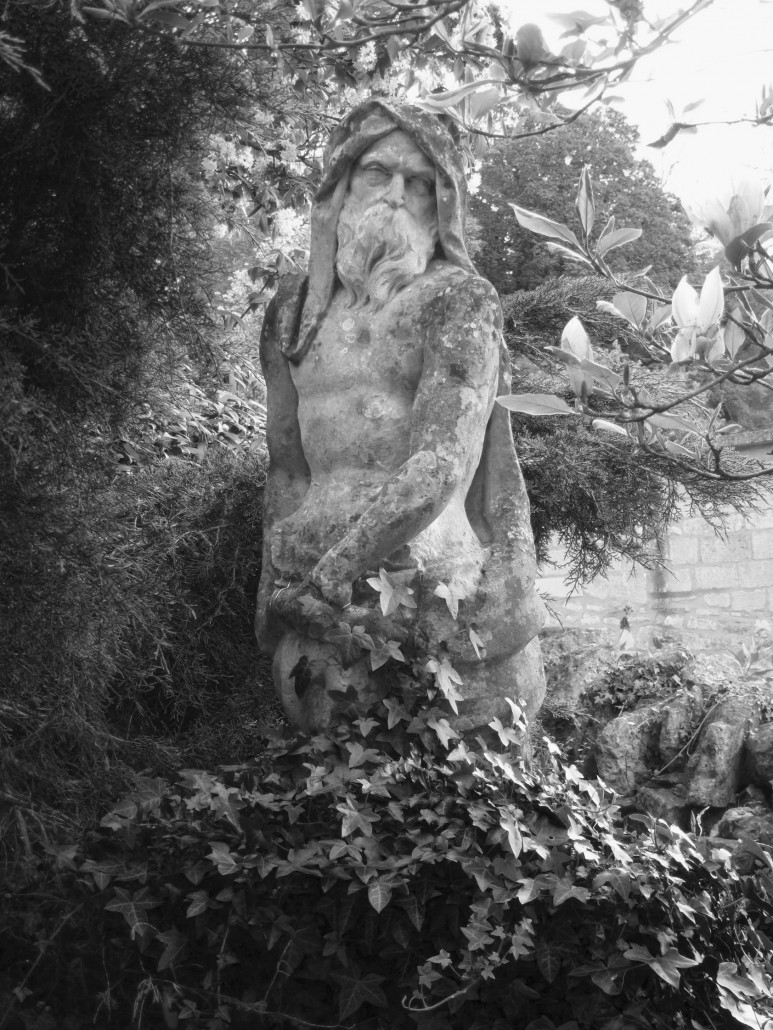 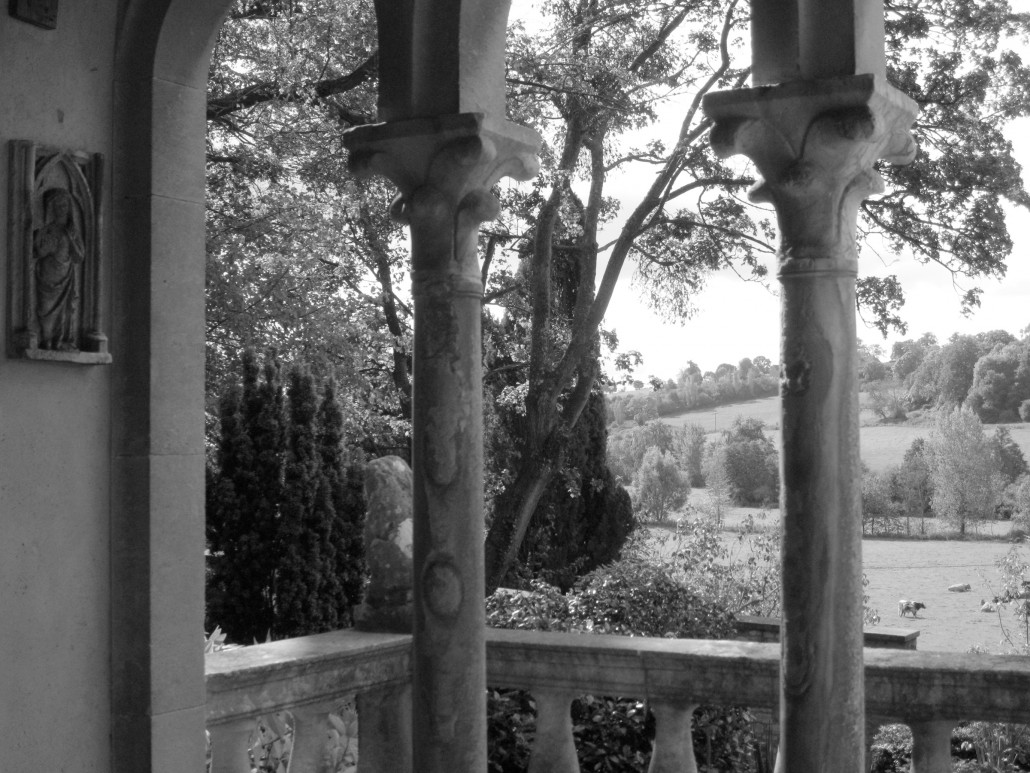 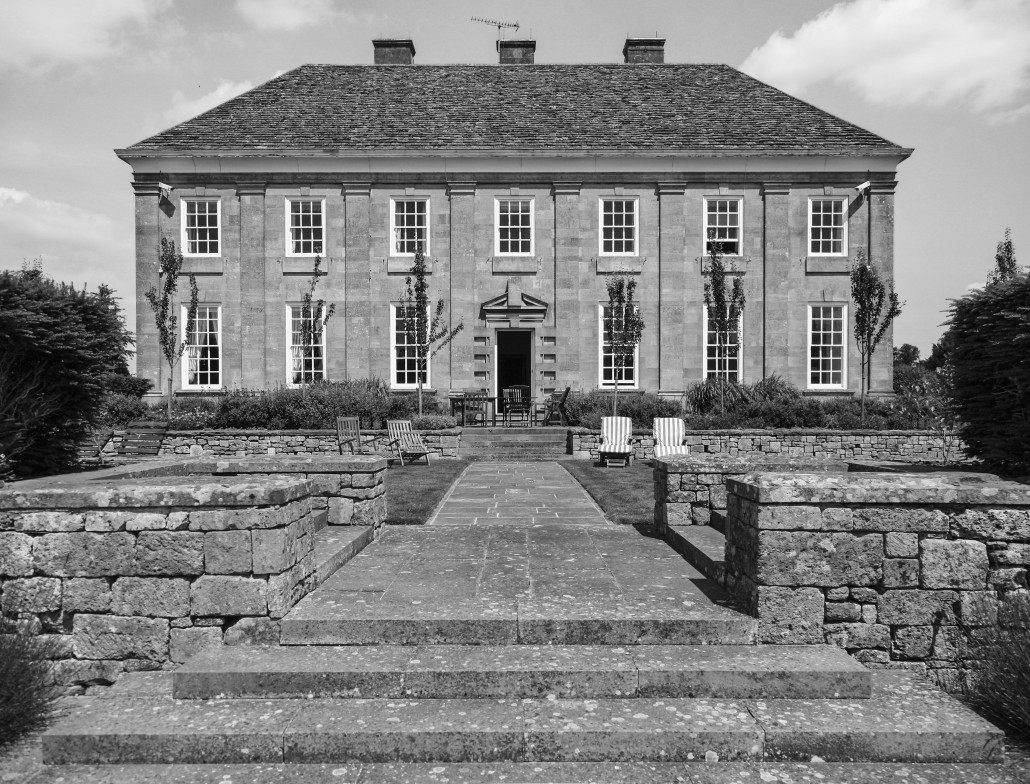 This proved a very informative and enjoyable tour. The organiser, Janet Allen, even managed to select a day with rare pleasant weather in an otherwise disappointing Spring.

The first impression, on nearing Harold Peto’s Iford Manor, is one of entering another world. The lanes, carved by a less frantic age of carts, are terrifyingly narrow in the age of tractors, whether Chelsea or John Deere. A final bend gives sight of a mediaeval bridge, its parapet surmounted by Britannia, and the Manor itself set against its steep hillside. This is the secret world that Peto discovered, derelict, in 1899 and chose to make his home and, more significantly, his garden.

The garden is rather like an outdoor Soane Museum, presenting at every turn, some ancient artefact or architectural fragment placed to give spatial structure and identity. But it is always a relaxed, informal, structure. Lutyens visited Peto here in 1914 and it would be interesting to know what he thought of the garden. I think it is one that he could never have made himself. Such a casual and serendipitous plan, obedient rather than challenging to the landform, would not perhaps satisfy his powerful instinct for geometry.

If Peto’s Iford is an informal garden, it can be no easy one to maintain. The present owners, with few garden staff, are willing slaves to this picturesque but impractical terrain. These are not wheelbarrow, let alone ride-on-mower, friendly contours.

For me, the most memorable feature of the garden was the cloister. The view through its colonnade, across the framing balcony, to the countryside beyond is true theatre. This is just one of several outward views the garden offers as it exploits its hillside setting. This seems the strong guiding idea underlying the garden, but in its detail it is all capriccio, the work of a man capturing and taming a wilderness yard by yard.

Mells Park was built by Lutyens for the Rt Hon. Reginald McKenna in 1925 to replace an earlier house lost in a fire in 1917. The new house is described by Hussey as “not especially notable” and it fails to feature in the Memorial Volumes. Indeed, the few published photographs do give the impression of an elegant but somewhat sober house. But, as is found so often with Lutyens’s supposed ‘also rans’, a visit reveals something rather more interesting. The house does sit rather quietly in its grassland setting, with only a narrow margin of adjacent formal garden. But the drama begins with the approach. The long drive climbs gently through the park, between ancient stands of trees, and eventually reveals the house.
But it then diverts towards what appears to be the rear. Arriving at a stable yard, you are enticed to walk beneath an arch set in a wall of rather haphazard stonework, to enter a cloistered courtyard. These offices and stables are by Sir John Soane and survive on axis behind the house. There are two courts, divided by a twostorey pedimented structure. Lutyens’s remodelling enhanced this arrangement by placing his grandly carved back door to the house on Soane’s axis. Lutyens also wrapped Soane’s stone arcade in front of the cross wing, which he then gutted to permit the crossing of the estate road. (See Ptolemy Dean, Sir John Soane and the Country Estate, 1999, pp 192-93).

From the courtyard, a short flight of steps rises to the front door. Inside, the small entrance lobby is a cool, sombre, but architecturally exquisite space. Lutyens then continues his sequence of surprises. The house is set into rising ground so we find ourselves still at basement level. Stone steps rise on the right, then turn to the left, before entering the more comfortable spaces of the house. As is so often with Lutyens houses, reception rooms are generous in size but relatively few in number. Typically they focus here, with little regard for economy, on a monumental staircase. The interior decorations are not by Lutyens but by Sir Herbert Jekyll.

But this really is a house to live in. Many of our party remarked that the house, though grand, appeared very comfortable and homely – a view endorsed by the owners. We were particularly privileged in being entertained to lunch in the dining room, experiencing the house as guests, not just tourists. The present owners rescued the house in a sound but rather forlorn institutional state and have made it again a warm and welcoming home. They must be credited also with some well-considered projects including small additions to the formal garden around the house, the creation of informal gardens at a little distance and, in the valley below, the huge task of restoring lakes that had reverted to scrubby marshland. They are now contemplating restoration of the pre-Lutyens stable courtyard which has undergone various disfiguring interventions. The aspiration is then to realign the drive to enter more dramatically on the stable axis thus further enriching the surprise approach. I suspect Lutyens would approve. Perhaps, one day, the owners will be tempted to reinstate the window shutters that once enlivened the elevations of the main house.

In addition to his work in adapting Mells Manor for the Horner family, Lutyens designed some small but significant structures in the village. The War Memorial comprises a concave retaining wall, incorporating stone seats, set beneath a yew hedge. Rising above the wall a central column, topped by a statue of Saint George and the Dragon, appears a little too small and delicate against the more muscular stonework below. But the memorial does effectively command an otherwise unremarkable junction of two lanes.

Less monumental, equally touching and more charming is the memorial to Mark Horner, whose teenage death is commemorated in an inscription by Eric Gill. The memorial takes the form of a triangular shelter of stone beneath a pyramidal roof. Though small it is a focal point in the village. Informal steps lead down to the Mells River and create a sense of lively connection between the street and the river, which flows otherwise secretly through the village. It is easy to imagine this spot, on summer days and through the decades, with villagers resting in the shade while children splash with the ducks in the shallows.

The church contains a number of Horner and McKenna family memorials. Most remarkable is that of Edward Horner, a victim of the Great War. Atop a cenotaph-style Lutyens plinth, a bronze statue by Munnings depicts Edward in uniform and on horseback. Poignantly, the wooden cross from the original field grave is inset within the stonework of the plinth.

The entire memorial was recently relocated, for flimsy and heartless reasons, from its former context within the family side chapel despite protest from the Lutyens Trust. Whilst it might now be easier to photograph, the statue, being just a fraction of life size, seems disconcertingly miniature in the greater vastness of the church.

Reginald McKenna and members of the family are buried at one corner of the churchyard. The chest tomb shows Lutyens in his unmistakable elemental mode, all is pure geometry. At each corner of the plot, trees planted as sentinels have grown to form a chapel-like canopy protecting the tomb. Protecting…or perhaps now grown large enough soon to threaten it? But meanwhile the effect is quite magic.

There is a strong sense, at Mells, of a village where Lutyens worked not just for clients but with friends.

A Forthcoming Documentary on the Career of Edwin Lutyens