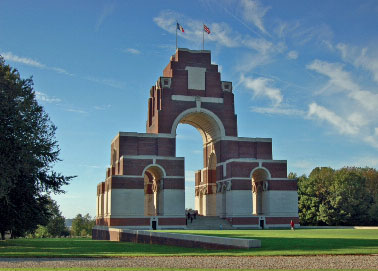 A sharp-eyed member of The Lutyens Trust spotted that page 91 of the Chancellor of the Exchequer’s Autumn Statement included the following:

2.254 Thiepval Memorial — The Government will provide £1.6m towards the restoration and enhancement of the Thiepval Memorial in northern France as part of the First World War commemorations marking the centenary of the Battle of the Somme in 2016.

On the face of it this is extremely good news, as the memorial is in need of remedial work to the pointing and to stop water ingress through the roof. There are other kinds of work The Lutyens Trust also considers to be priorities, and Victoria Wallace, Director General of the Commonwealth War Graves Commission, has promised to invite us to comment on its proposed work programme. We therefore hope to be able to contribute to the development of a detailed conservation plan, although it is too early to say what this will cover and it remains to be seen what exactly is meant by “enhancement”. We hope to be able to give further information on this important development in the Summer Newsletter. In the meantime, we are grateful to the CWGC for applying for — and to the Government for making — this considerable grant towards the preservation of this great memorial.