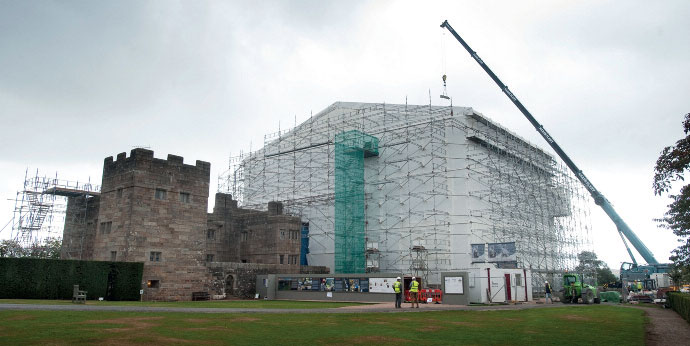 The 100-tonne crane (above) used at Drogo to lift the lintels before they were carefully positioned over the windows (below). © Stephen Hayward 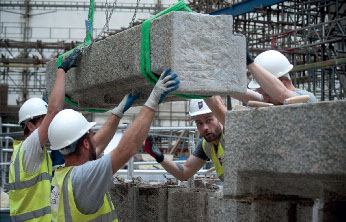 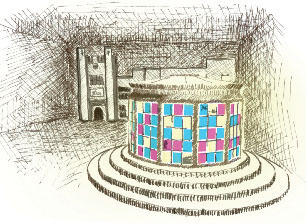 In our Spring 2014 newsletter, we reported on the National Trust’s impressive five year, £11m project to rescue Castle Drogo, which has suffered from water penetration through its roof, walls and windows. By 2012, this was threatening the steel in its structure.

Since then, significant progress has been made on the work to its south wing on all its elevations. To begin with, the masonry above roof level needed to be dismantled — hence the spectacular scaffolding structure that covers it — and this has now been completed. Now the parapets and walls above roof levels are being rebuilt on the south wing and the repointing has been completed.

Last October, the scaffolding structure’s temporary roof was opened so that a crane could lower eight lintels and one beam into place. A 100-tonne crane was needed to lift the lintels, which weigh one and a half tonnes each, to go over the windows.

Since then, the first batch of granite slabs that will be used to cover the roof when it’s finished have been delivered. Having made reference to original drawings by Lutyens and photographs of the castle, the restoration team has cut and finished these to match his design as closely as possible. The slabs are also being tooled in the same way as the originals were and as such will reinstate Lutyens’s architectural vision.

So what next? A waterproof membrane will be laid on the concrete roof deck, then the rebuilding of the masonry on the south wing will be completed. The scaffolding will be taken down and the first section of the restoration revealed in the spring. Work on the final phase will then start in the summer, with completion planned for the end of 2016.

This winter, the castle’s collection has been moved to other areas of the building accessible to visitors during the next phase of repairs.

Furthermore, from March 2015, visitors can see several specially commissioned artworks which help tell the stories of Castle Drogo, the people
who built it and the family who lived here. The participating artists include Mdesign, Dovetail Foundry, Jill Smallcombe and Mike Smallcombe.

For opening times, see Lutyens Houses and Gardens Open in 2015.