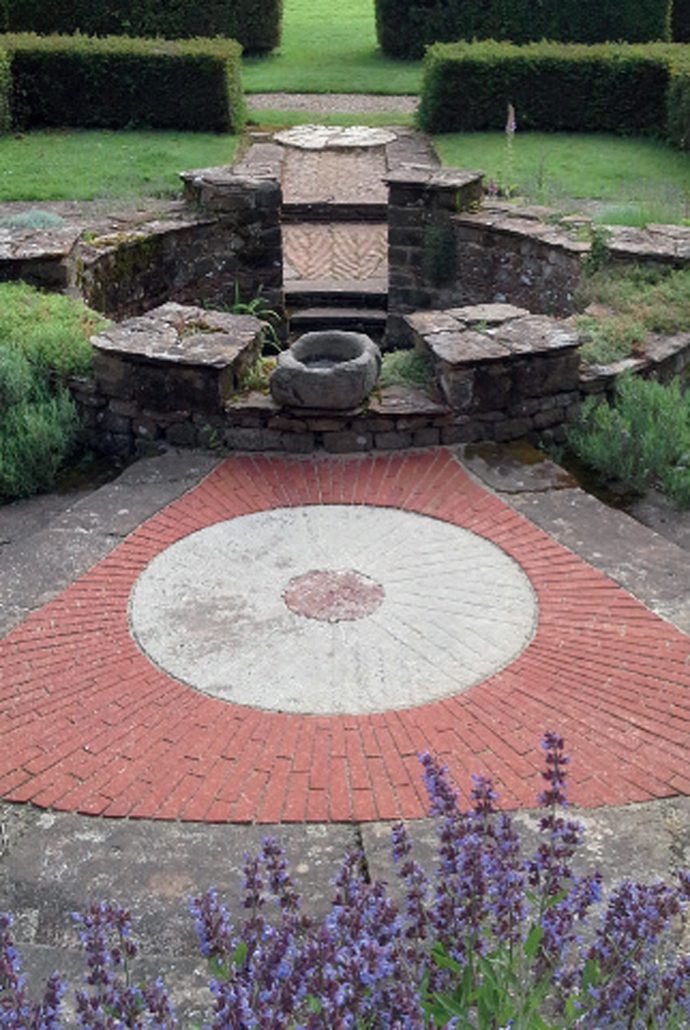 Damaged Brick Paving in Goddards’ Garden has been Expertly Restored

One of the more notable features of the West Garden Court at Goddards, designed by Lutyens, with planting by Jekyll and contained within the projecting wings of the house, is a series of millstones with brick paving radiating from them. Lutyens and Jekyll used these so regularly — indeed for over 30 years — that they have been described by Lutyens biographer Jane Brown as “almost the partnership’s trademark”. At Goddards, these features date back to when the house was first built as a holiday house for “ladies of small means” in 1898-1900. After nearly 120 years, it is not surprising that the brickwork has deteriorated, not least since the bricks were cut down to form elegant radiating sections and thus have lost their protective “fire skin”, making them much more vulnerable to frost.

Several Lutyens Trust trustees had been keen to see the two most affected areas restored, and Phil Munnery, who undertook this work, came highly recommended by Michael Edwards. Michael knew about the repairs Phil had done at Sullingstead, also in Surrey, and so I was delighted to be able to secure his services at Goddards.

The two areas were tackled in March, 2016. The first — and worst — area, to the east of the dipping pond, has been completely renewed (pictured left). Luckily, some warm, orange-red frogless bricks that the Landmark Trust sourced for repairs when we restored Goddards in 1997 were still on site, and these proved ideal. While the new brickwork is brighter in tone than the original bricks, it would have looked much like this when newly done and, in time, will surely weather. Every piece had to be cut to a tapering fit, making this painstaking work — and, with all that cutting, potentially messy. But Phil did an excellent job. The bricks were bedded on to a fairly dry lime and sharp sand-mortar mix, and in fact were not pointed up with mortar. Instead, the narrow joints were filled with dry silver sand, which was brushed and tamped tight into the joints. Because the brickwork has a stone border, it should remain in position.

The few bricks that could be salvaged were reused in the second area, under the south-facing sitting-room window. Here only the worst bricks needed to be replaced.

There are a several other areas that in time would benefit from Phil’s meticulous attention and we look forward to welcoming him and his craftsmanship at Goddards again in the near future.